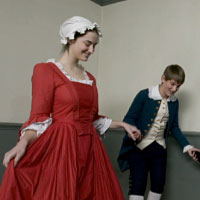 Kelly McEvoy: Well, first of all, a peer teacher is basically the person that mentors the other children in the program. Kind of supervises them, makes sure that they know what they're doing, and helps them with other guests in the area.

Lloyd: What do volunteer dancers do at Colonial Williamsburg?

Lloyd: I asked for that, didn't I?

Kelly: (Laughs.)Yeah. But mostly, we just dance in the Historic Area. We display dances to visitors, and also have them join in with us. We teach them the dances, the honors, courtesy, and so forth.

Lloyd: So you're doing 18th-century dances. Modern dance is something else. This is not frug and stuff. You said the youngest girl was 11?

Kelly: We have several 11-year-olds, actually.

Lloyd: You've used the word "courtesy" or "courtesies" a couple of times. What is that?

Kelly: It was a gesture of respect to acknowledge someone. For ladies, it's the curtsy, and for gentlemen, it's the bow.

Lloyd: I thought that might be it, but my thinking doesn't necessarily make it so. How long would it take â€“ you may know, or you may have to guess â€“ I am a father in the 18th century. I have a 5, 6, 7-year-old daughter. I've been fairly successful, I'm fairly well off. I can afford things. How long would it take my daughter to be proficient in dance?

Kelly: Well, to be proficient in dance, especially if you were of the upper class, that would consist of several things. Of course, country dances, which are the easiest. Then the minuet, of course, is something you'd have to learn if you were of the upper class. That would take years, depending on how good you were. Some people get it just like that, some people don't. For a young girl, she'd probably start taking classes, it would be 8 years old, 8, 9, then start going to balls and so forth probably around the age of 14 or 15. Probably it would take that long to get it down very well.

Lloyd: Why was the minuet so difficult?

Kelly: It consisted of very fine steps. At a formal entertainment, it was done one at a time, so you really had to know this dance.

Lloyd: So you couldn't fake it.

Kelly: No, people would know if you were faking it. It was done one couple at a time, and people definitely critiqued you on how well you did.

Lloyd: That sets up a competition that's pretty ruthless. Each couple has to go and try and out-dance every other person in the room, which could be a little bit difficult.

Kelly: It was done in order of rank, so, by the end of the dance, you knew where you stood. So, if you went last in the minuet, well, you know your place.

Lloyd: The only two dances from that period that I have ever heard of are the gallop and the gavotte, and they're both French dances, I think. I don't know if they ever came across the sea to the colonies or not.

Kelly: Actually, during the Revolutionary War, French dances were very popular, because, of course, the French were our allies. So, French dances did become popular, like cotillions and other dances like that.

Lloyd: I am not a dancer, and I have no background in it, I have no idea what a cotillion is.

Lloyd: How long have you been dancing?

Lloyd: Is it still fun to you?

Kelly: Oh, definitely. There really isn't anything better, I think, than getting up on stage at Revolutionary City â€“ they have a stage now â€“ so, I actually kind of like that. We get to go on stage and really kind of act it out and make it fun for the visitors to watch. I really enjoy it.

Lloyd: Do you ever get to the point where you say, gee, I'd rather go swimming, or I'd rather do something else this afternoon, rather than put on this huge outfit and go stand on the stage?

Kelly: I have to admit, there have been times when I have just wanted to throw all my layers and layers of clothes off and just go jump in a pool, but it really is worth it. I like it a lot. It's fun. There are other things you could be doing, but that's one of the things I would rather be doing â€“ dancing.

Lloyd: Do the guests ever get to talk to you?

Lloyd: What do they ask you?

Kelly: First of all, are you hot in that costume? Especially dancing outside. We're outside most of the day. Occasionally, we go into the air conditioning in the afternoon. And they also ask us how long we've been dancing, if we enjoy it, how old we are, and things like that.

Lloyd: How about the children of guests, or the guests' children, do they have questions for you as you're standing there decked out in 40 layers?

Kelly: They do, sometimes. The little ones can be a little shy at times. But we get them into conversation, and we ask them to dance with us. They'll usually comply, unless they're really shy, in which case, they'll just cling to their parents. Usually we get them interested.

Lloyd: Are the dances simple enough that a kid could learn a step or two fairly easily?

Kelly: There are a few dances that we have for audience participation which are the easier dances that we know. For example, "Rosie Lass" consists of turning your partner by the right hand and galloping down the set and back. It's fun for a kid to do, and it's easy, too.

Kelly: You know, I'm really not sure. I definitely enjoy it, and that's why I've done it as long as I have. I guess whenever I'm ready to move on, that's when I will. Of course, one of the other junior interpreters will soon move into the position of peer teacher. So I don't know, we'll see what happens.

Lloyd: So it's one of those things like you know when it's time to stop. Well, that makes sense. When you're dealing with the younger children who are under you, do they have an opportunity to show off their skills? Does everybody dance?

Lloyd: How was dancing part of it? If you're wealthy, sure, you've got balls and things at home, and then you're going to the governor's ball, I presume. But let's say now I have fallen in rank. I am a middling tradesman, I have some money, not a great deal, how does dancing affect my family?

Kelly: It's definitely just as important as it would be for the gentry class. It still showed your standing, how you performed in public. As for learning dancing, for a middling sorts child, it would be a little bit different. Probably you would learn from your parents, or maybe a gathering of children with a dancing master in town. Also, books they could read to learn dancing.

Lloyd: There were dancing books?

Kelly: Dancing manuals that had dance figures, how to perform the courtesy, rules of civility. It sounds boring.

Lloyd: No, it doesn't sound boring, but I'm trying to think of learning a dance by reading about it. I think it would be a lot easier if you could see what the steps were supposed to be.

Kelly: Pretty much everyone knew how to dance, so of course, children would be able to learn it firsthand with others. But those dancing manuals were there to fall back upon.

Lloyd: I'm going to guess dancing is less important to families now than it was then?

Kelly: Definitely. It did. In the 18th century, courtesies are not only, well they are of course, like I said before, a gesture of respect, but they were used to enter and exit a room, to give and receive a gift, to begin and end a dance â€“ it was part of everyday life. It needed to be learned to be acceptable in social situations. I think you could definitely tell who was better bred because of the way they performed their courtesy. Of course, if someone just did a sloppy courtesy, you could tell that they weren't instructed very well.

Lloyd: Or they wanted to offend you.