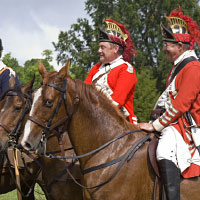 The Revolutionary War wasn’t always a winning proposition for the colonists, explains Tim Sutphin. “Under the Redcoat” recalls the British occupation of Williamsburg.

Learn more: Under the Redcoat

Lloyd Dobyns: Hi! Welcome to Colonial Williamsburg: Past & Present on history.org. This is “Behind the Scenes” where you meet the people who work here. That’s my job. I’m Lloyd Dobyns, and mostly I ask questions. This time, I'm asking Tim Sutphin, who is preparing for Friday's opening of "Under the Redcoat," a three-day reenactment focusing on the 1781 British occupation of Williamsburg. Seems to me like a weird thing for Wiliamsburg to do.

Lloyd: I thought that question got settled rather a long time ago.

Lloyd: There are very few places that I can think of that sort of celebrate losing, which, for a brief period, we were doing.

Tim: Right. It's very interesting for our guests and for our reenactors. The reenactors get to occupy a town, which is something that they don't get to do at all, any other place. They go out in the middle of a field and fire muskets, usually. For our guests, it's neat because we don't know, as Americans, what it's like to be occupied. Here's a small taste of that in the 18th century.

Lloyd: If your function is education, this is a part of that education. It wasn't all easy; sometimes we lost.

Tim: Right, and the interesting thing about this event is that it's happening at the exact same time of history: late June or early July. The Continentals came in right after the British. The British kind of said, "OK, we're done with Williamsburg. We'll move on." And the Continentals said, "Fantastic, we'll come back in and liberate the city."

Lloyd: Would they have said "liberate"? I'm just trying to think – was it a liberation, or was it just one guy left, and the other guy came in because the first guy left?

Tim: Well, that's the real history. One guy left, the other guy came in. But the Americans were still trying to work on that image of, we're victorious, we drove the British out. The British actually crossed the James, so the Americans could actually say they drove them out of town and off this peninsula.

Lloyd: The only thing I remember about the British occupation – somebody wrote in his diary that when the Brits arrived, he had never seen so many flies anywhere in his life. The British forces travel with their own swarm of flies.

Tim: This also gives us an opportunity to, we do have some loyalist reenactors coming in, so it also gets to tell that story of, you're not always talking about foreign invaders, the British themselves. You've got folks who lived here, who were born here in the colonies fighting for the British cause.

Lloyd: As I remember – and anything done with my memory is suspect – something like 25 to 30 percent of Virginians of that period were loyalist.

Tim: That's correct. It was kind of a division of thirds: loyalists, those that really didn't care, and the patriot cause.

Lloyd: You forget that there were those in the middle who didn't care one way or another.

Tim: They just wanted to get along with their lives, that was it.

Lloyd: Whatever you want to do, governor, that suits me.

Tim: Right, it's not going to affect my day-to-day survival.

Lloyd: There's really no way to show that, is there? You can show British arriving, because they've got red coats and muskets when they arrive, but …

Tim: You can show it in some of the small vignettes, but you couldn't really base a reenactment event, a weekend like that, on those folks just wanting to get on with their lives. You could go into a trade shop today, and the tradesmen might say, "Look, I'm just trying to practice my trade, I'm trying to make a living. Yes, the British are here today, the Continentals will be here tomorrow, my life doesn't really change."

Lloyd: And yet, in real life, I'll bet that's more common than we'd ever expect.

Tim: I would think so, yes.

Lloyd: You politicians want to fight a war, by all means, but leave me alone. I'd like to sort of stage that. That would be fun. When the British arrive, you've got guests here, and here come the British in the red coats, and their fifes and drums, and the muskets, and the occupation of the, what's it called, village green?

Lloyd: Market Square. I come from a smaller place, so it was village green. What do the guests who are here ask?

Tim: Several things. We have guests who are there expecting it, who've come for this weekend. They know what's happening, they know why all of the sudden the British are here. You have those that have been visiting that day, who have been kind of primed through our interpreters. We have some programs that we at Colonial Williamsburg do with our employees that talk about the short arrival: "They're going to be here soon, what are we going to do," type of thing. Then you've got the folks who just kind of stumble on it. They walk up, the camp is being laid out on Market Square by guys in shorts and t-shirts sometimes, and, what's going on here? They're able to say, tomorrow morning, you're going to see an entire camp laid out here on Market Square. You're not going to see any sort of modern intrusions. It's going to be a British camp, and we're all going to be British. So you get those three kind of diverse: those that come every year, those that say, "I now know what's going on because I was here this morning," and those that stumble in to the town that afternoon and encounter the preparation for that event.

Lloyd: That brings up another question. Why would people want to come back, year after year, to see the British occupy Colonial Williamsburg?

Tim: It is a unique program, I would say, in the world, and definitely in the nation. We're recreating an occupation of an 18th-century town. We talk about wanting to bring the town alive – they bring the town alive. They're patrolling the city, they're approaching visitors and going, "What's the password? Are you loyal to the king? Oh, you haven't signed your loyalty oath yet? You need to go to the guardhouse and sign a loyalty oath." So, it's a unique experience for anyone.

Lloyd: Because I have a perverse nature, I am sitting here thinking if a redcoat walks up to you and says, "Have you signed your loyalty oath," I would be sorely tempted to say, "To whom? Which loyalty shall I swear today? Because it's going to change tomorrow."

Tim: Well you don't know that during this weekend. You think they're here to stay. But they'll inform you very clearly who you're signing the loyalty to.

Lloyd: Well, I suppose that would be easy to do, were you a redcoat in those days, because you were fighting for the king. You were in the field, he was paying you in one way or another. Your efforts had to be in his regard, assuming you wanted to continue to be paid. So even the redcoats were just trying to get along.

Tim: They were doing their job, right. For them, for the British, this was a British colony, and they were trying to keep it that way. So it's a different perspective to what we think about today.

Lloyd: How many British were there in the – you can't say invading force, because they weren't really invading – but in the occupying force?

Tim: I don't know. It's upwards of thousands. It was an army, it was Cornwallis' army. So you're talking many thousands of people.

Lloyd: I also get confused on this: Cornwallis had come up from the Carolinas, Clinton was still in New York, so he had the bulk of the British troops there.

Lloyd: He moved around Virginia quite a bit when he came up from Georgia and the Carolinas. But it was more from Richmond towards the coast than toward the mountains.

Lloyd: Now, that was the period when Lafayette had been sent to Virginia to harass or upset Cornwallis.

Lloyd: It begins to make sense, but you've got to put an awful lot of things together to draw it all in. It's still sort of odd that you would be celebrating the fact that the Americans lost, for a brief period. While the redcoats are here, are there any skirmishes staged, or drills staged, or musket firings?

Tim: Oh yes, daily. We don't do skirmishes because it is an occupation of the town, so your skirmishes would have actually happened outside the city limits where all the guards were posted. But we do have musket demonstrations, we have Cornwallis here inspecting the town and reviewing the troops, we have artillery demonstrations. We do have British mounted troops – dragoons – here also, on horseback. They're doing demonstrations, they're doing third person demonstrations of the types of skills necessary to be a dragoon, or to be an artillerist, or a musketman.

Lloyd: That ought to be a bunch of fun. I like artillery.

Tim: It's very loud. It's a great weekend. We've got 500 reenactors in town, so the town really does come alive. We've got activities that start midday on Friday with the taking down of the Continental colors and the raising of the British flag on the Capitol. Then, the army marches in, martial law is declared on Friday, and then full swing on Saturday and Sunday.

Lloyd: Five hundred people, between the Capitol and Market Square is a lot of people. That is a limited area, at best.

Tim: Right, and we're not just talking soldiers, we're talking camp followers, and children. What a normal army in the 18th century would have had with them.

Lloyd: Bet you won't have the redcoats' flies.

Tim: I don't think we'll have the redcoats' flies, I hope not.

Lloyd: Under the Redcoat runs June 29 through July 1. You can find more information on our Web site. That’s Colonial Williamsburg: Past & Present this time. Check history.org often, we’ll post more for you to download and hear.