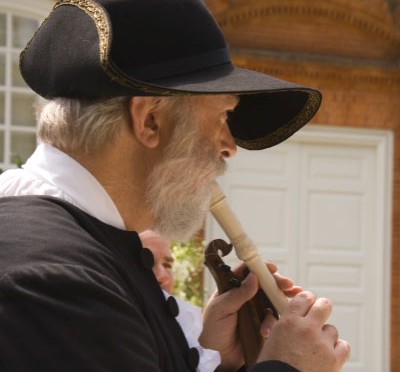 Lloyd Dobyns: Hi! Welcome to Colonial Williamsburg: Past & Present on history.org. This is “Behind the Scenes” where you meet the people who work here. That’s my job. I’m Lloyd Dobyns, and mostly I ask questions. This time, I’m asking John Turner about Christmas hymns – the ones you thought you knew. John is program manager, and a religious projects specialist at Colonial Williamsburg. OK, since I’m asking you about Christmas hymns that I thought I knew – name one.

John Turner:  “Hark! How All the Welkin Rings.”

John:  Well, it’s the original title of what became “Hark! The Herald Angel Sings.” But when Charles Wesley first wrote the hymn, the title was, “Hark! How All the Welkin Rings.” And that was in the chorus. His brother John was in the habit of editing his hymns. Charles would often sit up late at night and write maybe 20 verses in a night to a hymn. And then John would come along – his older brother – and cut it down to six verses, or change one 20-verse hymn into three hymns, or four hymns. The two of them never quite really got along because of that.

But, “Hark! How All the Welkin Rings” was something that both John Wesley, and one of their good friends, George Whitfield, thought it was already an antiquated word. This was published in 1739, and they are using a word that some of them think is old-fashioned. “Welkin” is a word that means “the firmament of heaven.” But, Charles Wesley’s friends mostly seemed to think nobody knew that anymore, even in 1739.  So George Whitfield actually changed the verse to, “Hark! The Herald Angel Sings,” and that becomes the one we know.

Lloyd:  I have to admit, in 2006, I have never heard “welkin” until you used it today. Does anyone use it anymore?

Lloyd:   There must be another.

John:    Oh, there are plenty; there are lots of them. Just as a general statement: none of the Christmas hymns that are being used in 2006 are being sung to the tune that they would have been sung to in the 18th century. Good examples -- the one we just mentioned is one, but “Joy to the World,” for example, Isaac Watt’s most famous Christmas hymn, written in 1719, it didn’t get its modern tune, the one that we associate (Sings.) … Joy to the world … it didn’t get that tune until 1820, more than 100 years later.

Lloyd:  What was the original tune?

So, any hymn could be set to any tune that fit the meter of those poetic verses. So for example, “Joy to the World,” the one I just sang a snippet of, (Sings.) … Joy to the world … as I said, that tune doesn’t get put with those words until 1820. One of the tunes that was put with those words, that it would have been sung to between 1719 and 1820, is the same tune that was used for many years for America’s most popular hymn, according to a Gallup Poll, “Amazing Grace.”

And it’s not an easy exercise, but if you’ll try to imagine both sets of words, I’ll play the tune. This tune was often used for “Joy to the World” in the 18th century, again, in the first century of its existence. (Violin music plays.) Now, keep that tune in your head, and instead of the words to “Joy to the World,” insert the words to “Amazing Grace.” (Sings.) … Amazing grace, how sweet the sound, that saved a wretch like me … and so on. And it’s not easy, it’s easier to say than to do, to sing a hymn to a tune different than the tune you are used to. You start forgetting the words real fast.

Lloyd:  (Chuckles.) For the audience that, obviously, can’t see – the instrument he played looks like a toy. It is not, it is a real, live musical instrument, because clearly, he just played on it.

John: It is not only not a toy, it is actually too big for a child. It’s an instrument called a “pochette,” that’s the French word for “pocket,” p-o-c-h-e-t-t-e. The English usage shortened the word from “pocket” to “kit” and referred to these instruments as Dancing Masters’ kits. But not only dancing masters used them, but virtually anyone who played the violin when they were traveling.

We know that Thomas Jefferson had at least two of them during his lifetime, and specifically talked about having one in his saddlebag when he rode on horseback down Duke of Gloucester Street and heard a young lady, who turned out to be his future wife, playing the harpsichord coming through the window. He took his pochette, or his kit, out of his saddlebag, went to the front door, and asked if he could accompany her. Permission was granted, and that’s the way his courtship of his future wife began.

This instrument I’ve just played is about as simple as these instruments got. It’s a copy of one made in Dublin in 1780, and characteristic of these instruments, they’re not put together the way a violin is. This one isn’t even violin-shaped, although many of them are. This one is actually guitar shaped, or “cornerless” shaped. But in this kind of instrument, because they knew they were going to be knocked around people’s pockets and saddlebags, only the top is glued on, whereas with a normal violin, its all thin pieces of wood glued together. Here, only the top is glued on. The rest of it, from stem to stern, is carved from one piece of wood, so that makes it much stronger in construction.

Lloyd:  I’m still trying to figure out Thomas Jefferson with a pick-up line of, “May I accompany you on my kit?” That’s sort of forward, don’t you think? Or do you think?

John: (Chuckles.) No, I think that the woman was, it was the first time, according to the story, it was the first time that she had played music since coming out of the prescribed mourning period for her late husband. This was her first coming-out day, and she was exercising it by playing on the harpsichord. And Jefferson happened to be there at the right time, and heard the music and asked if he could accompany her. She said yes.

Lloyd:  I’m curious, because we were talking about Christmas music, and you gave us a demonstration. Was Jefferson ever known to play Christmas music? He was quite a musician, and loved to play.

John:    Jefferson was quite a musician, and did have an extensive musical library in his home. People didn’t tend to talk about music as Christmas music the way we would today. They would think more in terms – the tunes we’ve talked about so far, “Hark! How All the Welkin Rings,” “Joy to the World,” and “Amazing Grace” – they’re all hymns in the church, but in the 18th century, they were popular music, and the one place that you couldn’t have sung them in Williamsburg was in Bruton Parish Church. Because, in Bruton Parish Church, prior to 1776, only the Psalms of David were permitted to be sung.

And of course the organ could play other instrumental music, but the popular hymns – those being written by Isaac Watts, and then by Charles Wesley, and John Newton, the author of “Amazing Grace” – those were considered popular music, and, at least by the Church of England, they were considered still vulgar. They were considered outside the sanctified, accepted body of music for the church.

So Jefferson wouldn’t have thought of it in terms of Christmas music. At Christmas they’d play hymns, he might have played some of the same tunes I just played, but rather than thinking of it as Christmas music in the way we do, he would have thought of it in terms of the actual holy day of Christmas. And then the music that you’d play at Christmas would mostly be the dance music and the popular music of the time, which these hymns were part of at that point.

John:    Well, that’s a very long story, and I’m not sure I can answer that in a very clear way, but I’ll try. You have a great variety of responses to that question across the 13 colonies. In Virginia, as I just said, the accepted vocal music inside the church was just the Psalms of David.

The popular hymns that were being written during the period we call the Great Awakening from the 1740s to the 1780s, those were part of popular music. It was the kind of thing that you sang while you waited for the ferry. George Whitfield talks about the 12-hour crossing of the Albermarle Sound on some kind of watercraft, and singing hymns, these kinds of hymns, with the other people on the watercraft.

There were responses throughout the 16th, 17th, and 18th centuries to what was seen as a problem of over-celebration of Christmas. The Puritans, during the Cromwellian period, the celebration of Christmas was actually outlawed in England. England, more or less during that period, left Virginia alone, and there are very few records, if any, of how people celebrated Christmas during the middle of the 17th century, because they just didn’t write about it. They didn’t talk about it. They might have said, you know, “Did so-and-so” in their diary, but they didn’t celebrate in the way that we think of celebrating Christmas today.

And so, that ban on the celebration of Christmas in the middle of the 17th century in England translates to this country. In New England, that ban continued to have an effect, and it wasn’t until the 20th century that it became legal to have Christmas as a school holiday, and so on, in Massachusetts, for example, you still had people working on Christmas day.

Lloyd:  So what we have as the celebration of Christmas was, for any practical purpose, unknown in the 18th century.

John:  Largely so, yes. Certainly, Christmas was a popular time for weddings, it was a time when people got together, and the people who could afford it, had balls and parties and so on, and a great majority of people would have gone to church if they were able physically, or could get there on Christmas day. Christmas day was one of the four times of the year that you would take communion at the church.

Lloyd:   I’m finding out all sorts of things. What we consider Christmas hymns, were popular tunes that probably were played at Christmastime because they were dance music for the balls that the wealthy could hold.

John:   In some cases, you’re exactly right. Charles Wesley took a number of popular dance tunes and even bawdy song tunes and wrote sacred words to them. And this is a process that went back and forth throughout the 17th and 18th century, and in some ways you could also say it was part of the folk revival in the 20th century in the 1960s, where people are writing new words for very familiar old tunes.

For example, the tune “Greensleeves” was written sometime in the 16th century, and by the 18th century there were at least four or five different songs to that tune, including a holiday version written in the 17th century called, “The Old Year Now Away Has Fled.” (Sings.) …The old year now away has fled … and so on. But the more commonly-known one today to that tune would be “What Child Is This?” But that wasn’t written in the 18th century, that wasn’t written until the 19th century.