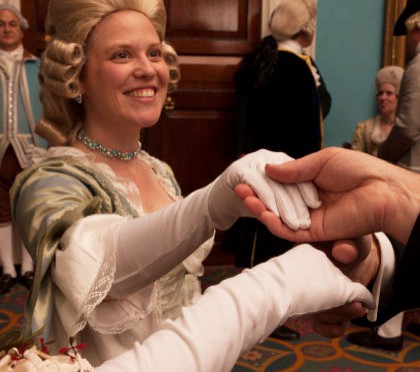 Marcy Wright: Well, so many people have the title of interpreter at Colonial Williamsburg. We research, we collate the information, and find out all about dance in colonial times so we can interpret it in movement and performance, we can interpret it verbally to visitors to share the 18th-century culture and dance in its place.

Lloyd: OK, let me share with you my ignorance. What part did dance play in 18th- century culture?

Marcy: If visitors come to Colonial Williamsburg they'll probably hear a phrase "Virginians are genuine blood. They will dance or die." They enjoyed dancing as a popular amusement, a way to gather with a more interactive social amusement. You didn't have to sit down and play cards or converse in French, but you could join in fashionable country dances and show your good standing. You could socialize more freely with country dancing. Of course, young people enjoyed dance entertainments as an avenue for courtship.

Lloyd: Ah, that makes a certain amount of sense. Specifically, because we're in the Christmas season, what part did dance play around Christmas? Any?

Marcy: A great deal, in fact, if you look at the months of December and January, there are a great deal of holidays in various belief systems and religious traditions and so around these holidays or holy days, there are festivities. That might mean Christmas day in the colonial tradition, attending church and having a dinner afterwards. But through the 12 days of Christmas, starting with Christmas day through January 6, the Epiphany, there is a great amount of entertainment -- gatherings, balls, annual festivities, to celebrate the Christmastide.

Lloyd: So these Christmas things, Twelfth Night things, are more for adults than they are for kids, because we have more for kids than we have for adults, really.

Marcy: Yes, in truth, the evening entertainments, which go into the wee hours of the morning sometimes, are more adult-oriented. They would bring entire families to neighboring plantation houses to celebrate, but I imagine the kids are sleeping at a decent hour.

Lloyd: I keep learning things. I have always assumed that the Christmas we celebrate is more or less the 18th-century Christmas. But it's not.

Marcy: Not at all.

Lloyd: So you have all these balls with the kids already asleep, and it's just hard if you've always believed one thing to get that out of your mind and start believing something else.

Marcy: Well, let me take a step back. In December, dancing lessons continued, just before the Christmas holiday. And in January, right after Twelfth Night, dancing lessons resumed, and in fact some were held right around the time of January 6 to January 8. So, in the plantation culture, itinerant masters are traveling to visit these rural plantations and the students from the circuit go to the one plantation house where the lesson is being held each month. They have a dance party and their friends and relatives attend with them and they learn perhaps a little bit of what the students were taught in their lesson. It's sort of a time for amusement and socializing, this dancing lesson. So that is one way in which children are involved.

Lloyd:  So the dancing lessons are for children?

Lloyd: OK, so you have the kids in with the lessons...

Marcy: ...that's not to say that there weren't lessons and instructions for adults, but formal dance instruction for the gentry was private lessons or group lessons. For country dancing, you need up to eight dancers to do a cotillion, the French style of country dance which is in square formation. These cousins, neighbors, from plantations close by would join at the one house for their lesson.

Lloyd: OK, I want to make sure I've got this right. Dances during the Christmas time, or Twelfth Night, are at plantation houses, big houses in the country, or big houses in the city, but they are private dances to which you are invited.

Marcy: Let's re-categorize. Dance parties are something that happens at plantation houses that seem to be the label for the dance lessons, the formal dance lessons. Twelfth Night gatherings happen in all echelons of society. There are simple puddings and cider and festival for the end of the Christmastide season. That's the most secular and popular reason for celebrating on January 6, or Twelfth Night. It's sort of the culmination of this whole Christmas holiday time. The private gatherings could be annual balls, very traditional Twelfth Night gatherings in which there is a Twelfth Night cake, with the "King of the Bean" and the "Queen of the Pea," who get their way for a day, so to speak...

Marcy: ...when they get the slice of cake with the bean or the pea in it. There's dancing at these Twelfth Night gatherings. There are other ritual or ceremonial types of dances that we don't find much in Virginia, but in the Delaware Valley where there's perhaps more of a labor population, they do some Molly dancing and they bless the apple trees by pouring cider, or what we call Lamb's Wool, a type of wassail, over the apple tree.

Lloyd: You lost me when you said more of a labor...

Lloyd: Fewer of the gentry?

Lloyd: More of the people who did something. OK.  Let's take it a little bit more. Something suddenly occurred to me. If dancing was sort of a celebration of things and you had fun, was there any in New England? Those people always struck me, in that period, as being rather stiff.

Marcy: The two main problems with dancing in the Puritans' mind were mixed dancing, mixed sexes. Dancing that was frivolous; it wasn't a part of simple living. But they embraced dancing for the congregational aspect. They embraced dancing for the educational benefit. If you think of the Inns of Court and the men who were educated in colleges and universities, they danced. Dancing sometimes was a part of their curriculum, their learning. These ministers, the Puritan ministers, were promoting dancing as a part of education and moving the body and becoming schooled and genteel deportment.

Lloyd: OK. I don't think I like it if you don't have the sexes mixed, though. That's not much fun. (Laughs.)

Marcy: (Laughs.) That seems to me one of the questions that came up and the concerns. Mixed dancing, obviously, is the most popular form of country dancing, of enjoying dance as an amusement or entertainment. They certainly were not condoning all aspects of dancing in the New England colonies.

Lloyd:  In Revolutionary City, I was watching two of the interpreters teaching people how to do this very simple dance. It was mixed dancing, and it was holding hands and hopping about.

Marcy:  You know, in the 17th century, in the Commonwealth, Crowell discouraged dancing because there was kissing and hugging and all of that kind of thing. It was actually written into the dances and the instructions. That sort of fell by the wayside. The Restoration came. The French dances came to the English courts with Charles II. The dancing was enjoyed again as a popular amusement, but we don't find the kissing and hugging written into the instructions in the 18th century.

Lloyd:  What a shame. (Laughs.) That seems like a really good idea. To get this straight, we've got this period, the Twelfth Night now, in the 18th century, which was the bigger event for dances and for people having fun, Christmas or Twelfth Night?

Marcy: Christmas day was a day of holy reflection, going to church service, having a dinner. We don't hear much about entertainment or great balls or festivities on Christmas day. The next day, in some areas, they might practice what in England is called "Boxing Day." They have a box they give to the Negroes with some clothes for the year. Fithian, tutor to the Carter family in the Northern Neck, gave some money to the slaves, little bits. There is some gift giving to children from parents, but that is mostly books, a small toy, something that is an article as a part of their daily life. Not a big emphasis on a material good.

Lloyd:  So for us, the comparison for us would be, Twelfth Night was a bigger celebration for adults and Christmas was a holy day, and Boxing Day might have meant some little gift giving.

Lloyd:  Just before the kissing and hugging. I love that part.

Marcy: Well, I should qualify. [It was] kissing hands, kissing cheeks, kissing faces, and lips.

Lloyd:  Kissing is kissing, that's it. That’s Colonial Williamsburg: Past & Present this time. Check history.org often. We’ll post more for you to download and hear.