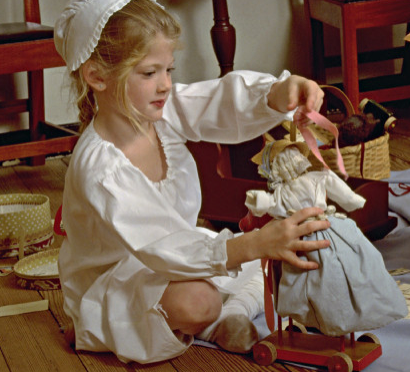 Historian Lou Powers traces the evolution of Christmas celebrations through the centuries.

Lou Powers: In the 18th century, Christmas was not a time with a lot of outward customs. It was a religious holiday, literally holy day, and people observed this by attending church and having the best meal possible. Of course, the range of customs depends on one’s pocketbook – then and now – so that among the simplest people with the lighter pocketbooks, going to church and perhaps hanging some holly would be the extent of their celebration, while the gentry may have week-long house parties, fox hunts, balls, huge suppers with many fine wines and bowls of punch and so on.

Lou: Not at all. It was not a children’s holiday until Queen Victoria in the 19th century. Remember, she married a German prince? Albert was German and the Christmas tree and many other customs come from the continent. And we’ve now incorporated them into American Christmas as emigration from Europe came to America.

Lloyd: Okay, I don’t know why I know it, but somehow I know that there was a German professor who brought the first Christmas tree to Williamsburg. Is that right?

Lou: Yes, in 1842, Professor Charles Minnegerode, who was a professor at the College of William and Mary, showed the Tucker family at the St. George Tucker House the tannenbaum. The story goes that – first of all, let me say that the Tuckers had quite a few children, and they had other children, cousins, visiting them  – and Professor Minnegerode, on Christmas Eve, cut down a little evergreen, brought it into the house, cut out paper ornaments, wired them on along with some small candles, lit the candles, threw open the doors of the parlor there in the Tucker house, and let the children see this Christmas tree.

And we know about this because an enterprising cub reporter for the Richmond paper in the 1920s interviewed one of the children who had been there. She was 95 years old, but she still remembered that first Christmas tree.

Lloyd: I guess that would be pretty impressive. I am sort of a worrier, and you said candles and paper. That doesn’t sound like something you’d want to do.

Lou: You stand there with sponges and buckets and it’s only lit for a few minutes on Christmas Eve. You don’t put it up on the weekend of Thanksgiving and leave it up until February when you’re using candles, and paper, and a natural tree.

Lloyd: Let’s jump back to the 18th Century.

Lloyd: You said it was an adult holiday, and it didn’t get to be a children’s holiday until the 19th century. Was there anything for the kids in the 18th century?

Lou: Sometimes children were given a small gift. Although, interestingly, it’s just as likely that the gift would be given on New Year’s Day as on Christmas Day. Certain things like a few coins, an ivory comb, a pair of gloves: very, very small items.

Lou: Because it’s the beginning of a new year.

Lloyd: Uh-huh! Why don’t you ask an obvious question, dummy? I am stopped by the fact that it is an adult’s holiday, so everybody is doing adult things. There’s not much for children. Queen Victoria and Prince Albert; they did things the continental way. But now it’s almost entirely a children’s holiday. Going from not a children’s holiday at all, and what, 200, 300 years later -- now it’s nothing but. Did it just grow?

Lou: I suppose it’s one’s perspective. I don’t have children or grandchildren and we celebrate our Christmas in a very adult way. My stepdaughters are in their 30s and 40s, and we have an adult holiday that includes church, fine dinner, fine French wines.

Lloyd: Oh, well, I’ll come to your house then!

Lloyd: Thank you. You were talking about dinner and fine French wine. What did the gentry have for dinner at Christmastime? Now, the poor people had whatever they could have, which took care of, what, 95 percent of the people of Williamsburg. What did the other 5 percent have?

Lou: Most anything they wanted and it might not be that much different from the fine dinners they had every afternoon throughout the year. But some of the dishes that are in season in winter are goose, some shellfish, and fish here in the Tidewater region of Virginia. And you can’t really get by without the ubiquitous Virginia ham.

Lloyd: Yeah, you’re right on that. How about the dances? Were the dances at home or were they balls in the town, or did people get together to celebrate, or celebrate by themselves?

Lou: You’ll think I’m dodging your question, but I’m going to say “all of the above.”

Lou: For a public ball here in Williamsburg, those are more likely to be in April and October, during the public times. And those balls might be held at the palace, or the capitol, or the courthouse. At Christmastime, specifically, it’s more likely to be a private ball, so that the Carters or the Randolphs are inviting people into their home, and push back the furniture, roll up the carpets and dance ‘til dawn.

One of my favorite quotes from the 18th century comes from a fellow who was a tutor to the Carter family up at Nomini Hall in Westmoreland County, and he said, “Virginians are of the true blood, they will dance or die!”

Lloyd: Well, I would prefer dancing if that’s the choice I have, thank you. To what extent, if any, in the 18th century, do you have any influence from immigrants? Have people started to bring their customs with them? Before Queen Victoria and her German husband, was there anyone who really influenced how things were done?

Lou: The Dutch in New Amsterdam, now New York, put out their wooden shoes for Saint Nicholas – it’s not Christmas, but it’s been incorporated into our Christmas celebrations now. It’s most likely that in the valley of Virginia with its many German immigrants, that there were Christmas trees long before ours here in Williamsburg in 1842, the one Professor Minnegerode put up for the Tucker Children. The same tutor I quoted just a moment ago, in 1775, was at the Virginia backcountry where there were Irish settlers, and he said that the holiday was not much observed here.

Lloyd: Okay. I was just thinking while you were talking, it would not have been much observed in New England, I should think, because the pilgrims didn’t believe in that sort of revelry and foolishness.

Lou: That’s right; we need to remember that the 18th Century was very close to the Puritans in England who had no celebration of Christmas at all…Cromwell and so on. During the interregnum, there was no celebration of holidays that were not – Sunday was the main holiday – and that because it was prescribed by the Bible. The other holidays are not mentioned in the Bible.

Lloyd: That’s right, not a one of them.

Lou: Excuse me, Easter, of course.

Lloyd: Well, that’s a different thing. So, what you’re going to do at Christmastime depends not only on who you are and how wealthy you are, it may also depend on where you are.

Lloyd: So our idea of a massive holiday, coast-to-coast, border-to-border, is completely foreign to18th-century colonies.

Lloyd: Huh! New thing I’ve learned. You may not know this; I’ll ask anyway. You know that the Christmas tree and those traditions started when Queen Victoria was in office. When did the other things begin? When did we turn this holiday into this massive children’s thing? Is that fairly recent, or…

Lou: Well, you can check this out by crazy sources, like the Montgomery Ward’s Catalogue, and the advertisements in the newspapers. It really is a post-World War II phenomenon. It’s a baby boomer thing.

Lloyd: Oh, okay. See, my problem is, I can’t remember the baby boomers have now turned sixty, which…

Lou: (Laughs.)Not quite, thank you very much…

Lloyd: Oh, I’m sorry. Actually, I was born during World War II and we had Christmas, but it was quite modest, very modest.

Lou: You prove my point, sir.

Lloyd: Yeah, I think my brother and I got one present each and some fruit in our stocking, and that was it. And, actually, I don’t think my mother and father gave each other presents. Of course, then, a lot of that was shortage. I mean, you just couldn’t get anything. For instance, if my mother wanted a pair of nylons, which was certainly a simple request, you couldn’t have nylons during the war. So it’s all after World War II; I think that’s fascinating.

Lou: Do you want another little head-twister to set time in motion for you?

Lou: Colonial Williamsburg’s so famous, and deservedly so, for the outdoor door decorations. Want to take a stab at when they date from?

Lloyd: I’m going to be wrong.

Lou: It’s a Colonial Revival idea. In the 18th century fruit was so rare, especially in December, that you’d never put apples and pears and pineapples on a door. A servant, a slave, a horse, would’ve taken those right off. They wouldn’t have lasted a day. 18th-century Christmas prints, all from England, show very simple arrangements of greens, largely holly. Perhaps in a vase on the mantle shelf, or sprigs of holly put flat against the panes of a window. That’s the extent of it. Oh, I forgot the mistletoe. Mistletoe is not exactly for children, is it?

Lloyd: Not if used properly. That’s Colonial Williamsburg: Past & Present this time. Check history.org often. We’ll post more for you to download and hear.