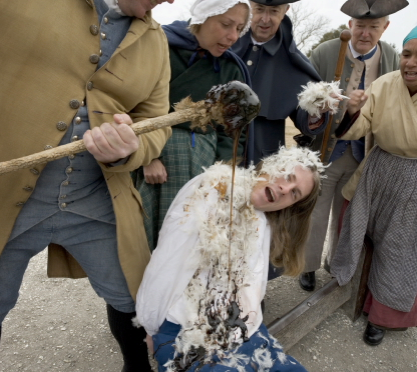 Lloyd Dobyns: Hi! Welcome to Colonial Williamsburg: Past & Present on history.org. This is “Behind the Scenes” where you meet the people who work here. That’s my job. I’m Lloyd Dobyns, and mostly I ask questions. This time, I’m asking Tom Hay, and at Colonial Williamsburg, he’s supervisor of the Courthouse. What I wanted to ask you this time was about the liberty pole, which in Revolutionary City is set up across the street from the Raleigh tavern, right?

Tom Hay: Yes, indeed. And that’s where we know there was a liberty pole set up in 1774.

Lloyd: I was sort of curious: why was it there, instead of at the courthouse?

Tom: Well, it was probably there because the gentleman who set it up, or had it set up, Archibald Kerry, was from Chesterfield County. So, presumably he may have been staying in the Tavern or entertaining at the tavern. And the whole point about burning the Prime Minister in effigy is that they were, in fact, public theater – street theater of the day. And so you’re going to get a good audience there.

Lloyd: Yeah, you certainly would at a tavern. You said something earlier to me that said that the liberty pole, or tarring and feathering, wasn’t really a punishment; it was a political protest.

Lloyd: It wasn’t very friendly. It certainly was painful.

Tom: Well, yes, it was.  But, first of all, you have to keep in mind the tars used at the time were pine tars. Not modern petroleum-based tars. So they have a lower melting point. If you go talk to our shoemakers, they’ll tell you the pine tars they use get very melty and sticky on a hot day in their shop. So, it won’t take much to get that pine tar to stick to someone. And the prints make it perfectly clear that the tars were poured over a Tory, over their clothes. And then they were feathered.

So it was public humiliation. It was to marginalize someone in society. And while it inflicted a certain degree of pain, such as Anthony Warwick in Isle of Wight County in Smithfield: He was set in the stocks, tarred and feathered, sat on his horse backwards with his hands tied and driven out of town under a shower of rotten eggs. They reallydid not like Anthony Warwick.

Lloyd: (Laughs.) Was there anything more they could’ve done to him, that you can think of?

Tom: Well, since he was a merchant and he was declared “inimical to American liberties,” that meant that his business was gone. No one would deal with him economically. So that was probably, for a Scot, hurt more than anything.

Lloyd: Yeah, that being driven out of business is a little bit worse than being ridden out of town on a rail, I think.

Lloyd: Who …  I mean, tarring and feathering sounds worse than you make it seem – but it probably was worse than it seems since we’re not having it done to us. Who came up with it? Who thought of that?

Tom: It’s ancient. The first case that we know of occurred in Boston and actually was done by British Redcoats to an arch-Patriot. And, quickly, it was reversed and became something that was done to lots of Loyalists all up and down the Eastern Seaboard. And it was a way of marginalizing them in society. It was a way of warning people not to hold these opinions -- or if you hold them, be very quiet about them. And it was very effective.

In 1774 and 1775, the few Loyalists who were willing to be extremely vocal about their opinions got, as it was known in one newspaper, got a “modern coat affixed.” And, it taught them to keep their mouth shut and thus you don’t convince other people.

Lloyd: That makes you think maybe of vandalism and thugs and not-nice people.

Tom: Yes, in a way, it does. On the other hand, if we were to take a look at the history of labor relations in this country, the labor unions never would have formed if people hadn’t been willing to take on some pretty rough customers and issue rough treatment in their own stead.

Or, a person from the time period, an American Whig, might say that if an entire city is on fire, the mayor of that town has the right to tear down a block of buildings to make a fire break. And certainly, that is an oppression of those homeowners’ rights. But there are times where to preserve the rights and interests of everyone, individuals will have to sacrifice and or suffer.

Lloyd: Tarring and feathering starts with the British, moves to the Patriot side … what else was used to discourage people, to punish people, to make people sorry for how they felt or believed or talked?

Tom: Well, there was the burning of the Prime Minister in effigy. That was open theater. It was only effigies that were tried and burnt or sometimes tarred and feathered before they were burnt, sometimes tarred and feathered, shot and burnt – and a good time was had by all! Yes, but street theater. It was a way of making these, at times, rather obtuse constitutional theories irrelevant, and you were just giving people entertainment in lieu of political education. So that was one thing.

Tarring and feathering was another. People were dragged before their committees of safety and warned not to charge too much in times of scarcity, not to import tea. Once the Continental Congress met, and they issued a ban on all sorts of frivolous activities. They were enforced by the local committees of safety.

So 1774 gives us this very narrow window where they were still trying to educate and entertain people. Then we get into 1775 and it’s a bit of a threat, or sometimes actual physical violence. And, then they very quickly with the establishments of the committees of safety, get into controlling the people through the use of force. Yet it is interesting: this is the very time period when political theory is literally turned on its heads. Before then, it was authority from the top, the king, on down. The committees of safety and the various Whig vigilantes were quoting authority of the people. So that was authority rising from the bottom up.

Lloyd: First time in history, as I remember.

Tom: I would say that was one of the first times in history that it was so well articulated. There was the Hussite Rebellion in the 14th Century, but that was all caught up in the Protestant Reformation.

Lloyd: I like that period, because you sort of wonder where the people got these ideas.

Tom: Part of it was their British heritage. I mean, it was John Locke in the 17th Century that said, “The right to rule comes from the will of the people.” But even though that thought had been articulated, it hadn’t been really worked into political philosophy. So it was the Americans who took an already-standing political philosophy and they gave it fresh blood, fresh meaning. And they took it to a level beyond what the British were comfortable with and, in fact, fought against.

Lloyd: You wonder how a philosopher like John Locke suddenly has a liberty pole set up across the front lawn of Raleigh Tavern and you say to yourself, “Was that necessary to teach or to educate people?” And I guess the answer is, yes it was.

Tom: I think it was, because if the right to rule comes from the will of the people, the very first thing you have to do is you have to have a consensus amongst the people.

Lloyd: You have to have a will of the people.

Tom: Right. And that’s done partly through education. And at all times in history, there’s always going to be a certain degree of intimidation, whether physical or political or intellectual against people whom you disagree with.

Lloyd: That’s easy enough to see. Other than arguments and fistfights and throwing tea in the York River and Boston Harbor, how else did people make their will known?

Tom: Well, there were a number of different things. I mean, the committees of safety that I mentioned earlier were very careful to be put into position by election of the people. And, since for a time period they were the political replacement for the judicial courts, which were going into kind of a phased shutdown, not quite totally shutdown, but doing a lot less than they had. And in Virginia, the first committees of safety were the local judges. So the people elected their traditional leaders.

A year later in 1775, when it was clear that Parliament wasn’t going to give in easily and it was going to require a much greater effort, the committees of safety, in effect, doubled in size. And for the first time in Virginia, they made the conscious decision to bring in the middle class and put the middle class in positions of leadership, so it was no longer the gentry stranglehold on positions of leadership.

Lloyd: So the will of the people started to include the middle class.

Lloyd: Now, did the lower class ever become the will of the people?

Tom: Yes, I would say they did, but it was in ways that public leadership was comfortable with. I mean, Mao Zedong said that “power flows from the mouth of a gun.” You’re not going to have a revolution without privates in ranks. And Virginia did raise 15 continental regiments – the most of any colony – to secure our independence. And that was political action by being in uniform for the lower classes.

Lloyd: Yeah, well, you certainly couldn’t have raised 15 divisions without the lower class.

Tom: Fifteen regiments, plus two state regiments, plus a state navy, plus a state marine corps, and then plus recruits to the Continental Marine Corps and Continental Navy. So Virginia made a tremendous military effort. And as history constantly teaches us, there are times where, as much as we like to keep a separation between politics and the military, sometimes they blend together – particularly during political revolutions.

Tom: Well, it is, but also, at the same time, if you want people to question authority figures that they previously held in respect, you have to marginalize them. And holding them up to ridicule and contempt is an effective way of marginalizing people.

Lloyd:  One of the things journalists have done so well for all these years.

Lloyd: Oh, is that true?

Tom: Yes, there were a few before, but they really got – well, they became widely popular during the American Revolution.

Lloyd: Now, how much did that have to do with people not being able to read, so cartoons would be an effective way to communicate to everybody?

Tom: There was probably some of that. Figuring out what literacy rates were is a challenge. Because, at most, we can make guesses about what they call signature literacy: when you look at people who signed petitions. And you see lots of people signing their names, but as we know today, there are functional illiterates who learn enough to sign their name. So it’s difficult to be precise, but at all times, there are people who are convinced pictorially that would not be convinced through the use of text.

Tom: And still does.

in Government, Revolution | No comments