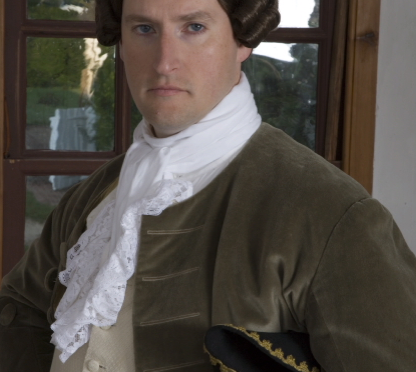 Lloyd: The first obvious question is, what does the Manager of Performing Arts do?

We also have an 18th-century play series that runs in the evenings, and I manage and direct those productions as well. I also have some contribution to our new Revolutionary City program, in terms of managing the program daily and also directing some of the scenes that go into that.

Todd:  That’s an element of it. The program’s constantly evolving. If you saw it in the spring, you might have seen a different product than what you’ve seen this summer. And it’s going to change again, for each season. It’s a little bit different. So there’s some of that involved, but it’s also, we like to add new scenes and let some other scenes rest for a while. So as those new scenes come up, there can be some involvement in writing, editing, directing, and staging those new scenes.

Lloyd:  You said two other things that I was sort of interested in. Your actor-interpreters.

Todd: All right. We have usually, at any given time, we have two plays that are up and running as part of that series. And they can be what are historically called “after pieces.” In the 18th century, a full evening of theater could last for several hours. You might start at 6:00, or 4:00 in the afternoon, and go well into the night. Our modern audiences don’t have that same sort of stamina, so we select one aspect of that – usually an after-piece which might be about an hour long. It’s usually a light farce or a comedy, or a more substantial comedy that might run an hour or a little bit longer than an hour.

As we move into the next year, we’re looking at broadening the repertoire a little bit. So we’re hoping to add some Shakespeare, maybe some more substantial plays. But we want to keep a nice mix between the lighter and the slightly more substantial to give the guests a nice variety.

Lloyd:  Now I’m going to take a wild guess here: if you started in the afternoon and lasted well into the evening, could that be because entertainment was not always available, and when you got some you wanted a bunch of it?

Todd: That’s certainly part of it, yes. Plus people used that opportunity as a social occasion. The audience isn’t darkened as we think of a modern theater, so you’re certainly going to the theater to be seen as well as to see whatever the entertainment is. So you’re well aware that you’re on display. So if you’re a member of the gentry class, the upper class, you’re certainly going to be wearing clothes that you want to be noticed in. And then it does offer a lot of opportunities for people to see a lot of different types of entertainment. Music, dancing, special tricks, plays. They really are going for that full experience.

Lloyd: I had not thought of that: the theater can’t be darkened because it’s candlelit.

Lloyd:  So you’d have to put the candles out, which is not a good idea. So everybody is part of the show.

Todd:  Exactly! And to that end, they actually would in some cases, have seats on the stage for some members of the audience as well in some cases.

Lloyd:  That would be very disconcerting if I were an actor. To have members of the audience seated on the stage. Was that sort of normal, and  . . .

Todd: (Interrupts.) Well it varied depending on the theaters, but it was not unheard-of. It was common enough that the actors accepted it as a necessary evil. There are some instances we know of patrons of the theater, gentlemen, who wanted to actually get involved in the shows, so they would usually for a fee, actually pay to have a certain play done at a certain time, actually pay to have a role in the play. So that was their chance to kind of have their moment in the sun, in terms of a theater production.

Lloyd: I’m taking a guess: people who have told me that they wanted to be in plays, and would actually pay to have a role, usually weren’t very good.

Todd:  Well we don’t have much documentation on the reviews of those productions . . .

Todd:  . . . but, not unlike some arts arrangements today, if you had the money, you could have what you wanted to have happen, happen.

Lloyd: Well if lasted for six hours, there certainly would be plenty of opportunity to put you in there. What is the Play Booth Theater? You’ve mentioned that a couple of times and I never asked you what it was.

Todd:  The Play Booth Theater is our daytime performance interpretive venue. It’s on the Palace Green not far from the Governor’s Palace, and it’s on the site of one of the first theaters in North America that was built by a man named [William] Levingston. So that’s our space for daytime interpretive programs and guests can come and they can experience a little bit of everything.

They can get a sample of what an evening at the theater might be like, some of the programs are a little more focused on specific topics, like theater and the American Revolution, or more specific topics like that. But it’s our daytime space; it’s just sort of an outdoor, open-air venue and it’s very informal and it can seat a couple of hundred people if it needs to. It’s a chance for the guests to come and just get a little 20 or 30 minute taste of what the theater might be like.

Lloyd:  Play Booth Theater and it’s outside. So there’s no booth and there’s no theater. . .

Todd:  Well I guess that speaks to theater being more than location, but more being an event.

Lloyd: I read somewhere, and I have no idea where I read this, and it could be completely wrong and it doesn’t bother me a bit. Were Punch and Judy shows done in those days?

Todd:  They were. They were, we have some documentation of them. Not as extensively done in the colonies as they were in England, but they certainly were known, and they certainly might make an appearance now and then.

Lloyd: What was the most popular thing in the theater? Was there a type of play that did better than others?

Todd:   We really see a lot of two things basically. We see a lot of old classics, Shakespeare – now the Shakespeare plays were almost always adapted for an 18th-century audience. David Garrick, one of the biggest names in 18th-century theater was certainly well-known for adapting and rewriting Shakespeare to match the sensibilities of the audience and also his own personal vision of what these plays should be. So we’re seeing a lot of Shakespeare adaptations, and those were comedies and tragedies both.

And we’re also seeing contemporary comedies of the time by the British playwrights. A lot of Garrick’s original pieces themselves, also some others by [George] Farquhar, and some of the other major playwrights of that period. So they liked new comedies, and old classics.

Lloyd: I had never considered that Shakespeare might have to be adapted for the 18th century. But I don’t see why not – I mean it certainly would make sense. I simply had never heard of it before. Was there children’s theater in those days for the 18th-century kids?

Todd: Not specifically so. Going to the theater really wasn’t seen as a children’s pastime. It was certainly a place to, as I said earlier, a place to go to be seen, a place to be entertained. Oftentimes, now not always, but oftentimes the subject matter of the plays would deal with marriage, courting, wooing – they could be a little bit on the bawdy side at times. So it really wasn’t something that was designed for or necessarily enjoyed by children.

Todd: Sure, of course. In fact, at the Play Booth Theater, one of our very popular shows is called “Theater for the Young.” That’s really a very interactive program where the kids in the audience and sometimes the adults as well get a chance to come up on stage and take a role in a really fun play about one of Virginia’s own patriots.

Lloyd: I am almost tempted to ask, do they have to pay for it, but I suppose not.

Todd: (Laughs.) Well, I guess their admission ticket is their payment, but it’s a very fun show, and kids very young and older children really seem to enjoy it as well. And the parents do, as well.

Lloyd: What’s it about?

Todd: It’s a story about one of Virginia’s patriots, Man Paige, and his role in alerting the government here in Virginia, the local leaders, letting them know about an impending advance of troops into Williamsburg and his role in thwarting that. And so it’s very fast-paced, it’s very fast-moving, and no matter if you want a large role, or just a role in the background, there’s space for you. If you’re one of our younger guests, there’s a space for you on stage.

Todd: Right now, we have got a company of musicians that are called The Governor’s Music. And they are a group of extremely talented individuals who have really spent their careers honing their craft with regards to 18th-century music and musicianship and the study of that.

They do a variety of concerts in the evening: they have a palace concert which is a very formal, very elegant evening of music, they do capitol concerts which are not quite as formal but still very entertaining. They do specialized events such as harpsichord concerts, harpsichord recitals at the capitol, they also provide the music in some of our sites, like the Wythe House, the Geddy House, and the Palace to really give the guests that tour those sites a feeling for the kinds of things that went on in those sites during the day. They also sometimes will accompany our dancers, and sometimes provide accompaniment or features at our 18th-century play series as well.

Lloyd: The one I saw during Revolutionary City that I liked a lot – there were two of the interpreter ladies teaching this group of maybe six, eight, ten people in very simple 18th-century dance. And then the music was played on a walking stick flute, which I thought I had never seen before in my life. And it sounded great. Do they do different instruments like that?

Todd: They do, and actually, what you saw very likely may have been some of the actor-interpreters in the Revolutionary City who are not part of the music staff. But a lot of our actor-interpreters are very multi-talented as well, so we do have some musicians in there as well. But yes, as a matter of fact, our harpsichord player, Michael Monaco, who is just an incredibly talented musician, as all of them are, he plays the harpsichord, he plays the piano forte, he also plays a small hand harp. One of our vocalists, Jane Hanson, she is very often seen singing, but yet she can also play the harpsichord and plays an 18th-century style guitar as well. So they are very multi-talented.

Lloyd: (Jokingly.) It’s a shame there’s no one here with any talent.