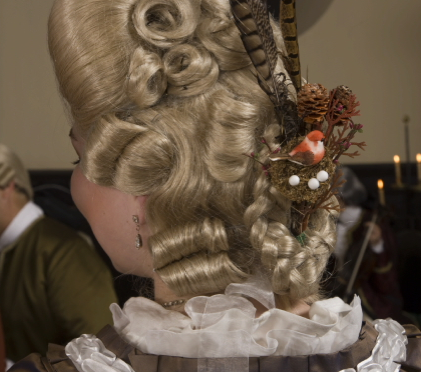 Colonial Williamsburg wigmaker Terry Lyons sees her share of bigwigs and blockheads in the King’s Arms Barber Shop on Duke of Gloucester Street.

Lloyd Dobyns: Hi! Welcome to Colonial Williamsburg: Past & Present on history.org. This is “Behind the Scenes” where you meet the people who work here. That’s my job. I’m Lloyd Dobyns, and mostly I ask questions. This time, I’m asking Terry Lyons, and in Colonial Williamsburg, she’s a wigmaker, which must make you a busy person. Colonial times were always, right?

Lloyd: That sounds a whole lot like a, “Boy, are we overworked!”

Terry: Well, we have many customers. We work in Mr. Charleton’s shop and his business was a who’s-who of the capitol. He dealt with Mr. Jefferson, he dealt with Mr. Randolph, Mr. Wythe, Mr. Henry and so he had quite a thriving business.

Lloyd: So, everybody wore wigs.

Terry: Oh, no. Ninety-five percent of the population could barely afford to feed themselves and fashion was not important to them. They were just barely putting food on the table. Five percent of Williamsburg – of Virginia – was wearing wigs, but of course that major concentration was in the capitol city. And so there were anywhere from one to nine wigmakers there at any one time. And so business was quite brisk, but primarily in the capitol city.

Lloyd: Okay, I am a wealthy planter. That’s a good thing to be.

Lloyd: Thank you. And I come in. What sort of wig do I want to get?

Lloyd: So it’s pretty much like suits you own.

Lloyd: So your wig matches your suit for whatever the occasion is.

Terry: Oh, yes. And you would have them in a variety of hairs and styles for a variety of purposes and occasions.

Lloyd: That never occurred to me.

Terry: Well, you’d get dressed for evening occasions and for business wear and for casual wear. And so you have shoes to match the outfit; the wig completes the wardrobe to the head.

Lloyd: (Chuckles.) I never thought about, “The wig completes the wardrobe.” I like that.

Lloyd: Dealing with 21st-century guests who stop by the wig shop, what do they want to know?

Terry: They are curious. Our first question is, of course, what kind of hair do we use. They have a hard time understanding that heads were shaven to wear wigs. That sort of takes them aback. That’s sort of an extreme thing to them, but we compare it to the things we do for fashion today.

They are always interested in the look of our wigs. Of course, everybody is familiar with the white wigs for formal wear, but they don’t realize that wigs were a variety of colors for a variety of occasions.

Lloyd: Okay, so now let me go back. Heads were shaven – is that the ladies, too?

Lloyd: Sorry you told me that. I’m not happy now.

Terry: Well, consider the fact that we do strange things for fashion. And the shaving of the head gave a better fit. And so you would go to bed at night, remove your wig, your wife would remove her wig; you’d both look the same.

Lloyd: I am not going to touch that on a bet.

Terry: Well, you didn’t marry her just for her looks, did you? I hope not.

Lloyd: (Laughs.) I refuse to answer.

Terry: Well, that only lasts but so long. There’s other attributes that you would have married that person for, I would hope.

Lloyd: Mm-hmm, okay, now. But I just did not know that ladies – it makes perfect sense when you explain it. It is not something that you would automatically assume.

Terry: Well, that’s a lot of what we do, is we deal with those 21st-century assumptions that people come to us with. Things that they’ve heard or perhaps seen in a movie that they think that is the truth. And we have a fun time saying to them that, no, that’s not where that came from, where it actually came – like the term, “blockhead” – people know, oh, “Charlie Brown, you’re a blockhead,” we explain to them what a blockhead really is and why that term came to be.

Terry: A blockhead is a block of wood carved of elm or ash. And it is carved to the exact size and shape of the customer’s head and that’s what we build the wig on for the guaranteed fit.

Lloyd: Oh, okay. So, originally, a blockhead was nothing more than a shaped model.

Terry: Yes, of the person’s head.

Lloyd: Yeah. All right. What do you make them out of?

Terry: We make wigs out of horsehair coming from China, goat hair comes from Turkey, yak hair from Tibet, and human hair from young girls in Europe and Asia that grow it for sale.

Lloyd: You want to try me on that one again? Young girls in Europe and Asia grow it for sale?

Terry: Well hair here, the heat and humidity makes the hair dry and brittle and not of good quality.

Lloyd: But in Europe and Asia they grow hair to sell it.

Lloyd: There’s another bit of commerce that I wish I hadn’t known.

Terry: Well, you’ll find that European and Asian hair, especially Northern Europe and Asia, they’re drinking beer, ale, and cider, and that enhances the quality and growth of the hair. They don’t tend to bleach the hair and dye it like we do as much here. And so it’s much better quality hair.

Lloyd: Is that still true?

Lloyd: Oh. I don’t know why, but I assumed that horses provided most of the hair for wigs in the colonies.

Terry: That is true even in England today for court wigs.

Terry: But other hairs are being used.

Lloyd: Okay. How do you clean a wig?

Terry: You wash it with soap and water.

Terry: And 18th-century was using castile soap that had olive oil in it.

Terry: So that put oil back in the hair.

Lloyd: Because if it ever loses all of the oil, then it’s not going to look as it did when you first got it.

Terry: Well, it will dry out and become brittle and break more easily.

Lloyd: Are people as stunned as I am that women in Europe and Asia grew their hair to sell it?

Terry: Well, I think you’ll talk to people today and they think about the extensions that are being added to hair today and a lot of that is Asian hair. So, that doesn’t surprise them as much. Especially women who are used to – who might have had extensions put in.

Lloyd: Mm-hmm. That’s sort of like a fall, or a ponytail or a whatever they’re called nowadays?

Lloyd: Okay, yeah, I can see how that would happen and how women would accept that more readily than a man who just – I’m sorry; I’m just not very up on these things.

Terry: Well, you fellas are getting more into it. Men are starting to dye their hair and such as that. And it’s no longer necessarily the things that just women are doing to their hair. Men do things to their hair as well.

Lloyd: Well, I promise you, mine is not dyed, and if I had dyed it, I would not have chosen gray.

Terry: (Laughs.) Well, 18th century, red was considered not a fashionable color. Especially the brightest of red: that indicated a fiery temper that could result in insanity.

Lloyd: (Laughs.) I’ve got to remember that. What other colors meant what?

Terry: Well, you will find color changed, especially for ladies from season to season. You’ll find that chestnut was considered a fashionable color. Brown for men. But the paler hairs were used for evening wear, for formal wear. The paler hair showed better by candlelight. But if you only had a dark wig or dark hair like Mr. Washington, then it could be powdered. But then, of course, you had to step from the ballroom to the powder room to have the hair re-powdered with a clothing brush; that’s what the powder room was for.

Lloyd: (Laughs.) I am learning all sorts of things. That was the whole – powder room – that’s where that came from.

Lloyd: Okay, I like that. I’ll bet nobody knows that.

Terry: That’s another thing that when we say that to the guests, it’s like a light bulb goes off in their head, and they say, “Oh! Powder room.” A very familiar term, but again, we’re not familiar with the origin of it.

Terry: Well, as I said, blockhead, and the more hair on your wig, the bigger the wig you were. So “bigwig” is a very 18th-century term. And those are the kind of things that the guests come to us knowing these terms, but, again they don’t know where they originated from.

Lloyd: So a bigwig was just somebody who had the money to get a pretty big wig.

Lloyd: I like that. Okay, you have your wig now. Fashion changes, I suppose then as now.

Lloyd: Does wig fashion change, or is last year’s wig good for this year?

Terry: Well, you’ll find in England it’s said fashion changed as frequently as the moon. So it was, oh, and there were hundreds of styles available. There was such thing as a French fashion called “La Belle de Poule” that had a full ship a-sail atop the lady’s head. There were, oh, “Le Zodiac.” The hair was round like the planets with a ribbon of constellations around it. So there were some very unusual styles.

Lloyd: I will guess that one of those unusual styles would have been quite expensive.

Lloyd: So only the top of the top, the bigwigs, could afford that sort of thing.

Terry: But there were inexpensive wigs. And if you came to the city as a plantation owner, you would bring your slaves with you. And when you had a party, that’s the person who opens the door, so your slave might have a wig on their head. To make that very good impression of you as that plantation owner.

Lloyd: So, wigs in general, not necessarily, were an indication of wealth and status.

Lloyd: Okay, so it’s beginning to make a little sense now. So the 95 percent of the people who didn’t wear wigs were the lower 95.

Terry: Well, like anything, you’ve got – if you think of a pyramid. Those people at the very top are the ones who have the money who are maintaining a social status. And imported goods are the way to do it. And wigs are all imported hair. And so it is indeed the 5 percent: 2 percent the gentry, 3 percent some town dwellers, but it is all about social status.