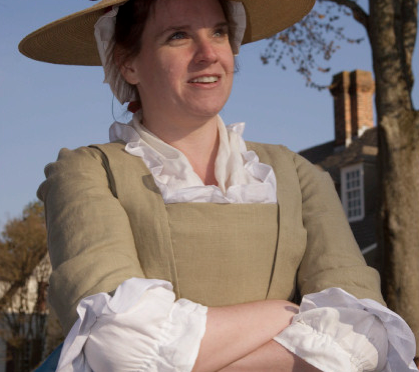 Melanie Collins answers the question, “Are you hot in those clothes?” and many more as she talks about the spark she finds each day as an actor-interpreter in Revolutionary City.

Melanie: Well, I’m part of the new program that they’ve started at Colonial Williamsburg called Revolutionary City. And within the Revolutionary City they have scripted scenes, so you need to be an actor, and they have non-scripted scenes --work that you’re out in the street interacting with the guests, so you also need to be able to interpret the time period and interpret your character, the person that you are.

Lloyd: Now, what got you interested in that - I mean, you’re a 21st-century person and you’ve learned all about the 18th century.

Melanie: Very true. Actually, I was mainly an actor and when I moved to Williamsburg, I started out only doing evening programs because they don’t ask you so much about the history; they ask you to act. And when this opportunity came up, I auditioned of course, and I was a little nervous because I know there are so many people here who have a very deep understanding of history, and although I enjoy history, it wasn’t a particular study of mine previously. And when I got the job I started training and they have been so wonderful.

The ensemble, the actor-interpreters, have been so great at helping me learn the history and it’s been so much fun. And you learn so many things that you just never would think of. Everyone has their own particular understanding of history and then someone gives you another view of it and you’re like, “Wow, I never thought of it like that!” And that just propels you to want to learn more and to share that with the guests.

Lloyd: So in Revolutionary City, who are you?

Melanie: I am a few people, actually. I’m Susannah Randolph. And I also portray Hannah Powell who becomes Hannah Drew because she gets married in 1776 -- on day two.  And also Old Maggie Smythe …

Lloyd: Who sounds kind of interesting …

Melanie: (In character.)Yes! She and her sister Aggie came from London and they are… “procurers of items.”

Melanie: (In character.) Well, you might think of it that way. They just think that they’re helping lighten your load.

Lloyd: (Laughs.) Do you have fun doing it?

Melanie: Yes, it’s very complicated because, in fact, you’re even sometimes two different characters within one day. And your fellow actor-interpreters are also different characters, so not only do you have to remember who you are, you have to remember who they are so that you can interact with them appropriately in the streets without saying, “Hi, Mr. Pendleton!,” or, “Good day, Mr. Pendleton!” and he says, “No, I am Mr. Archibald Kerry!”

Lloyd: It’s a little embarrassing at that point. What part of it do you enjoy most?

Melanie: I think I enjoy when you actually see what you’re saying clicking and making sense to people, the ideas - to the guests. Especially kids. You know, they’re really…they’ve been really getting into Revolutionary City, which is wonderful. Because sometimes history can be boring for kids, let’s face it. But this, they’re into it, they’re watching the action and you’re talking to them and, you know, explaining the Revolution to a kid and seeing them finally get it.

Lloyd: I bet history teachers love you. You can make it come to life for them, actually, if you stop and think about it.

Melanie: Actually, people have said that. Teachers, in fact, have stopped us and said that.

Lloyd: What do children ask you?

Melanie: (Laughs.) Well, the most common question from both adults and children is, “Are you hot in those clothes?” I think anyone in the Historic Area has heard that question. And, yes, it is hot in these clothes. But anyone in Virginia in the summertime is going to be hot, no matter what you’re wearing. But kids, especially when I’m Susannah Randolph, little girls love to come up and ask about the clothes and that gives me a chance to talk to them about the millinery and how you get your clothes in the 18th century. And even send them to the millinery so the ladies can go even more in-depth about the fashions. But, definitely, I constantly get questions from girls who are excited about the clothing. So that’s fun.

Lloyd: Are girls excited about the clothing?

Melanie: Oh yes, yes they are, even women.

Lloyd: I would not think people would be very excited by that clothing in the summertime.

Melanie: Well, it’s beautiful - the gowns that you would wear as a Randolph or any of the other gentry. I mean they’re just stunning to look at. And they also want to know what it’s made out of, back to “Is it hot?” And the hats and all the accessories that go along with it: did they really wear it with strings of pearls, or different beads and neck ribbons that the women wear. “Did they really wear that?” “Yes, they did.” Of course, if I can’t go in-depth about something, I send them to someone who can if they’re really that interested.

Lloyd: One of the people you play, Susannah Randolph, she was the daughter of John…

Lloyd: What is her scene?

Melanie: Well, her scene is between her and her mother. It starts out that she’s very upset. She’s been out there shop-hopping and she overhears another woman speaking ill of her, spreading some rumors that she was pretty sure had been long-since forgotten, rumors that had started up two years ago. And so that starts her off and gets her very upset and her mother is trying to calm her down. Of course, it’s very inappropriate for a lady to be expressing herself so loudly in public. And it turns into a discussion of the politics of the time. Her brother, Edmund Randolph, is on the side of the patriots. He’s thinking of joining General Washington as an aide-de-camp…

Lloyd: And in fact, did…

Melanie: Yes, indeed he does, eventually, and of course her father is the Attorney General who is appointed by the king and he has remained loyal to the crown. That’s where he believes his loyalty lies, should lie, and it does lie there.
And so she’s torn: what does her father say? And her brother says this. And her uncle, Peyton Randolph, who’s the Speaker of the House, he’s also – he’s more moderate, but he’s also on the side more of the patriots. And so there’s been this division in her family that she witnesses. And now her brother is telling her that, “Well, if things continue, you know, Father’s going to leave the colony and you’re going to go with him.”

And that’s really where the heart of it is. It comes out at the end and that’s really what’s bothering her. This thought that she might have to leave her home, the only home she’s ever known, and move to London. And her brother’s not going with her - he’s going to stay there; who knows if she’ll ever see him again? All of her family is in Virginia. And she has to leave.

Lloyd: And I wonder if, well, I guess people would have to learn with you and your mother shouting in the street!

Melanie: (Laughs.) They don’t have a choice!

Lloyd: I’m still… you said you moved to Williamsburg - from where?

Melanie: I had currently been in central New York, doing children’s theater, touring with a theater company.

Lloyd: …at the Common Glory in Lake Matoaka Amphitheatre. So I’ve always been sort of attracted to this place because it’s fun to dress up and play somebody when you worked. Do you have fun every day, or is it that sometimes you just wish it would go away and leave you alone?

Melanie: (Laughs.) I’m sure everybody feels that way about their job one day but, I think overall the majority, I enjoy my job. And if I don’t enjoy it all day long, there’s at least one spark within each and every day that I’m here. Even if I’m grumpy to start in the morning. Who isn’t to get up and go to work?

Lloyd: Everybody’s grumpy in the morning or I don’t trust ‘em.

Lloyd: Is there any one moment that’s occurred to you that you were just stunned by it. Has somebody said something, or thrown a rock (nobody’s thrown a rock) but just asked a question that just took you right away?

Melanie: Well, I have been a little stunned that there are actually a number of adults who don’t know that the Revolutionary War was before the Civil War. That was really stunning - when somebody asked me that for the very first time – an adult – I didn’t know how to answer and stay in character because, well, technically…

Melanie: The Revolutionary War is acivil war; we’re fighting against Great Britain, our mother country - but I didn’t want to go into that because I felt that might just confuse them more. And you just - your brain is thinking, “How do I answer this and make them look good in front of their kids?” But there have been some very clever actor-interpreters that I have witnessed talk their way around any question at all…and I am getting better. I am improving by observing my co-workers.

Lloyd: How could you talk your way around that question?

Melanie: At that time, you can’t. You have to kind of take yourself out into a third person and just explain that the Revolutionary War came first and that’s when we formed our country and then the Civil War was between the states. Right now we’re still colonies… It is shocking.

Melanie: That’s what I thought, too, but, you learn something new every day. And, I guess, at least they asked. At least they learned. That- if you think of the bright side, I mean, it’s kind of sad that they didn’t know, but they asked the question and now they know.

Lloyd: I suppose that’s worthwhile, but it does speak to a level of a lack of historical background that I didn’t know existed.

Melanie: I didn’t know it existed either. But hopefully, I mean the Revolutionary City and all of the work in all of Colonial Williamsburg helps that issue: that if they didn’t learn it in school, at least they’re learning it here. Better late than never, I would say.