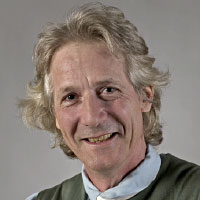 Mack Headley talks about the sophisticated artistry of 18th-century cabinetmaking.

Lloyd Dobyns: Hi! Welcome to Colonial Williamsburg: Past & Present on history.org. This is “Behind the Scenes” where you meet the people who work here. That’s my job. I’m Lloyd Dobyns, and mostly I ask questions. This time, I’m asking Mack Headley, and at Colonial Williamsburg’s Historic Area, he’s the master cabinetmaker. Which leads to the first question. What is the master cabinetmaker?

Lloyd: Where did you learn to do that? That’s not a normal skill.

Mack: Well, a tremendous amount here working with original objects in the museum, but I started out in a family shop. My father and grandfather and great-grandfather were cabinetmakers. We didn’t work totally by hand, but the small custom shop did do a lot of specialty handwork. That’s prepared me somewhat for the job.

Mack: Not too many of us, although my son is coming along.

Lloyd: Oh, really? See, all sorts of things that I didn’t know. Where is he in college?

Mack: He’s about to begin at the Winterthur program.

Lloyd: How long have you been here?

Mack: On and off since the mid 1970s. I came in spring of ‘76, worked here for about three years, worked for myself for about five, and I’ve been back here since ’84.

Mack: Well, at that point in time the [Colonial Williamsburg] curator of furniture was traveling up through the northern Shenandoah Valley, where I’m from, and was lecturing about 18th-century furniture made in that area. At the end of the presentation, in talking to him, he mentioned that Williamsburg was looking for a cabinetmaker. It was just too tempting not to come and see what the job was all about.

Lloyd: Did you have an interest in the 18th century?

Mack: Most of the work in the family business was antique dealers, restoration, and reproductions largely of antique designs. In the old business, so that is something that I had already kind of been involved in.

Lloyd: I’m fairly good at woodworking and my father was even better. But I’m certainly not a cabinetmaker. That requires a degree of skill that I am never going to see. So you learned everything on the job, actually, from the family business to here.

Mack: Yes, I think that’s reasonable. The only way to learn it is hands-on. The original objects that we have in the museum are just tremendous and very unself-conscious examples of what professional work was like at a time when professionals were pretty accomplished. The middle of the 18th century is about as sophisticated artistically and structurally, from an engineering perspective, it’s about as thoughtful as furniture gets.

Lloyd: Were consumers demanding then?

Mack: Yes, I think very much so.

Lloyd: I’ve often wondered, looking at pieces, why people put so much of themselves into a piece of furniture. It could be: one, they were proud of their ability, and two, the customer didn’t want it if they didn’t. So it was a double-edged sword there?

Mack: Yes, I think the training of the 18th-century customer, or the folks who really set the standards at that time, is very thoughtful. I guess Jefferson is a great example of someone who put a great deal of thought into architectural design and that’s the foundation of furniture design as well, so we have very well-educated customers.

Lloyd: Architecture and furniture. I had not thought of that; I hadn’t connected the two. But they do connect, don’t they?

Mack: Very strongly, yes. Thomas Chippendale mentioned at the beginning of his design book, the first furniture design book published in England, that drawing in perspective and architectural design are the real soul and basis of your art as a cabinetmaker.

Lloyd: Okay, can you draw?

Mack: I work at it. I think a good many of the treatises that do suggest training and skill development in the 18th century suggest drawing as a very, very important exercise.

Lloyd: You mentioned that you were also a supervisor and that you had a shop. How many people work in the shop, not including you?

Mack: There are six in the shop at this point. Four of them are cabinetmakers, two apprentices, two journeymen, and then two harpsichord makers. The 18th-century shop we’re representing advertised cabinetmaking certainly, but as a very unusual addition, they also said they could make and repair spinets and harpsichords. We’re really in some ways representing a couple professions.

Mack: Well, those fellows handle their side of the business and they don’t do any cabinetmaking andâ€¦

Lloyd: â€¦and you don’t do any music instrument making.

Mack: It’s two very different kinds of woodworking. Both are very sophisticated, but both quite different.

Lloyd: Okay,I’m going to change tack a little bit. What do people whovisit you want to know about? Today’s visitor who walks into the shop and says, “Mr. Master Cabinetmaker . . .” and asks a question.

Mack: I guess most folks, as they come in and try to settle in and understand really what they are seeing, is this a presentation or is this a real operation? Are we really doing what we pretend to be? Are the things that we’re presenting on the floor old or new? They just try to find out, “What is this place all about?”

Lloyd: Okay, I’ll ask the same question. Is it old or new, and what is this place all about?

Mack: Well, I guess that’s the introduction when folks come in. That’s our job to kind of say we’ve made all of these things in the next room with our hand tools. We have a two-part shop. We have a presentation room, an addition which looks like it was added to the 18th-century business as a show room or a display room. It’s where the 18th-century cabinetmaker might have marketed some ready-made things. We just present our objects as things we have produced, most of them copied off of specific Virginia antiques and they’re welcome to open a drawer and look things over. They won’t let you touch antiques in the buildings, but our things are representative of them and we try to introduce them [guests] to 18th-century style and construction.

Mack: Well,we’re a reconstruction on the site of a business that was busy from the early 1750s up until the Revolution. And it looks to have fallen down sometime late 1770s, early 1780s. The last master cabinetmaker there joins the Revolutionary Army and doesn’t return from the war. The capitol moves to Richmond and just a number of factorsâ€¦the cabinetmaking ends at that point for that specific shop.

Lloyd: You were a victim, or he was a victim of Murphy’s Law&ndashwhatever could go wrong, did.

Lloyd: He didn’t even come back. That was a bad ending for him, almost certainly. Other than asking if it’s real, or if you do it, does anybody ever want to see you, hands- on, making something?

Mack: Well, that’s part of our job and with this two-room shop, passing through the wareroom or showroom into the workshop, hopefully when staffing allows, we have people who are working. It will usually be one person who will be fielding questions and searching for interests of people and hopefully occupying the visitor’s attention while other people do have real projects they are making progress on. At present, we are just winding up a set of a half a dozen chairs of one pattern, unusual chair, we were preparing for a woodworking symposium we give in the winter as a demonstration piece. We’re cleaning up the final work on a bed copied from one that looked to have been Martha Washington’s bed. It’s in the Smithsonian now. And then there’s always a harpsichord in progress.

Lloyd: (Chuckles) You finish up the chairs, you finish up Martha Washington’s bedâ€¦what happens to them? I mean, you can’t just make these and throw them out.

Mack: For many years, a concerted effort by the museum over at least the last couple of decades, has been to refurnish the exhibition buildings as accurately to 18th-century inventories as was possible and also get good Virginia design into high-traffic areas where antiques just wouldn’t survive and are irreplaceable. We’ve been making pieces that have gone into exhibitions for really quite a long time. Now Collections has pretty much gotten things the way they think they should be. They aren’t asking a great deal from us. We continue to choose projects to train apprentices or develop journeymen skills or study specific 18th-century cabinetmakers. So far, the things we’ve done have sold when turned over to our Products people. Prentis Store is covering sales of objects from the Trades Shops and our things are included. We pass them along.

Lloyd: Once you’ve done the Collections thing and everyone’s pretty much happy, you actually are a cabinetmaking shop, retail. You make furniture. That’s what you do.

Lloyd: So when people come in and say what are you doing, you say I’m making furniture and trying to make a profit if I can.

Mack: Well, making a profit is not very likely, under our circumstances. The 18th-century workers are working with a real sense of urgency and that’s a very important part of the character of 18th-century work. If we pressured our workmen to the point where the visitors were an intrusion or cutting into our profits, I don’t think we’d be handling that side of our job as we should. I think the craftsmen’s level of efficiency needs to be a point of personal pride rather than economic reward for our circumstance.