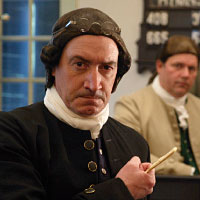 Patrick Henry’s passion for his beliefs comes alive in Richard Schumann’s interpretation of the patriot’s thoughts on the importance of religious faith in daily life.

Lloyd Dobyns: Hi. Welcome to Colonial Williamsburg: Past and Present in July on history.org. I’m Lloyd Dobyns, and on these programs I normally ask a lot of questions. Not this week â€“ when we are thinking about independence and what it took to achieve that independence in the 18th century. Religion played a major role, much more of one than people today remember or even consider. There was, in those days, quite a healthy debate about the separation between church and state. Thomas Jefferson and Patrick Henry both introduced bills about religion in the Virginia General Assembly, and, as you might suspect, the bills were quite different. Patrick Henry is interpreted for Colonial Williamsburg by Richard Schumann, who this week, in character, supports the bill that Henry introduced.