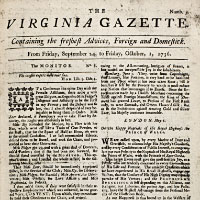 Dennis Watson speculates on the loyalties of the publisher of The Virginia Gazette in the years leading up to the Revolution.

Lloyd Dobyns: Hi! Welcome to Colonial Williamsburg: Past & Present on history.org. This is “Behind the Scenes” where you will meet the people who work here. That’s my job. I’m Lloyd Dobyns, and mostly I ask questions. This time, I’m asking Dennis Watson who at Williamsburg is Alex Purdie, the publisher of The Virginia Gazette. So, what did a publisher do in those days?

Dennis Watson: The publisher â€“ he or she â€“ and let us not forget we have a few women printers here in North America also. They are responsible for gathering the news when putting out a paper, which, by the way, is weekly not like London, tri-weekly, bi-weekly, some by the day, etc. The newspapers here are put out by the week. There are three here at this present time in Virginia, and each is ready on a different day of the week. So, primarily, gathering the news, gathering the intelligence from among their various sources, to use the modern vernacular â€“ they have a great web. And they gatherâ€¦ only sold by the handâ€¦London, Bristol, Edinburgh, Philadelphia, New York, Charleston, their contacts at that time are the people [upon whom] they depend to send them packets of information, which in great part, I may add, are reprinted articles.

Lloyd: Are they generally accurate?

Dennis: They are generally accurate â€“ depending on the printer, of course, depending on the publication. Just like today, like yesterday, historians went to work looking into the past. What made that printer tick? I mean I can look to Boston printers at the time, and not realize perhaps, as I do today, that The Boston Gazette and Country Journal, for example â€“ which I reprinted articles from that and other newspapers in my paper â€“ was owned by Benjamin Eddies and John Gill. Two men who were ardent supporters of what will be the revolutionary cause, and who were good friends, indeed, of a man by the name of Adams. These fellows wrote so much propaganda, it would boggle the mind, literally. Indeed, when the issue was debated in Parliament over how to address the whole tea business in Boston, someone rose to say, “perhaps we should look to quieting the Boston printing presses, for much of what is printed there is reprinted elsewhere in North America, and so the scandalous word is spread around and inflaming the minds and passions of many of the people.” Not off hand, I don’t remember the name, but there was a gentleman who arose in that debate who said “if we are to address the closing of the printing presses in North America, we must first address the closing of the printing presses in London, for they print in far more inflammatory fashion.”

Dennis: Soâ€¦Purdie is reprinting. He is also printing, if you will, editorials, opinions from people around Virginia â€“ political and social. That, he tries to keep it I thinkâ€¦when I look at Purdie’s paper â€“ and I have looked at it over the years â€“ I try to do justice to the man, not only in his partnership with John Dixon, as he was, for a considerable time, but when he broke out on his own, if you will, at the end of ’74 and the first quarter of ’75, he becomes the public printer. He is now running the press; he has his own business â€“ the ultimate dream of any man â€“ to have your own business. And, with that, I dare say, came the balance of news. How do you lay out the first column, the second, the third, and the fourth column of each page? The paper consisted of four pages, the fourth page being the most lucrative â€“ advertising. And just like today, sometimes the advertising would creep into the third page, or even into the second page. It is interesting to note how perhaps some people, when they picked up the weekly newspaper, said “My God, this is two pages of news and two pages of advertising.”Advertising back then was even just as important â€“ property for sale, runaway slaves, etc., etc., etc., so it was an important thing. Were people displeased, perhaps on occasion, of how he laid out his paper? Yes, he would print, if you will, an occasional opinion that might challenge the content of his paper of late. And, he would print it verbatim: “Mr. Purdie,” or “to the printer, as you have been so good to print so much of this over these past weeks, perhaps you will print an opposing viewâ€¦,” which he put the whole thing to the paperâ€¦which in a sense is not just the view, but it is telling you that here is a writer who doesn’t quite like all of what I have been printing of late. Does he write some articles by himself? What I have seen are few. Occasionally he would put an opinion to a specific article, but making his own mark, letting you know “these are my words, this is what I support, or what I think of this particular articleâ€¦”

Lloyd: So, he tried to separate news and opinion?

Dennis: I believe he did. I believe that each printer back then felt themselves that they had an obligation to run their paper, if you will, to set it up, to put it out and in the fashion that they thought was proper. Now where are you? Are you in New York? Are you in Boston? Are you in Virginia? I mean, who are your subscribers? What is the politics, what is the sentiment of the general public? There has to be an influence, perhaps, to some extent on how you are laying out your paper and that of your competitors.

Lloyd: Where did he stand on the Revolution?

Dennis: Ah...interestingâ€¦Purdie, of course, is a man who grew up in Scotland, received a basic education, apprenticed thereâ€¦and eventually came here to Virginia as a journeyman printer. To answer that question, I will say this, he goes from journeyman, to foreman, to part- owner of a business, to owning his own business; he is married twice, the second time because his first wife had passed on through an illness. She left him with three living sons. And, he owned a house just down from the Capitol, so he is living on the main street. He now owned what today is Tarpley’s Store. That was his. He bought that out. And that was where he operated his business from, his shop and his printing business.Now, all that he had, I believe, was here, naturally. His fortune, if you want to call it that, everything he had earned through hard work, and so on and so forth, was here. As the Revolution comes, on the eve of the Revolution, I think Purdie was a man who could reflect on his own history. Perhaps he had a distrust of Parliament and government. Perhaps he was aware, indeed, of his own Scottish history and how the Scots were treated. But regardless, he leans towards the sympathetic and popular opinion, which is, support the Revolution. Defend our rights and liberties. And if you look at his own newspaper that he prints in the year of 1775 through 1776, on the mast head, the top of the first page, his coat of arms, that which he puts there changes three times â€“ three times. And when you read it, it makes a statement as to how he feels about the Revolution. On the first one, of course, it is just “â€¦the public good, and for the liberty of allâ€¦” and so on and so forth; it’s pretty standard. But the second one, he puts two interconnecting boxes with the words “Thirteen United Colonies,” and around the edge of the box “United we stand; divided we fall.” That is the masthead of his newspaper. And he changes it one more time in ’76 to another coat of arms with a circle in the center with a coiled snake that says, “Don’t tread on me.” So we know where he leans; we know where he is going.

Lloyd: How did it turn out for him?

Dennis: Purdie will die, as all men do. But, you know, it’s unfortunate. He died in the year 1779 from an illness. We know from correspondence in two years leading up to that he was writing to the provisional government up there in Richmond; he was communicating with them, he was still printing as other papers were, on behalf of Virginia’s provisional government and then for the new government when we declare independence. So, he is communicating back and forth. His press is still here. His three sons will all eventually die. One died in a prison ship â€“ on one of those rotten prison hulks that the British maintained in New York. Another one died under the command of General Wayne in the Battle of Falling Timbers, where a handful of men were killed by the Indians, his son being one. And then the other son died of an illness, so all his sons die. His wife will outlive him. His nephew takes up the paper. And, it is interesting; it is pretty sad, really. It is pretty sad.

Dennis: He never saw the end. And, I think it would have been, I think it is with great fascination that had he been around still printing, through all of ’79, himself, and ’80 and ’81, think of how he would have reacted, perhaps, when the British army marched into Williamsburg.

Lloyd: He would not have been a popular man.

Dennis: Well, it is interesting, some of those who I like to think had concealed themselves rather well during the Revolution, and that is, we now know that not all persons were for it. People were secretly hoping the British army would come in and crush the Congress, crush Washington, and put everything back the way it was, the way they liked it before. It never could go back the way it was before â€“ never. But they came out and showed their true colors. Of course, it didn’t help them any when Washington’s army came in behind...(laughs)

Lloyd: (Laughs heartily)Dennis: They had shown themselves as what they were, but that’s a great fascination â€“ Williamsburg occupied by the British army; Williamsburg occupied by the Continental army, and going out to the battlefields at Yorktown. What a sight it must have been. How Purdie would have reported the Battle of Yorktown. That’s what I would like to have seen.

Lloyd: That would be fascinating.

Dennis: And by the way, he was, during this timeâ€¦if you were to say, what is the content of Purdie’s paper during this time of ’75, ’76, it is mostly political. It is mostly reporting on the war â€“ this skirmish, this battle, and so on and so forth. That’s a lot of what’s in Purdie’s paper. Oh, there are opinions coming in out of London and elsewhere, but the content of the paper shifts dramatically, and it focuses on the issues of politics and the war as it relates to America and to England.