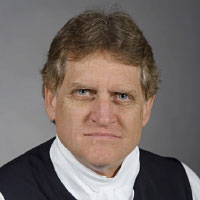 Bill Weldon believes portraying events on the same ground where they took place 230 years ago allows guests to experience history in a unique way.

Lloyd Dobyns: It’s May, and we’re celebrating our first full year of podcasting on history.org. We’re pleased that you listen, and we appreciate your email. We’re still doing what you seem to enjoy on Colonial Williamsburg: Past & Present, letting you meet “Behind the Scenes” the people who work here. That’s my job. I’m Lloyd Dobyns, and mostly I ask questions. This time, I’m asking Bill Weldon, who is the director for The Revolutionary City in Colonial Williamsburg’s Historic Area, and I guess the first question is, what is the Revolutionary City?

Bill Weldon: Well, Lloyd, the Revolutionary City is a new approach to programming that we’re undertaking this year with the idea of really trying to represent history as theater and concentrate our living history program in the afternoons for a two-and-a-half hour period to really reveal Williamsburg’s role in the American Revolution and the War for Independence, using actors to portray historical figures that we know were players in Williamsburg’s revolutionary story.

Lloyd: Yeah, the history in Williamsburg is not exactly unknown, so you know who was here and when they were here.

Lloyd: So you do this in the afternoon?

Bill: Yes, the program runs from 2:30 to 5:00 o’clock everyday. We actuallyclose off the east end of the Historic Area from Botetourt Street up past the Capitol so that we can use that entire environment for the actors to live out these scenes that represent Williamsburg in the Revolution.

Lloyd: Back in my youth, which was a long time ago, I’ve done a little acting â€“ outdoor acting actors hate because you can’t be heard.

Lloyd: Have you got that solved somehow?

Bill: We’re certainly working on solving it. We’ve determined for the major scenes and the big events that we’re going to represent we’re actually amplifying the actors; we’re using microphones because of that very reason. We want to be able to reach an audience of a size up to as many as 2,000 people for these big scenes. Amplification is the only way we’re going to accomplish that.

Lloyd: In the old days, I’m talking about revolutionary days, from some of the people I’ve interviewed,they were talking about people who could be heard by 5,000 or 6,000 people, open air, just speaking. That secret has been lost a long time ago.

Bill: Evidently. Yes, we know people like the renowned preacher George Whitefield supposedly on one occasion preached to a crowd of people in Philadelphia numbering over 30,000 people â€“ un-amplified, of course. We find with all the varying conditions that we have to deal with outdoors, for quality sake, it’s just safer and more effective to amplify the actors.

Lloyd: It just occurred to me, why do you want to be outdoors? Couldn’t you do it a theater?

Bill: Well, in our situation, we want to be able to attract an audience up to as many as 2,000 people. We just don’t have that kind of indoor venue, and perhaps more importantly, we want people to be on the ground where these things actually happened. That’s our principle motivation, I think, in staging it in the Historic Area. The Capitol building, for instance, is a reconstructed building, but it’s on the very same ground where things like the Virginia Declaration of Rights, the Virginia Constitution, were actually constructed. We feel like there’s a lot of value to having people in those environments actually experiencing things where they happened.

Lloyd: Who do you hope to attract?

Bill: Everybody and anybody. One of the principle aims for the Revolutionary City is to bring folks to Williamsburg who maybe have never considered themselves interested in history before. Perhaps the appeal of living history, of having people actually portray the historical characters, will provoke them to want come see what this is all about.

Lloyd: So here come these people. You’ve got them in the Historic Area, one end of it, and you’ve got historic characters that are doing things. Are you trying to involve them?

Bill: Absolutely. That’s one of the principle aims of this whole undertaking is not just that they watch a theatrical production, but they actually project themselves into these historical events and stories. One of the things that we’ve concerned ourselves most with in the training of the actors is how to actively engage and involve people into the stories. We want them to feel like they’re participants in this. As a matter of fact, in the opening scenes each day, we indicate to them that for the next two hours, we want you to think of yourselves as citizens in Virginia, in the 1770s and ’80s. Come and experience with us what it was like to live through these times in Williamsburg.

Lloyd: Well, you alwayshave interpreters here, so they are probably more likely to interact with people than regular actors would.

Bill: We very deliberately named the position that the actors now occupy “actor interpreters” for the purpose of communicating that they’re not just actors in the sense of stage performance, where they speak lines and people listen, but they’re also interpreters in the regard that part of their job is to relate these things both to people and have them engage back in the history that we’re betraying.

Lloyd: I think that would probably take more courage than I’ve got.

Lloyd: I don’t mind acting where I can say lines and I can stop. But if you have to engage peopleâ€¦how do you go about that?

Bill: I think it’s a matter first of having the sensibility of enjoying conversationâ€¦of not necessarily the need to be extroverted, but the desire and the willingness to go up to total strangers and begin to talk to them about something they may or may not have any knowledge of. And it takes a lot of gumption. It takes a lot of nerve, even, to do that. And it’s not something that has come naturally to some of the actors that we’ve brought in to do these things.

Lloyd: (Laughs) It wouldn’t come naturally to me, I promise. I suppose that being in costume gives you a certain amount of amour; you obviously are not of this period.

Bill: Well, I’ll confess to you that in my everyday roleas a manager and program developer, I’m not inclined to do that kind of thing. As Bill Weldon, I’m not inclined to walk up to total strangers and presume I can engage them in a conversation about something. But it does serve as amour. I think that’s a good analogy. When I step into costume and step into another persona, I do feel empowered to do that very thing. I think that perhaps the costume is a protection in that regard.

Lloyd: Do you pick people out that you want to talk to?

Bill: I do. I think that a lot of the actors develop a sense of who wants to play the game and who may not want to.I think with experience, you can read people’s eyes, and you can read their body language, and you can determine they’re very interested in playing with me in this scene. Other people will indicate to you that no, I’m much more comfortable just to watch, thank you. So you do have to be sensitive to that.

Lloyd: How about kids. Do you try to involve kids?

Bill: Absolutely. Wedid the scene yesterday, and I walked up to a group of school kids that I discovered after the fact were third graders, asked them where they had come from, asked them if they had enjoyed hearing Patrick Henry’s speech, asked them to repeat some of it for me. They got a tremendous kick out of that â€“ engaging kids is always rewarding if you give them the opportunity to play, because that’s what kids like to do.

Lloyd: When you said some people will indicate they want to play, I said that’s every kid I’ve ever known.

Bill: Yeah, exactly, especially smaller kids. We’ve also found that kids of the age of eight to12 years old are particularly keen on reacting to the historical aspects of the program.

Lloyd: I hate to say this because it’s almost a kiss of death, but in a way this is an educational effort.

Lloyd: That you’re masquerading as theaterâ€¦.

Lloyd: If somebody said “school,” no one would come, right?

Bill: No. As a matter of fact, one comment that we hear fairly regularly, those of us who portray characters or take part in the living history program is, gee, I wish they had taught me history this way in school. That’s one of the most rewarding and gratifying things that we hear.

Bill: Well, traditionally, the history class has been the teacher standing up and lecturing about a particular event or time period. But what we’re finding more and more are teachers who let the kids role-play particular historical events. As a matter of fact, we operate what we refer to as a Teachers Institute, where we spend a lot of time working with teachers on engagement techniques and living history techniques that they can actually employ in their classrooms. I believe there’s sort of a shift in the way teachers and school systems are portraying history.

Lloyd: That would be a good thing.

Lloyd: You said that you wanted to attract crowds up to 2,000. I don’t know if you know this off of the top of your head, but how many roles do you have?

Bill: We have 40 actor/interpreters who each work five days a week. The programming occurs over the full seven days of each week. That requires that each actor be prepared and play two â€“ and in some cases three â€“ different roles so that we have each of the roles covered each day of the program. We have another dozen people who are principally involved in the production of the program each day. Sound technicians, props people, stage managers â€“ those folks have to be on the scene every afternoon to make the show go, just as the case of any theatrical production.

Lloyd: It’s going to be fun to come back a year from now and see how you feel about it after you’ve been doing it for a year.

Bill: I’ll be fascinated to see myself how I feel about it after a year. One of the things that we’ve been aware of from the beginning of the planning of the Revolutionary City is that it’s going to have to grow and change. If you come back next year and you don’t see changes in the program, then we will not have followed through on that really critical part of the job.