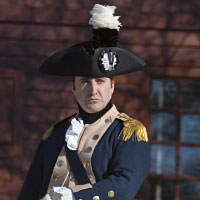 Lloyd Dobyns: Hi! Welcome to Colonial Williamsburg: Past & Present on history.org.  This is “Behind the Scenes,” where you meet the people who work here. That’s my job. I’m Lloyd Dobyns and mostly I ask questions. This time, I’m asking Mark Schneider, who is an actor-interpreter in Colonial Williamsburg’s Historic Area and is involved with Revolutionary City â€“ how?

Mark Schneider:  Well, as with my 35 co-workers in the actor-interpreter department, we are going to portray a variety of characters from 1774 to 1783, who were here in Williamsburg at some time during the American Revolution. So, I will be portraying the Marquis de Lafayette on day two â€“ it will be a two-day cycle for the Revolutionary City â€“ but I will also be portraying a Virginian, known as Mann Paige â€“ many have known him as the Paul Revere of Virginia, because he did make a great ride of 100 miles from Fredericksburg to Williamsburg in 1775, and a third character I will be portraying is   Benedict Arnold, who I think we all know who he was.

Lloyd: I can’t imagine somebody portraying Lafayette and Benedict Arnold in the same breath.

Mark: Yes, it requires me to be a bit of a schizophrenicâ€¦(laughs)

Lloyd: Because of some research I am doing I know a little bit, a little bit about Lafayette, and I am amazed at how young he actually was when he got here and began to do things for the Revolution.

Mark: Yes, he was in fact 19 when he arrived here in America. In France, he first heard of this American Revolution in 1775 over a dinner in the summer with some of the officers in his regiment that he was serving in. He embraced it immediately. In fact, following that dinner, he said to his host â€“ the Duc de Broglie â€“ that he would like to put his colors to this cause of independence for America. But like any other aristocrat, they wanted to get a name for themselves. His father had been killed by the English when Lafayette was about two years old, and he wanted revenge.  So, he was not permitted to leave France. The king did not give permission for his young aristocrats, his young officers, to leave France because France was not at war at that time with England. But Lafayette was determined to leave France and serve this cause. So, he purchased a ship fittingly called “La Victoire,” the Victory. And, instead of sailing from France, because the king said that whoever would help these young officers leave France would be imprisoned immediately, he sailed from the northern part of Spain. And there after seven weeks, with quite a bit of seasickness, he arrived â€“ not in Philadelphia where the Congress was â€“ but rather in Georgetown, South Carolina. Georgetown, S.C. is certainly quite far from Philadelphia, but the reason they couldn’t go directly to Philadelphia was because of course the English fleet was patrolling all off the coast and dominating the seas. There arriving he stayed in Charleston for some time and then made his way northwards towards Philadelphia â€“ no easy task; the roads were not very good, he even talks about traveling through swamps, and, finally presenting himself before the Congress in the hope that he might be given a command. Well, sadly, because so many French aristocrats were coming to Congress and asking for high position, they told him to go away, and come back the next day, him and his party he had brought with him. The next day again they present themselves, and they [Congress] say “well, we have nothing to give you. I’m sorry, you’re going to have to go back to France.” Well he is determined. So, finally when he says he’ll serve as a volunteer, and he’ll serve at his own expense, they give him the rank of major general in the army.

Lloyd:  That sounds right â€“ a rank and no pay.

Mark:  A rank and no pay, and no real position, just a major general.

Lloyd: According to what I read, which may or may not be correct, as soon as he met George Washington, they seemed to hit it off, and he became a staff officer for Washington.

Mark: Yes, directly after he obtains that commission July 31, 1777, he meets Washington, so August 1, 1777, there is a ball, really a dinner being held for Washington to honor him for defending the City of Brotherly Love, and that’s where he is introduced to Washington. And, Lafayette said before he even spoke with him, he knew who he was by the majesty of his face, by the way he carried himself. He [Lafayette] knew he [Washington] was a great man in his presence. And, they were introduced, and they embraced, and it was then that they became good friends. They immediately liked one another, and yes, he would be put on the staff of Washington.

Lloyd: Washington later told â€“ after Lafayette had been wounded â€“ Washington told the surgeon to “treat him like my son.”

Mark: Yes, not just as my friend, but as my son. For at Brandywine, Lafayette again, holding no real position, but just trying to rally the American troops that were beginning to retreat, rode forward and received a musket ball in his leg, and fell from his horse unconscious, and that’s when Washington told them to send his personal surgeon.

Lloyd: I am unable to talk about Lafayette without remembering his description by contemporaries. He was not what you would call a rake. He was kind of chubby maybe and youthfulâ€¦

Mark:  Very youthful, but as opposed to being chubby, they called him very tall and very slender with reddish hair.

Mark: He was an excellent horsemen, he excelled when he was at school in France the collÃ¨ge du Plessis as well as l’acadÃ©mie de Versailles, both schools where he learned his trade, but he was so enthusiastic for this cause, as if he was chomping at the bit wanting to do something more.

Lloyd: I read somewhereâ€¦don’t know if this is true eitherâ€¦

Lloyd: Before he left France to come to the colonies, he went to some sort of dance somewhere and the Queen of France all but fell down laughing at him.

Mark: Yes, he was not known to be the greatest of dancers, and once again, we must remember that he is not a seasoned aristocrat but a very young aristocrat, so if this particular event took place, it would have to be before his 19th birthday because that is when he is in the United States. And Marie Antoinette was the height of fashion, she was the height of culture in Paris, certainly, so if it’s not done to her standards, she probably laughed at quite a few.

Lloyd: I had not put that together in my mind, but Lafayette and Marie Antoinette would not have been a pair.

Mark: I think not, I think he was quite content with his wife when he married at 16 to Adrienne de Noailles. She was part of one of the most important and wealthiest families in France.

Lloyd: Well, her dowry helped him â€“ although he was wealthy in his own right â€“ it certainly took care of any problem with meals he was going to have.

Mark: Mot certainly, he became one of the richest men in France as a result of that marriage.

Mark: Well, as Lafayette â€“ and we are still working out all of the details â€“ we are going to recreate in Williamsburg several parts of his life.  July of 1781, Lafayette arrived with his light division here in Williamsburg after the Battle of Greensprings, which is located very close to where Jamestown is, and nursed his division back to health as they continued the campaign against Lord Cornwallis here in Virginia. We are going to reenact that for a portion of it, but we are also going to reenact September 1781. It was a grand time here in Williamsburg, because it was the arrival of not only Lafayette’s men, but General Washington’s Continental Army as well as that of the Compte de Rochambeau and the French Army as they prepared to encircle Cornwallis at Yorktown, so day two, the focus will be on that 1781 campaign.

Lloyd: I read somewhere that after the siege of Yorktown, Cornwallis wanted to meet Lafayette because Lafayette had hounded him pretty much all across Virginia. And Cornwallis wanted to show Lafayette how he was going to cross the [York] river and escape to the north on the Gloucester side on the peninsula, and Lafayette smiled at him and used the same map to show him where he had put his men to block his escape. That’s got to be a classic.

Mark: (Laughs) It’s quite interesting and whether Lafayette was the most instrumental person, rather general, in placing those soldiers there, we don’t quite know; it could have been Rochambeau and Washington, andâ€¦

Lloyd: â€¦the fact that he could point and say “here’s where my men were, so you couldn’t do thatâ€¦” That is great fun. That’s an interesting period for Lafayette. He would come back twice?

Mark:  Yes, he comes back in 1784. Of course the American Revolution is over. And he comes for four months, and he spends two weeks of that tour with Washington at Mount Vernon. It’s a grand time â€“ very exciting. The Americans have just won their independence, and it’s a time to perhaps relax for a moment, and reflect upon the war. He travels from Boston all the way to Richmond â€“ not quite as extensive as his grand tour which takes over a year in 1824 to ’25 which he takes with his son, who is fittingly named George Washington Lafayette.

Lloyd: Didn’t know that. There is a story of Lafayette benefiting from a slave who was a spy who apparently fed Lafayette as much information as he could from Cornwallis’ headquarters.

Lloyd: The James Bond of his day.

Mark: Yes, the James Bond of his day (laughs).

Lloyd: So, that will get us all the way through the victory at Yorktown.