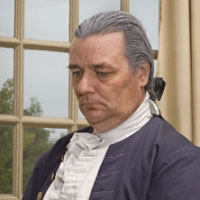 Ron Carnegie: George Whitefield was one of the instigators and main players in the Reawakening here in the early days of the United States, or pre-United States, in the colonial period. He was an evangelical preacher of the Methodist bentâ€¦ in fact he’s one of the founders of the Methodist religion, though at the time it was not a separate religion from the established church, the Anglican faith.

Lloyd: I always thought â€“ until I was checking into the background of Whitefield â€“ that the Wesley brothers were solely responsible â€“ turns out, not so.

Ron: Exactly. The Wesleys and Whitefield have a strong difference of opinion starting in [17]38 which in the end leaves Whitefield remembered less than he probably should be, particularly since Whitefield is the man who got the Wesleys out of churches and got them doing itinerant preaching â€“ which helped spread the word of the Methodist beliefs and spread the evangelistic cause as well. Originally the Wesleys would not preach out of doors, which Whitefield was forced to [do] by his popularity at a very early period in his career.

Lloyd: This is a question that nobody may be able to answer. Why was he so instantly popular?

Ron: I’m one of those nobodies, I think. (Laughs.) I’ll tell you one thing I believe affected him is that in his youth he studied theatre. Later he is going to really condemn that period, in fact he condemns the theatre itself, but when he was growing up he was growing up in a tavern, he was surrounded by some actors, he was pursuing the studying of that, and I think that affects in some ways the way that he preaches, but I don’t want to put a dim light on his passion for the cause as well, which is part of what’s driving him. He’s not â€“ well some of his opponents claim that he is â€“ but he is not a false preacher. He is not just putting on a show, but I do believe that his understanding of how to work a crowd is being used by him, just the way he uses his understanding of print in the days to increase his popularity. He is riding the wave of the consumer revolution â€“ which is going on right in that period â€“ to help promote himself and get his word further noticed, which is part of the reason for his success later. But from his very first time preaching there are references to young ladies pulling at their hair and crying and passing out. The references you read in the period to the way he’s affecting the crowd is very similar to what we might have thought of in the fifties or the sixties of pop musicians and the way that crowds were responding to them.

Ron: Not one I think most people would make, but it’s definitely the way these strike me when I read them. There’s people screaming and fainting just like when the Beatles first arrived here in the sixties, which is not something you would expect from a preacher at all.

Lloyd: One of the things I read said he had a beautiful and very projected voice. He could make it go for a mile.

Ron: And incredible control of his voice, there is a reference â€“ I can’t remember now who says it â€“ but they refer to how he can get a whole lot of meaning and passion just into the sound of “oh.” So, he has a great control of his voice; he has a very loud voice apparently. There are references to him being heard by surprisingly large numbers â€“ some accounts claim up to 30,000.

Lloyd: The one I liked doesn’t say any number for the crowd but says he converted a man standing a mile away.

Ron: Very good talking. The most I’ve ever spoken to without amplification was probably somewhere between one and two thousand. The idea of addressing a crowd of 30,000 people without any sort of modern amplification is just amazing, just amazing.

Lloyd: I don’t think I’d even try it.

Lloyd: It would be hopeless.

Ron: Well and that’s the other accounts. I mention that some of the people who spoke against him talk about well, like you might imagine with a modern evangelist there’s often people claiming he is just after money â€“ in fact somebody referred to him as “Reverend Money Trap” â€“ that he was false and just after the popularity, or just trying to fleece the flock, but the accounts of his tours, and he toured here in the United States on seven different occasionsâ€¦he’s often making several sermons in a day, and he’s often forced toâ€¦well he’s physically injuring himself in this process; he’s coughing up blood; he’s really injuring himself. I don’t think anyone is going to be doing that just for a little profit on the side. I really do believe he was driven; in fact, I think his biggest fault was probably that he was living too much in the spiritual world and not enough in this world. He had difficulty relating often with people in normal social contexts. Part of that’s because he completely had his head in heaven, but I don’t believe he was false at all.

Ron: Yes they did. Franklin’s first encounter with Whitefield was in Philadelphia. He went expecting to find arguments against Whitefield and to be disappointed by it; that was his whole purpose for going in the first place. In the end, he becomes friends with Whitefield; he ends up printing Whitefield’s sermons here in America. I mentioned earlier Whitefield’s involvement with the consumer revolution, and that’s one of the things he was doing was printing all of his works and often having those sent ahead of him so that people in an area he is going to have some idea who he is, and there is some interest already raised before he arrives. And that agent here, or the printer here, is going to end up being Benjamin Franklin, even though their religious views are entirely opposed.

Lloyd: “Entirely opposed” is the nicest way I’ve ever heard it put.

Lloyd: Other preachers outside the Anglican Church would sometimes get Whitefield’s sermons and just read them, and they were very popular even that way.

Ron: Oh yes, yes. One of the things that’s always intrigued me about the Reawakening in general is that it is cross-denominational. In fact, as I mentioned, Methodism was not a separate denomination at the time. It was a movement within the established church, within the Anglican Church. And every one of the denominations has a similar process going on. With the Presbyterians, they have their old side and their new side, and the Baptists have their old light and the new light. And this is going on all throughout North America. It’s actually bigger than that, but when you use the term “Reawakening” it’s usually referring to the United States specifically, or the colonies. These evangelical preachers, though, were invited to all of the various evangelical â€“ the new versions â€“ of these faiths to make their sermons. To me, that’s always been very intriguing. They’re seeing beyond the small differences between denominations â€“ even some major differences, like we talked about Franklin. I sort of hinted earlier about the large schism that will end up being created between Wesley and Whitefield â€“ a schism which in the end I think is part of why Whitefield is not a household name today â€“ well, if the Wesleys are â€“ but isn’t as large a name today as the Wesleys. And their difference of opinion is on a major religious issue which is mostly on whether salvation is by works or by grace, and by predestination â€“ which is a pretty large issue. But even before Wesley went public with his opinions on the matter, Whitefield tried to get him not to, not just because he thought Wesley was wrong, which he did, but also because he didn’t want to cause that rupture between the two of them or between the faith. He thought it was more important that they stay together in front of the ministry and not damage that than worrying about their differences of opinion. I think that is interesting. When Whitefield does go public with it, I mean when Wesley goes public with it, Whitefield will argue it, but in private letters before that, he tried to get him to stop from doing it just so they wouldn’t have to go public. And I think that is an example of what I was saying about that cross-denominational thing. Even major differences of opinion aren’t as important as the main message of Christianity to most of these people.

Lloyd: It’s also part of what you talked about where he had his head in heaven, and so he was trying to stick with that and not get into an argument about how many angels are on the head of a pin. He was in Williamsburg once as I remember. How did he do?

Ron: Well, that’s an interesting story on its own. I don’t know for sure why he never comes back. He does come back to Virginia, but he never comes back to Williamsburg. The original time, it was in December of ’37, ’38. It happens to be his 22nd birthday that he preaches here in Williamsburg. He is invited by the commissary, that’s the highest religious official in Virginia â€“ the Reverend Mr. Blair â€“ to deliver a sermon in Bruton Parish Church, a church that still stands today and is still an active church. Blair knows that he is popular but he does not know much about the controversy regarding Whitefield and invites him to come here. He gives his sermon. The sermon is his sermon #24 “What think ye on Christ?” in which he basically lays out rules that anyone who calls himself a Christian should be following, at least in his opinion, and it makes an attack against the established clergy, many of the clergy of the Anglican Church â€“ which is part of what the whole Reawakening is about. They believe that the Church has fallen asleep, and that’s part of the accusations he is making in this â€“ that religion has become more simply a set of moral rules than having any real involvement with Christ as a Savior. That is the accusation he is making. And if you read sermons of the period you can see why there is some justification for such a thought. Even some of the Anglican bishops preach a version of religion that is not very far removed from what they would call Deism in the period, which you don’t expect in an established church. So that’s the argument he is making.But the interesting part of the story, which has taken me far too long to get to, is that the day after the sermon, the Reverend Mr. Blair received a letter by way of the Bishop of London, and the Bishop of London is the man that has the authority over North America as there are no bishops here in the period â€“ and that letter says, “I understand the Reverend Whitefield is in your area; whatever you do, do not let him preach in your church,” which of course had happened the day before.

Ron: Exactly so. You’ll often read that Whitefield was giving sermons outdoors because the churches couldn’t contain the crowds, and there is some truth to that, his crowds were huge, but often he wasn’t being allowed to either â€“ because a number of his sermons are attacks on the establishment of the Church.