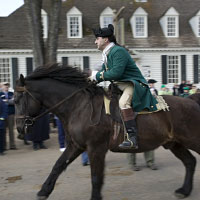 Rex Ellis shares his passion for a revolutionary new way of engaging guests in the role of Williamsburg in the founding of a new nation.

Lloyd Dobyns: Hi! Welcome to Colonial Williamsburg: Past & Present on history.org.  This is “Behind the Scenes” where you meet the people who work here. That’s my job. I’m Lloyd Dobyns, and mostly I ask questions. This time, I’m asking   Rex Ellis, who is vice president of Colonial Williamsburg Foundation’s Historic Area. New programming and interactive events are scheduled for the Historic Area in March. It’s all under the heading “Revolutionary City.”  What is that?

Rex Ellis:  Revolutionary City is a program initiative we believe will answer expectations by our guests and feedback we have received from them that indicates not only are they changing in terms of their expectations, but that they are desirous of seeing programming that number one, is memorable; number two, tells stories; number three, creates characters that they can get themselves involved in; number four, is interactive, immersive and is engaging for them so that they feel like they are part of an experienceâ€¦ and we believe that this new expectation must come with â€“ from an institutional standpoint â€“ our thinking that there is a dearthâ€¦ while there is a great deal of information out there about American history, we believe that youngsters, and Americans in general, are less understanding of, appreciative of, and knowledgeable of American history than ever before, and that one of the things Colonial Williamsburg can do well is contribute to enhancing that knowledge base.

Lloyd:  Are you doing this in a theater?

Rex:  We have the best three-dimensional theater in the country. We have the country’s largest outdoor history museum. We have buildings, we have sites, we have roadways; we have a whole series of environments. We have a town that we need to take greater advantage of and create the kind of environment that we think will provide a learning opportunity that’s second to none.

Lloyd:  Give me an idea.

Rex:   The Revolutionary City is a concept that will provide our guests with a portion of the Historic Area that will be dedicated to creating the most authentic 18th-century environment we can. We want to create an environment that does several things â€“ number one, focuses on the American Revolution, focuses on that period from1774 to 1781 when we believe the most dynamic, engaging, important story we have to tell here at Colonial Williamsburg took place. We believe that the story of how we became Americans, how we moved from a British monarchy to an American democracy is a story that has regional, national, and international repercussions. That story of how that took place needs to be told in a scope that we believe the Revolutionary City will allow us to tell it in.
How did we determine to break away from the Mother Country?

Why did we determine to break away from the Mother Country?

How did we fashion a government from folk who had never even been in politics before, had never governed people in the ways that we were suggesting people needed to be governed in terms of this democratic republic? And how did we in some way begin to do all of this under the auspices of a war with the most powerful country in the world?And so that story is what the Revolutionary City will be dedicated to telling every day from 2:30 to 4:30 (pm) in the eastern end of the Historic Area. We will on the first day talk about the collapse of the royal government, and on the second day we will focus our attention on citizens at war. And so the whole idea is to focus on how, number one, the collapse of the royal government and the war itself affected the community of Williamsburg, and how Williamsburg played a central role in what happened in the 13 colonies. There were documents that were written. There were decisions that were made in Virginia that then moved forward to become the philosophy of the entire 13 colonies, but Virginia in many instances initiated all of those conversations, all of those decisions, and many of the other colonies followed suit. We believe that’s an important story to tell.

Lloyd: I don’t think many people are aware that Virginia in those days was bigger than the next two colonies â€“ Pennsylvania and Massachusetts â€“ combined. Virginia then was a big, rich (for its day) place.

Lloyd: So that will be part of this Revolutionary City?

Rex: Part of the story will be to talk about how the lives of individuals were affected by the war and by this change in government. Remember, this was a British colony, we were British subjects, or they were British subjects, and in many instancesâ€¦what they were deigning to do was heresy â€“ it was rebellion. It was something that at that time was much more astronomical in terms of what they were trying to do than we make it out now, some 400 years later.  So, what we purport to do is to talk about the very real tensions, and the very real uncertainty of that periodâ€¦one of our historians likes to say that Williamsburg was a city in chaos. And, in many instances that is correct, because there were so many things going on that were globally important and significant in this little small town that it changed in a way that it could never go back.

Lloyd: If I heard you correctly, you said you are going to do that with individuals, so it’s not just a great big picture, it’s also a little one-person picture.

Lloyd:  Mmm-hmmm.  So, you might, for instance, deal with a shopkeeper who had to not sell anything because he couldn’t import anything from England.

Rex:  Absolutely. You might deal with a husband who is trying to decide how he can support his family who decides that one of the ways he can do that is by going and joining the revolution. Well, his wife doesn’t want him to join the revolution because she and her two daughters may never see him again, number one, but number two, they also know that he is an older man andâ€¦how well he will be able to survive, and to be a part of the war â€“ because the war was a young man’s war â€“ but here is a father saying “I need to take care of my kids. This is the only way that I know that I can do it, and so that’s what I am going to do.”  Well, the whole idea is to let our guests in on that conversation that husband has with that wife, to see how it affects the daughter who he then tries to explain to her why daddy is doing this, and why it’s important that I do thisâ€¦And so the whole idea is how are the variety of people that are in this town being affected by the war and being affected byâ€¦
There are scenes we are going to do that involve enslaved Africans, for instance, who talk about “here we are talking about liberty from the Mother Country, but it’s not going to affect us, we’re still going to be slaves no matter what happens in terms of the colonies.” So it is that dynamic, the dynamic of females the dynamic of enslaved blacks, the dynamic of poor whites interspersed with the work of the founding fathers and the work of those who are making these decisions that we want to play out on the streets, but we don’t just want it to play out, and there’s a fourth wall. We want it to play out and guests are surrounded by it, they are immersed in the situation, so that there are all kinds of activities. There are loading and unloading of wagons and carts, there are animals up and down the street, there is a cacophony of conversations going on about everything from last night’s cock fight to what just happened with Dunmore dissolving the burgesses. So the whole idea is to create this dynamic environment that our guests will be able to experience, and when I say experience I mean engage in the experience and also experience in a way that surrounds them and hopefully in that two-hour time gives them some sense of the real decisions that had to be made and the precariousness of those decisions in terms of whether or not we would be successful or not successful.

Lloyd: It sounds like something that might be fun to do if you had children. They might learn more than they’re going to learn in the classroom.

Rex: Absolutely. Our objective really is to engage families, to engage youngsters and to give them some sense of the real-world decisions that families had to make, that youngsters had to deal with in the 18th century.  We plan to use our junior interpreters as a part of that whole mix as well so that peers are talking to peers in terms of young people. So the whole idea is to create a series of experiences like this that are diverse enough that they can be inclusive of the demography and diversity of guests that we hope will come to experience it.

Lloyd: I don’t want to put a curse on Revolutionary City, but it sounds very educational. I know you don’t like to use that word for fear that it’ll drive people offâ€¦

Rex: Oh, man, you’re talking about Colonial Williamsburg â€“ educational? Absolutely!  But who says that education has to be boring?  The kind of education that I’m talking about I think will be entertaining, I think will be engaging, I think will be stimulating. I think the best education is all of that. I think that what we’re trying to do is challenge everyone to think about what took place, to think about the American Revolution. We have an advantage because we know how it ended, but we don’t know the dynamics that sort of brought all of that to fruition. What we want to do is to provide those dynamics, that story, that tension, and then allow our guests â€“ yes, you’re right â€“ to learn something as they are engaging and being a part of what we think will be an exciting experience.