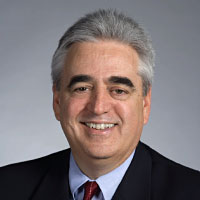 Colonial Williamsburg's Bill White shares his passion for teaching American history and citizenship to students across America and beyond.

Lloyd Dobyns: Hi! Welcome to Colonial Williamsburg: Past & Present on history.org.  This is “Behind the Scenes” where you will meet the people who work here. That’s my job. I’m Lloyd Dobyns and mostly I ask questions. This time, I’m asking Bill White who is the executive producer and director of educational program development at Colonial Williamsburg. Now, what is the executive producer and directorâ€¦

Bill White:  (Laughs) Well, we have been working to take the mission and story of Colonial Williamsburg outside the bounds of the museum, to carry it to teachers and school children all over the world. We have about 150,000 school children who come and visit Colonial Williamsburg every year, and, I don’t know, six or seven years ago [we] just decided that wasn’t enough. If we really were going to have an impact on children and the teaching of American history around the country, we would have to reach millions more â€“ teachers and students. So, we began to conceive of ways to do that.

Lloyd:  So on the educational field trips, how are those done â€“ are they television, are they computer, are they what?

Bill: Yes, they are all of those things. (Laughs)

Bill:   We send a live television broadcast out of here every year, and in many places around the country you can find those on your local educational channel or on your local PBS station. Educational channels around the country pick that up and carry it. We have broadcasters in 48 states around the country. We also, though, stream that program live on the Internet for registered schools. On the Internet, we have Web activities and teacher materials for teachers and students to be engaged with, but on the day of an electronic field trip, we do a broadcast history story that we send around the country and then we provide opportunities for students to call us live during the program and ask their questions. Here in another week we’ll be doing a program called “Soldier of Liberty,” which is about a young man who joins the military, Virginia’s first army, as the Revolution is happening. Kids will be able to call in and talk with him and other characters live on air and ask their questions.

Lloyd:  So these are real people, these are not storyboardsâ€¦

Bill:  No, these are stories about real people who lived in the past.

Lloyd:  Where do you get your actors?

Bill: Most of the actors that we use for these programs are actually here on site â€“ they are the interpreters, the people you meet in costume in the Historic Area every day.

Bill: Well, we also depend on a script, but when it comes time to answer kids’ questions directly, live on television, you can’t count on a script for that; you’ve got to have the knowledge base, because those kids ask all the questions that you haven’t thought of yet, so you’ve got to be able to reach into your rich experience with history to be able to pull those answers out and make them real and exciting for kids.

Lloyd:  Who picks the story ideas?

Bill:  Well, the group I work with is a group of about eight or ten educators and media producers here at the foundation, and every year we sit down and pick the topics that we will work on for an upcoming season. We have to pick those topics almost two years in advance, because it will take us two years to write scripts and do research and create broadcast programming and Internet activities before it is actually there and available for kids to use.

Lloyd: I would guess that you don’t do these in summertime?

Bill: No, no, well, we do a live broadcast seven times a year â€“ the first one is in October; the last one is in April every year. We spend our summer shooting video and producing and getting ready for the upcoming season.

Lloyd:  Yeah, that was sort of obviousâ€¦when you first did it, were you convinced it was worth continuing, or did you have doubts, or were you worried about it, orâ€¦?

Bill: Actually, I wasn’t here the first year that they did this. I am a latecomer. I have only been doing this for six years. There was an experimental year in which the television producers here at Colonial Williamsburg actually tried several different formats in order to find the best format. We had a whole year of experimenting with programming and talking with teachers and interacting with classrooms to figure out what was going to be the best way of doing this live event, live television event for kids. We very seldom do anything that we don’t consult with teachers first. Teachers help us write the lesson plans for every one of these electronic field trips. They are really practical hands-on things that teachers can use in their classroom. These are materials, for the most part, that have been actually created by teachers.

Lloyd: I was going to ask what sort of comments you got from teachers and what teachers wanted for the future â€“ are they content with what you are doing, or do they want more emphasis on this or that, orâ€¦

Bill: Wellâ€¦I think that there are a whole series of thingsâ€¦ Most of the schools we work with are elementary and middle school kids around the country with the electronic field trip series. There are certain standards that elementary school teachers are interested in and want to have more programming for â€“ what were things like in the past, how did people live in the past, what was daily life like in the past â€“ are topics that every elementary or middle school teacher comes back to over and over and over again.

Some of the others, though, really have to do with important key events in American history. So, we spend a lot of time working on issues about what was the American Revolution and why was the American Revolution so important to us, or what was slavery in colonial America and in the antebellum period, and how has that affected our history. Those are issues and topics that teachers are looking for more and more programming for, and we are just really proud to be there and offer them the kind of curriculum materials that they need in the classroom.

Lloyd:  Do you ever repeat programs, because you’ve got a new audience every five or six yearsâ€¦

Bill: Actually, when we produce a new program, we usually broadcast it twice. There have been a couple of occasions when we broadcast a program three times, and there’s been once or twice that we decided we just weren’t going to broadcast that one again â€“ ever, but most often we’ll produce a program, and we’ll broadcast it twice, usually about two to three years apart.

Lloyd:  Well, you can understand that there would be one or two that you weren’t terribly proud of, but I would think that most of them, after a couple of years, you’ve got a whole new audience.

Bill: Well, we’ve got a whole new audience, and today digital technology is going to allow us to make these things available on a more consistent basis, so we are talking now about how we can take all this material and put it up on the Web and make it digitally accessible for classrooms around the country so we are not quite as dependent on that live television broadcast schedule, and so that teachers can access that material when it is best for them to access it in their curriculum.

Lloyd: You said elementary school and middle school â€“ are you ever going to branch out into high school, or is that not possible?

Bill: No, we are working now on the initial steps for developing a program in American history and American civics for high school students that I’m extremely excited about.  I think it is going to be a new and different innovative approach that will bring that excitement back.

I think that we as a country actually find ourselves in a pretty dangerous position. I think we’ve probably got a couple of generations now â€“ of Americans â€“ who don’t really understand their American history. And that American history, those are the lessons, the lessons about what it means to be an active, engaged citizen in our republic. The republic doesn’t automatically renew and refresh itself. It only refreshes itself because individual citizens are engaged and active with that republic, and if we’ve raised a couple of generations who don’t understand thatâ€¦who don’t understand they have to be engaged in order for the republic to continue, then we are in danger. So, we’re looking at an American history, American civics program that would give kids an opportunity to look at some of the enduring issues in this republic, some of the things that have been with us from the very beginning. To look at how generations in the past have dealt with those issues, and then turn around and ask the question “Where is that issue alive in my community today, and what am I going to do about it? Where do I stand on those issues, and what am I as an American citizen today going to do about it?”

Lloyd:   So instead of writing it out on the blackboard, you dramatize it. You get everybody involved.

Lloyd: I can understand with elementary and middle school, but I’m not sure anybody can get teenagers involved and engaged. Is that a separate challenge, because, you know, they like to sort of pretend they don’t care?

Bill: Well, yeah, teenagers pretend that they don’t care. You need to come out on the road with me, though, and you need to see some of these high school teachers that are out there and around the country who know how to make that connection, who know how to make this material alive and exciting, who have those kids eating out of the palm of their hands, and have them interested and engaged. It warms your heart, and it gives you hope about what this country actually can be.