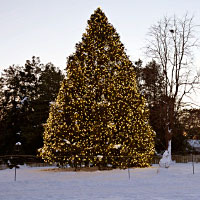 Bob Doares talks about playing the part of the German professor who brought the tradition of the Christmas tree to Williamsburg in the mid-19th century.

Lloyd Dobyns: Hi! Welcome to Colonial Williamsburg: Past & Present on history.org.  We’re on location today with “Behind the Scenes” where you will meet the people who work here. That’s my job. I’m Lloyd Dobyns and mostly I ask questions. This time, I’m asking Bob Doares, who is a trainer at Colonial Williamsburg, but he is something else that is more important at Christmas time. And, what’s that?

Bob: â€¦who lit the first Christmas tree in Williamsburg in 1842.

Bob:  Well, Professor Minnigerode was a new arrival in Williamsburg as the new professor of German and ancient languages at the College of William and Mary here, and he took a room boarding at the home of Judge Nathanial Beverly Tucker. We call that house the St. George Tucker House today. And, on Christmas Eve of 1842, that first Christmas that Professor Minnigerode was here, he showed the Tucker children how the Germans decorate an evergreen tree at the holiday time.

Lloyd:  I read an article in the [Colonial Williamsburg] Journal about him â€“ about his first Christmas tree. That was probably one of the most popular developments in Williamsburg in those days. According to the article, the next year everybody had a Christmas tree.

Bob: Right, it was a custom that was slow in coming to America in English America. Germans and Dutch folk in certain places and certain colonies had perhaps lit a tree here and there, but in this British colony, in Virginia, in the state of Virginia, it was mid-19th century before the custom of the Christmas tree came about at all, and Minnigerode was apparently the first to actually bring the custom to Williamsburg itself. But, by the next Christmas, half the houses in Williamsburg apparently had Christmas trees as well, Judge Tucker himself lit one, and even today at the Tucker House a Christmas tree has always been a part of the tradition, although for Colonial Williamsburg as a whole, Christmas trees are out of time, and we don’t use them in the Historic Area, but the Tucker House being the place where the first one was lit, there has always been a tree there.

Lloyd: You wrote an article about Christmas in the colonies. Is that more in time or less in time â€“ is it authentic for Williamsburg, what you wrote?

Bob:   The article is about how Christmas is in colonial times celebrated or not celebrated, depending on where we are talking about. The Church of England colonies like Virginia, and Georgia, and the Carolinasâ€¦Virginians celebrated Christmas. The Church of England acknowledged it; Maryland, where there are a lot of Catholics, acknowledged Christmas, but certain colonies such as Pennsylvania, Delaware, New Jersey, much of New York, where there were a lot of Puritans, or Presbyterians, or Baptists â€“ folks whose denominations didn’t acknowledge Christmas, Christmas was ignored. Pretty much just like any other day of the season, stores stayed open, no church services were held, so it just depended on where you were in America as to whether you had Christmas celebration or not. Some of the New England colonies outlawed Christmas as had been done in England during the Puritan time of Oliver Cromwell.

Lloyd:  To get back to the Christmas tree, because if I don’t I will be punishedâ€¦nowadays, if you have a nice big house, you will have a 15, 16-foot tree all decorated. In those days, they were table-top trees, right? Or have I read the wrong thing?

Bob:  No, they were small, smaller trees, there is a famous, well-known print of a Christmas tree that was lit by Queen Victoria and her German husband, Prince Albert, in the mid 19th century, and that print shows a tree, maybe three or four feet tall, with candles and other decorations and Queen Victoria and Prince Albert and their children gathered around the tree. That print was so widely distributed and so popular that it did much to popularize the idea of having a Christmas tree, not only in England but in this country as well.

Lloyd:  You’ve said “lit” a couple of times, and then you said “candles” on that tree, so let me go back â€“ these are candle-lit, right?

Bob:  Candle-lit, yes, before the days of electricity or electrical lights, wax candles were wrapped in place with wire, fastened to the trees, and to the branches with wires, and candies and toys might be placed on the branches, and then as Professor Minnigerode says to the children in the Christmas account that we are presenting this Christmas at Colonial Williamsburg, “We are careful when we decorate ze tree to separate ze branches and wrap ze candles in place with wire, because there is much danger if one is careless with live candlesâ€¦”

Lloyd:  I was going to say that would scare me to death. Obviously from your pronunciation of his name and the lines you just gave, you are a German speaker.

Bob:  No, he had actually studied law in Germany. He was a native of the city of Darmstadt, and studied law at University of Giessen, where he got in trouble. A friend of his, named Georg BÃ¼chner, who was a playwright, decided to print and distribute a subversive pamphlet inciting the peasants of Hesse to revolt against their rulers, and BÃ¼chner and Minnigerode, his friend, were found with pamphlets in their possession. And so BÃ¼chner fled to Switzerland. Minnigerode spent 18 months in prison in Germany. And as soon as he was let out, made his way to Bremen in the north of Germany and hopped a ship to America. Lived in Philadelphia for a time, where he got a job teaching German, and it’s there that he saw an article in a Philadelphia newspaper advertising this position at the college in Williamsburg for a German teacher and teacher of ancient languages.

Lloyd:  Was he â€“ I think I remember this â€“ was he ever rector at Bruton Parish?

Bob: Yes, he of course came to America as a Lutheran, and very shortly after his arrival, within the first couple of years after his arrival, he converted to become an Episcopalian, and went to seminary and was ordained as a priest, worked at Bruton Parish Church for a short time. The college reorganized its faculty in I think 1848, and he left Williamsburg after only being here about six years, took a church across the James River in Prince George County â€“ Merchants Hope Church, which still stands, I believe, went to Norfolk for a while as a priest, ended up then in Richmond as minister and rector at St. Paul’s Church which is today even just adjacent to the state Capitol building. So, he was the minister there for 33 years during the Civil War and was the father confessor to Jefferson Davis, preached on at least one Sunday during the war to 14 Confederate generals sitting in his pews at St. Paul’s and became then chaplain at the Episcopal seminary in Alexandria, where he met in 1890, Dr. Goodwin, the founder of Colonial Williamsburg, who was a young seminarian there.

Lloyd:  It’s one of those peculiarities. Here is a man who did a little bit of everything you can imagine in life, including going to jail for 18 months, but he is remembered for his Christmas tree. It doesn’t sound right, does it?

Bob:  It doesn’t. And, it’s a charming tale, it certainly is. As we present this Christmas for the first time at the St. George Tucker House, in our program called “Christmastide at Home,” the lighting of that first Christmas tree in Williamsburg, it’s quite a very sentimental feeling to know that has never been presented ever here at Williamsburg and to be a part of this first reenactment of that lighting of the first Christmas tree in Williamsburg is really an honor and a thrill for those of us who are involved in it.

Lloyd:  So this is not a traditional thing being done for the 157th timeâ€¦

Bob: â€¦no, this is the first time ever that this event of Professor Minnigerode lighting the tree at the Tucker house has ever been done.

Lloyd:  That must be quite fun. Did you know it was going to be done?

Bob: It was sort of an accident that I found out it was going to be done. I was participating in a Colonial Williamsburg television production, an electronic field trip, not long ago, and fell to talking with one of the other participants, Kevin Ernst, who’s in our evening programs division here, and Kevin mentioned that he had scripted and was planning to direct the story of the lighting of Williamsburg’s first tree this Christmas, and I thought I might try out for the part, and I did, and will be portraying Minnigerode starting on December 5.

Lloyd: If you hadn’t gotten the part, there’s no justice in this worldâ€¦

Lloyd:  Did you study him because you just liked him? You know everything about himâ€¦

Bob:  Well, I started out with an interest in the Tucker family myself. Dennis Montgomery, the editor of our Colonial Williamsburg Journal, asked me to write an article about Judge Nathanial Beverly Tucker, in whose home Minnigerode lived at that time, in 1842. Judge Tucker himself was a professor of law at the College [of William and Mary,] and an interesting fellow in his own right. So, in reading about Judge Tucker, I learned that Tucker, under the influence of Minnigerode, had found an interest himself in German, and Minnigerode had taught Tucker German in a period of about six months, to such a degree that Tucker himself was able to publish a couple of translations of German plays in the Southern Literary Messenger, a literary magazine that was published in Richmond before the Civil War. There was a close connection between Tucker, Minnigerode, and another young man who was writing for the same magazine â€“ Edgar Allen Poe â€“ so it is an interesting trio all the way around.