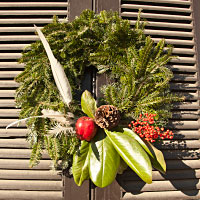 Laura Viancour talks about the labor-intensive job of decorating the Historic Area for the Christmas season year after year.

Lloyd Dobyns: Hi! Welcome to Colonial Williamsburg: Past & Present on history.org.  This is “Behind the Scenes” where you will meet the people who work here. That’s my job. I’m Lloyd Dobyns and mostly I ask questions. This time, I’m asking Laura Viancour who is coordinator of garden programs at Colonial Williamsburg, and I guess in charge of holiday decorationsâ€¦

Lloyd: Okay. I used to come here at Christmas time only to walk around so I could look at all the stuff. Who gets all the ideas?

Laura:  Well, the designers do. We have about eight gardeners that we pull at Christmas time to design the decorations. And, they will use each site as their inspiration. Each designer has about eight to10 houses that they are responsible for. And sometimes they   think, “well what was the use of the building?” and they will incorporate products. For example, at the wig shop they might use the clay rollers and the bone combs in the design. Or, at the leather shop they’ll actually use straps of leather. We do have restrictions, though; we do use materials that the colonists would be familiar with, so all plants that were here in the 18th century as well as products that were here. So, no tinsel, no Santa Claus, bows, and that sort of thing.

Laura: No twinkle lights. No. Trying to keep it an old-fashioned Christmas.

Lloyd: Now the one thing that I have seen here in the holiday season are electric candles.

Laura:  Right. That goes back to the restoration in the 1930s.  We were trying to solve the problem of decorating for Christmas. Because there was a town of people here at the time that celebrated Christmas, however we had very little research showing that the colonists decorated. So, Reverend Goodwin, who was part of the creation of Colonial Williamsburg and Kenneth Chorley, the [foundation] president at the time, came up with the idea “well, let’s do an old-fashioned Christmas based on traditions.” And one tradition was putting candles in the windows to celebrate special events like the King’s birthday or a victory. So that is what started the candles in the windows. And, originally when we first did it we actually had people in the buildings all night making sure the candles didn’t burn down. So in the 1940s we moved to electric lights.

Lloyd:  A smart move, I would say.

Lloyd: When is the holiday season here?

Laura: We start the weekend of first weekend of December. Our big holiday kickoff is Grand Illumination, which is the first Sunday in December, and the decorations stay up until a few days after New Year’s.

Lloyd: I’ve always been curious. You’re using natural things and things that the building was used for, what’s the most frequent question that a visitor asks?

Laura:   How long do they last?

Lloyd:   Okay, how long do they last?

Laura:  It depends on the weather. If you are on the shady side of the street, your decorations are going to hold up better than if they’re in the full sun all day. The ideal temperature is a refrigerator. If everything was like a refrigerator they would last much longer. What’s really hard is when you get that freezing and thawing of the fruit. That wreaks havoc. And what materials you use. Apples keep much better than your citrus fruit. Your firs hold up much better than the magnolias. So it depends on the weather and what materials you use.

Lloyd: Do you have to make all new every year?

Laura: Yes, and that’s I think what most of our guests don’t realize is that the decoration that goes up the first week in December is not the one taken down in January. We get together Veterans Day and start pulling together all the materials. The week of Thanksgiving, the designers start assembling all the decorations. And just because it’s one house doesn’t mean it is one decoration, because that one house could have three dependencies with several decorations. So they make them all up, and they hang them the week before Grand Illumination. The following week, they make replacements, and then hang them the next week. So, the decorations are changed out every other week.
Now, we have, because of the extended season, tried to use more dried materials, but it is still a very big undertaking.

Lloyd:  So, the decoration I see the first week of December is not the decoration you take down January whatever it is. They’ve changed what â€“ two or three times?

Laura: Yes, and sometimes, living in Virginia, you know, we might get an 80-degree couple of days, so we’ve actually had to change things out four times â€“ nothing like 80 degrees to turn pine from green to brown.

Lloyd: Well, that would turn me from green to brown, too! I never realized that it had to be done that manyâ€¦I meanâ€¦I thought you had to make them every year and you hang them up, and you take them down, and that was it â€“  but that’s not it at all.

Laura: No, and we also have the carpenters help us hang everything on nails and whatever because they know which buildings are 18th century and which are not, so we have to be very careful when we are hanging the decorations â€“ and some of them are very heavy, they can be 50 pounds â€“ so you need to know what you are doing when you are hanging them up.

Lloyd: Oh, oh, oh ohâ€¦ along with knowing what you are doing when you are hanging them up, there are contests, which I had forgotten. What are the contests?

Laura: The contest again goes back to the beginning of the restoration trying to get that community to buy in to decorating in the natural way, to forgo the Santa Clauses and the tinsel, so they came up with a decorating contest to award the townspeople for their decorations. Now today in the Historic Area, the buildings that aren’t open for exhibition are rented to employees. So, there is a contest among the employees for the best decorations. We have guidelines as far as design elements, appropriateness to the building, and also details. We don’t want to see any glue globs or anything like that. That’s an automatic disqualification â€“ a glue glob. (Laughs) And, we have three judges and a technical advisor that go out and judge the buildings. There is a ceremony at the DeWitt Wallace Museum where they are awarded a cash prize and a blue ribbon.

Now, our designers, the exhibition buildings we design are not eligible for the ribbons. However, some of the employees can hire them. So they are judged in two categories â€“ either professional or amateur.

Lloyd: Because if you were hiring a designer from Colonial Williamsburg, you’d have kind of a better chanceâ€¦

Lloyd:  Okay, among the contests, most unusual wreath?

Laura: Well, I guess “unusual” could be used in different ways, but what I like is the creativity. I am thinking more of the employees than our staff â€“ when they really try hard to use their creativity and use the building. We’ve had some that have taken small eggs, not a chicken egg, but something smaller, blow them out â€“ they live in a kitchen â€“ so they’ll take the time to blow eggs out and use them as part of the decoration for the kitchen. Or, we’ve had some tenants that live in laundries use soap balls, and that sort of thing. I do remember one year a lot of peacock feathers â€“ that obviously stands in my mind. But we don’t have too many of those any more.

Lloyd: I’ve never seen peacocks around here but obviously they got ’em from somewhere.

Laura: Well, peacocks were around, we just don’t know if they were in Williamsburg, but there were a lot of peacock feathers.

Lloyd: Where do you gather all the materials that you use?

Laura: Well, the designers are already thinking â€“ after Christmas is over â€“ when we’re putting decorations away they are thinking about next year, because some of the materials that they want to dry they have to do that all season long. They can’t wait until September and say “oh I need to dry some of this.”  So, throughout the summer they are harvesting. We do have to buy a lot because of the scale of things, so we buy from various sources. We buy all our roping and our pine wreaths, but we have to make our own boxwood wreaths, because of the size and the quality. And we’ll harvest the boxwood right from the gardens. And we get all our fruit from our commissary â€“ and it’s a lot of fruit.

Lloyd: Yeah, I would guess so â€“ cases and cases.

Lloyd: What is the hardest thing to find, to get?

Laura: We’ve been very fortunate in that the local grocery stores have tried to supplyâ€¦I think it is hard sometimes to get the small pineapples in the small size that you need them, but otherwise we’ve been fortunate.

Laura: Well, it takes a lot of time and effort so what they’ll do is maybe just go with just a simple wreath, or something like that. But that’s what I think is so incredible is the effort that most employees put into this. And our designers will work with them, too, because people go away at Christmas, and these decorations need maintenance. The guest that comes and sees the blue ribbon next to a brown wreath because the people are out of town doesn’t understand that! So our design staff will go ahead and keep it up or replace it if need be.

Lloyd: I don’t think they understand that they have to be changed out three or four times during the season.

Laura: Well, the employees do, but the guests don’t understand that, no, they will ask, another question they ask is “what preservative do we use?” And we don’t use any, because we are changing them out. And also people are curious, and often times they’ll stick their fingernail in the fruit to see if it’s real; so we don’t want to use preservatives in that way either.

And so, every morning, we go out, two of our gardeners go out every morning while everyone is snuggled in their beds and check every piece of fruit, replace it if necessary, because fingernails or food bites from animals â€“ sometimes humans â€“ have to replace the fruit, and then we have to freshen the greens with water. That’s done every morning, so again, freshening all the time.

Lloyd: Now, you’ve got me enchanted, what do you mean “human food bites?”

Laura: Well, our designers, our greens guys are so experienced, they can tell the difference between a bird, a squirrel, and a human bite, and I guess someone out there was really curious or really hungry, and there have been bites.

Lloyd:  Really had a good time.

Laura: Had a good bite of apple. People are curious souls.