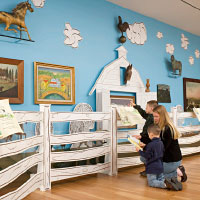 Lloyd Dobyns: Hi! Welcome to Colonial Williamsburg: Past & Present. This stuff is new and you won’t hear it any place else. This is “Behind the Scenes” where we let you meet the people who work here. That’s my job. I’m Lloyd Dobyns and mostly I ask questions. This time I’m asking Christina Westenberger a museum educator, and the first question obviously is what is a museum educator?

Lloyd: How many school groups come?

Christina: Surprisingly when school groups come to visit Colonial Williamsburg they want to visit the Historic Area rather than spend their time indoors at the museum. I guess that’s not so surprising. So, not a great number but certainly our local school children come to visit, specifically the Abby Aldrich Rockefeller Folk Art Museum for our holiday exhibitions â€“ where we have an opportunity to showcase dollhouses, toys, fun things in the collection that children really have an interest in.

Lloyd: I’m not sure of this, but is a new wing being built on the Dewitt Wallace Gallery for the Folk Art Museum?

Christina: Actually when the Dewitt Wallace Decorative Arts Museum was built back in the 80s, there were two gardens that were intended to become exhibition space and they are taking the outdoor garden and creating the Abby Aldrich Rockefeller Folk Art Museum in that space.

Lloyd: So it’s going to get bigger.

Christina: We’re very excited. We have more square footage in our new space than we had in the old Abby Aldrich Rockefeller Folk Art Museum, and our exhibits for the grand opening of that space in the fall of 2006 are just fabulous.

Lloyd: You’ve already laid those out?

Christina: Absolutely! We have about a ten-year plan that we work on in the museums.

Christina: We are far out in the planning stages for the future.

Lloyd: Actually, I guess you would have to be. When the children do visit, and do come around and do see the exhibits, I’ve always been curious, what would children ask about art and museums?

Christina: They ask a lot of questions. I think in many cases they are interested specifically in what the object is made of. Children are very tactile. They want to be able to touch it. Certainly that is not something they can always do in a museum. Certainly that’s  something we don’t encourage regularly â€“ for them to touch objects, but we do try to put reproductions in the galleries so kids, and adults even more so than children who like to touch, can touch an object.

We like to center our programs not only for school children but also for visiting families, specifically around objects within the collection and try to tell a story to them based on the objects.

Lloyd: Does that work? Does it keep them interested?

Christina: It does. It does keep them interested. This morning we had a “Wee Folk Program,” which is a program we offer on Wednesday mornings. We read a story, take a tour, and enjoy some sort of art activity. Today we read a story about an elephant named Elmer who looks like a patchwork quilt rather than other elephants. We had an opportunity to look at the quilts that are on exhibit and compare Elmer to the quilts, then take a look at an elephant on exhibit in the Folk Art collection. Then they created quilts of their own out of paper.

Lloyd: That would be fun. I’d like to go do that myself.

Christina: You should come! Any Wednesday. You’re always welcome.

Lloyd: I don’t think I fit the category of “Wee Folk.”

Christina: You’d be surprised at the number of adults who participate.

Lloyd: Yes, I would be. Are there a lot?

Christina:  There are. I think any advertisement within our This Week which advertises all of the programs here at Colonial Williamsburg, when our visitors see an advertisement that says “hands-on activity” or “create a piece of artwork,” I think anybody and everybody is interested in that opportunity, because people like to take something home that they have made. They have a chance to create something; they can take it home and remember it, and keep it with them for all time.

Lloyd:  Put it on the front of the refrigerator doorâ€¦

Christina: Or give it away as a present, or put it in their book, or what have youâ€¦

Lloyd: That would be interesting. Uhâ€¦this sounds like a rude question, and I don’t mean it to beâ€¦to do your job, you would have to get along with all manner of people. Would you call yourself a people person?

Christina:  I think I would have to call myself a people person.

Lloyd: That’s where I would fall apart in a museum. (Laughter) How did you get into it?  I meanâ€¦what you are doing â€“ education and museums?

Christina:  I was an interpreter here at Colonial Williamsburg for a few years, and then had the opportunity to meet a colleague who had the type of job that I have within a museum where she planned programs for school groups and families, and she really showed me that you can take an art collection or a decorative arts collection, and you can talk about writing, you can talk about history, you can talk about math, you can talk about science; and you can look at all elements of education or fun by looking at objects within a collection. Just by spending some time with this particular colleague and really learning about how she went about creating these types of programs, I saw that we could really draw our visitors around someâ€¦.

Lloyd: Great word, “thing.” Saves you all the time. So yours was sort of on-the-job training.

Christina: Absolutely. I definitely have a degree, I have a degree in history, though, it was medieval church history that I concentrated on in college â€“ not a great help when it comes to interpreting American history on the eve of the Revolution, but interesting. But I think by meeting with colleagues and learning about what they’re doing and taking all these different ideas and kind of mixing them up in a blender and coming out with something that works here at Colonial Williamsburg with our collections, with our objects, and then making some sort of connection or tie to the Historic Area is my goal.

Lloyd: You said you were planning ten years out. Are you looking for new things that you’ve never tried before that you think maybe kids would like or adults would like, or some sort of group would like?

Lloyd: Always. I guess that would keep it new.

Christina:  Well that’s the beauty of working in a museum. If an exhibit comes, and you decide you’re not particularly interested in that exhibit, just wait a year or two, and it’ll be gone, and you’ll never have to see it or those objects again. But the beauty of it is you always have something to look forward to. There are always new exhibits, and always new opportunities, though on the flip side, exhibits come that you absolutely fall in love with, and you never want them to leave, and  then when they do leave, it’s very sad.  And, it’s not that the exhibits or the objects themselves are necessarily leaving or going away forever, but because it is a museum, and we are protecting those objects, we have to be careful and get them off view and let them rest or sleep for a while so we can bring them out again and again and again.

Lloyd: I have never heard the term “sleep” with a museum exhibit. Is that the real concept you think of?

Christina: That’s how I use those terms, though I am not a curator or a conservator, and I’m sure that they might use different verbiage, but there are a couple of objects in the collection that are my particular favorites. “The Old Plantation,” which is a water color painting of a slave scene, and, a fraktur, which is a German type of folk art water color â€“ those two objects are water color on paper and are two of the most delicate objects in the collection. So we can only have them on view for short periods of time because of light exposure. So, when we are done with those, in my mind, we take them off view and we put them to bed and let them sleep for a while, and then we can bring them back out. Now, remember, I work with kids regularly, so explaining these things to childrenâ€¦

Lloyd:  That’s okay, you just did it for me, too. Children. You said you have some favorite painting, two favorite paintings.  Do children agree with you, or do they know they are your favorites?

Christina: Oh I am very verbal and definitely say, “this is one of my favorite objects,” because even though it is not still on exhibit, I still use it, or still use those two pieces regularly.

Christina: We take tours and talk about what we like and what we don’t like. We go through the building, and one of our young guests will say “Ooo I really like that object.” And, we’ll ask them “well why do you like it; what is it you like about the object?” And, then we’ll go around in a circle and say “yeah it’s okay, or “no, I don’t like that at all, and this is why I don’t like it.” There’s an object in the collection that in a child’s mind is a little controversial. It’s a carved tobacco figure, which makes it controversial; it’s an advertisement, in essence selling tobacco products. But it’s a carving of a gentleman named Fox. He was an actor, and he played a stock role called Humpty Dumpty. Some children love him because he is a clown.  Other children are a little afraid of him, because he is kind of scary looking in their mind. So, it’s fun to bring up that discussion with children, and I would say 99% of the time we’ve got 50 kids who really like him, and 50  kids who don’t like him, and there’s no one in the middle.

in Education, Museums | No comments