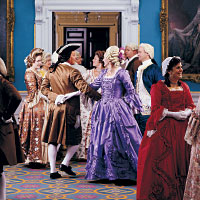 Lori Loughrey enjoys “dressing up” to lead tours and explain domestic life in the 18th century.

Lloyd Dobyns: Hi! Welcome to Colonial Williamsburg: Past & Present. This stuff is new and you won’t hear it any place else. This is “Behind the Scenes” where we let you meet the people who work here. That’s my job. I’m Lloyd Dobyns and mostly I ask questions. This time I’m asking Lorie Laughrey who is a costumed interpreter with domestic sites in the Historic Area. The first obvious question is “What do you interpret” or “who,” I guess?

Lori Loughrey: I’m in “third person” so I don’t interpret a character. I give tours and help staff the buildings here in town, so I’m normally at the Wythe House, the home of  George Wythe, and the James Geddy House, and help interpret their families, and what their domestic life was like on those sites.

Lloyd: Okay. Interpret for me. What was domestic life like?

Lori: Well it’s very different than it is today. Very different. You’re doing the laundry by hand. Building a fire. Doing the laundry. We do kitchen work. So, we’re cooking in the kitchens, and we’re doing all that with fire, having to get up in the morning, start the fire, and keep that going all day. It takes you all day just to make the dinner. We’re also talking about what life was like for some of the slaves on these properties, because some of the people we talk about have slaves, so we’re discussing them a little bit, too.

Lori: I’ve always loved history. Always. I’ve got a bachelor’s degree in history and I’ve always wanted to do something like this. I love history.

Lloyd: How long have you been doing it?

Lori: I’ve been here just over five years. I worked at another museum, in New York before this.

Lloyd: Did you move here from New York?

Lori: Yes. From Niagara Falls, New York, just outside of the Falls, just to work here.

Lloyd: Okay. What other things do you do? Because I know you do!

Lori: I do a lot of different things here. I’m part of our colonial dance ensemble, so I spend some of my evenings dancing in the Capitol or the Palace, in the ball gowns. I lead tours, evening tours, “Legends,” “Lanterns.”  “Legends” tours are scary stories and myths from the 18th century. “Lantern” tours are tours of the trade shops. And, I just started doing our new tour which is on crime and punishment.

Lloyd: Now, what go you into crime and punishment?

Lori: Well, mainly here, I’ve done tours of the Capitol and the Courthouse and the Gaol at other times during my five years here, so I started to learn a little bit more about it, so when they developed this new tour I said, “I can do that. I know how to talk about those things.” So, I auditioned for that.

Lloyd: You live in the Historic Area?

Lori: Yes. I just moved in. In January. A couple of months ago.

Lloyd: How is that?

Lloyd: Has anybody just sort of wandered in to look at the house?

Lori: When I was moving in someone tried to walk into my basement, which has an outside entrance. But other than that, mine is secluded enough that I don’t get too many people trying to walk in. They tend to walk right past it.

Lloyd: Your friends you’ve left behind in New York, are they curious about why you’ve moved to the South and lead tours in an 18th-century reconstructed town?

Lori: Not really! They all know me pretty well. They know I love history. They know I love to dress up, being in costume is wonderful. I grew up outside of Buffalo so the “moving South thing” was pretty obvious to most people I know at home.

Lloyd: Why do you like costumes so much? Do you know? Have you ever thought about it?

Lori: I’ve thought about it a little bit. I think every little girl wants to play dress up and have it be her job. I love the 18th century costumes. I love dressing up in any kind of past clothes. I’ve done medieval clothes; I’ve done Civil War clothes. It’s different. You feel different when you’re dressed up.

Lloyd: When you are dressed up, and you’re interpreting and leading tours, are you feeling the way you think people in the 18th century might have felt, or is it you with 18th- century clothes on?

Lori: It’s more me with 18th-century clothes on, since I don’t interpret a character. Someone can ask me about televisions or modern day things and relate, so I’m not really thinking in the 18th century, I’m giving a tour. I’m talking about what people did, but you tend to talk differently when you talk about it, and you think more about the past while you’re giving tours.

Lloyd:  You’ve been doing it now five years. How long do you think you’ll do it?

Lori: I’m not sure. I wouldn’t mind doing this forever. I have a lot of fun with it.  It’s a different way of teaching people without being in the classroom which I reallyâ€¦I also has some education background, and this seemed to fit just so well with me to talk to peopleâ€¦

Lloyd: Does the education background help?

Lori:  A little bit, yeah, because youâ€¦I’ve had some classes in education in college, and it helps dealing with...well, we get a lot of children obviously through here, younger persons, and it helps with that.

Lloyd: What questions do the children ask?

Lori: They ask a lot about the clothes, that’s really whatâ€¦

Lloyd: â€¦well, you have that down pat.

Lori: I have that downâ€¦yeah, I know all the clothes pretty well. They ask a lot about that. They ask what kids did back then, what kind of toys did they haveâ€¦ they seem to be very interested in just what kids did. What did they do back then, they tend to think it was work all day long, and it’s nice to tell them well, sometimes they had time to read, and had time to play with toys, and play with their brothers and sisters, and there are a lot of similarities, and they like to hear about that.

Lloyd: How about the adults?

Lori: Oh they can throw some pretty tricky questions at youâ€¦some that you wouldn’t even anticipate. But with some of our buildings it tends to be whenever there is something very unusual or out of place or something they’ve never seen before. We used to have a vacuum pump in George Wythe’s house, and everybody who walked through the door asked about the vacuum pump, so it was something they were totally unfamiliar with, and it’s those things they tend to ask a lot about.

Lloyd: Okay, I’m totally unfamiliar with a vacuum pump from the 18th century.

Lori: It’s a scientific instrument.  It creates a vacuum inside a globe, so it sucks all the oxygen out so you can do experiments by putting things inside and seeing what the lack of oxygen does to them.

Lori: George Wythe was very interested in science and nature, and he liked that sort of thing. We used to have that in his study. Everyone was fascinated with it.

Lloyd: You must have studied something about George Wythe, or you wouldn’t know that.

Lori:  With our trainingâ€¦for each building we get trained for, we get a couple of days, about a week, where we’re just studying.  We are just learning about that person, learning about their house, how it relates to the revolutionary storyâ€¦so we learned a lot about George Wythe when we were trained for the house. They know quite a bit about him, so he was easy to learn about.

Lloyd: How did you train for “Crime and Punishment?”

Lori:  Well, it was a new tour, so we were kind of developing it as we did it. We learned a lot aboutâ€¦we had some of our managers in the Courthouse and Capitol come in and talk to us about crime and punishment in the 18th century, and give us different cases from the Virginia Gazette, which was the newspaper from the time where they have runaway ads and they list crimes, and they list what was going on at the court, so we used a lot of that to develop that tour.

Lloyd: Now on that one are children involved?

Lori: Hopefully not. It’s a very dramatic tour; it’s slightly graphic, with graphic descriptions of punishments, so we don’t encourage children to come on that one. I’ve only done the tour one once, and my first tour was with a school group of ninth graders â€“who loved it. So, ninth graders do pretty well, but they’re a little bit older.

Lloyd: What was their reaction? Did they want to know more aboutâ€¦

Lori:  They hadn’t been in Williamsburg much at all, that was their only experience here in Williamsburg, so they were just fascinated with everything. They had so many wonderful questions about the entire town. They just wanted to know a lot more.

Lloyd: What were some of the questions?

Lori: They asked about my clothesâ€¦they were here at night, so they did ask about “are the buildings haunted here in town?” They wanted to know just everything. I got every question imaginable, “Did they dance back then?” “What was that building used for?” “Are there graveyards here in town?” Just a lot of different, really good questions. I wish I had been able to spend more time with them.

Lloyd:  Do you want to do the tour again?

Lori: Yes, I’m looking forward to it. That was my first time, so you always want to do it a few more times, so you can learn what people want to hear about it.

Lloyd: You said something about legends, a tour on legends?

Lori: Legends is ghosts, myths, and mysteries, so it’s 18th-century story telling. And, we lead people around town and take them into the buildings where they meet a character from the 18th century, who is telling them a story â€“ maybe a story that was just told at that time, or maybe a true story from the newspaper. Some are funny, some are with ghosts, some are scary, some are just really strange. They listen to that character, and then I take them back out and help them tie it to what we know today and give them a context for it.

Lloyd: The ninth grade kids who ask you if the houses were haunted, do you go into some of your myths?

Lloyd: Any good ones?

Lori: Well, I saw something once a couple of weeks ago that I’m really not certain about. I thought I saw a face in a window while I was leading the tour. Clearly everyone in my group thought it was part of the tour, but I really thought I saw something in the window, so that’s been my favorite thing to tell.

Lori: It’s nice when you can relate it to yourself, because they want to know did you see anythingâ€¦yeah, you’re saying some other employee years ago said they saw something in the middle of the street, but they want to know have you seen anything, so that’s why I like to tell it, because I can say, “Yes I did â€“ just last week.” So, it’s nice to do.

in Buildings and Sites, Health & Life | No comments