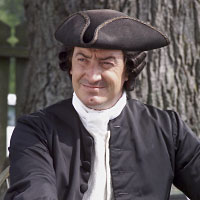 Lloyd:  How long have you been doing that?

Richard Schumann:  I’ve been at Colonial Williamsburg for 10 years, and I’ve been exclusively portraying Mr. Henry for these last seven years.

Lloyd: What did you do before?

Richard: Before, with Colonial Williamsburg, I was with theatrical interpretation. I’ve always had an interest in theatre anyway, and I thought it might be most enjoyable to talk about the importance of theatre in the 18th century before TV, movies, and that sort of thing. And then we’d also follow up a little talk like that with scenes from popular 18th-century comedies. Lot of fun â€“ the 18th century is rich in comedy.

Lloyd: Somewhere I have read that the first real theatre in America was in colonial Williamsburg.

Richard: Well, they performed tragedies, too, and every once in a while we’d do a scene which was tragical in its nature, but the people who are coming to Williamsburg generally want to be entertained in a happy way, and not so much in a very melodramatic, tragic way. And, there was a different acting style in the 18th century than we see today on television, for example, and it got [to be] a bit much doing tragedies.

Lloyd: As Patrick Henry, how do you entertain them now?

Richard: Well, my typical day has me speaking anywhere from one to four different times doing a public audience. The location might be in the gardens at the Governor’s Palace, it might be in one of our two theatres that we have here, sometimes in the Capitol building.  And, people come, knowing my name, Patrick Henry. And, so I talk first about the news of the day â€“ that is, what’s happening in town, and well, right now, we’re doing 1774. What’s the buzz? What are the people in this town talking about? So, I talk about that, and then I open it up to questions and answers. And, anything goes with the Q&A.

So, how do I make it entertaining?  Well, I use the language of the period. That sort of has a way of bringing people back into this time machine. But I also have some jokes that I tell, certainly in character. And, I always sort of fit them in, in such a way that people are amused. It keeps their interest and their attention, and many have come to me afterwards and said, “You know, I really felt like I was in the 18th century for a moment there.” And, that’s what I try to do all the time.

Lloyd: You said in the Q&A anything goes. Who asks the tougher questions â€“ adults or children?

Richard: Oh, children. Absolutely. A lot of them come already knowing that Patrick Henry has a great number of children, for example. At the end of his life, 17 â€“ “Name them.” (Laughs.)

But, I’ll never forget this. One day, I was going on about you know how the people of America should no longer think of themselves as colonies of a distant empire now grown corrupt and tyrannical. And the first hand I saw raised came from a girl who couldn’t have been any more than four, maybe five years old. And she says in this meek little voice â€“ and this is in a packed house. There were about 450 people who were all there, mostly adults, and she says, “Mr. Henry, are you proud to be an American?” You could sense everyone’s heart just ripping out of their chests. A great question.

Lloyd: I will take it that you handled that adequately.

Richard: I believe I did.

Lloyd:  You and Thomas Jefferson occasionally get into it. How does that work?

Richard: I do have aâ€¦well we’ve got three different debates that we’ve done over the last several years. Here at Williamsburg, every April is religion month. Thomas Jefferson and Patrick Henry had very differing views regarding the nature of religion in society. And so we bring our different views before the people. In the end, in fact, let them   decide which way would be the best way.

And, I have a wonderful working relationship with Bill Barker, who portrays Thomas Jefferson, so we’re getting in a lot of little digs at each other â€“ it just adds to the entertainment value. Not only are we putting forth information and true history â€“ the debate of the 1770s and 80s â€“ but we also throw a little bit of amusing jabs in there, from time to time; sparks fly sometimes.  We also debate whether this federal system of government is a good idea or no. Mr. Jefferson likes it. I don’t. And last year, yes, last year, during election year, we were debating the election of 1796, which people found fascinating because of the remarkable similarities in politics of yesteryear and politics of today.

Richard: Absolutely right!  I think part of the biggest research I do now is not reading about Patrick Henry. I think I’ve read all of that. But it’s keeping abreast of current events, because if we don’t make the 18th century relevant to the 21st century, then we’re not doing our job. You know the motto, the slogan of Colonial Williamsburg is “That the future may learn from the past.” And, that’s where Mr. Henry comes in gangbusters.

Lloyd:  I guess you said you had already read that. How long did it take you to learn Patrick Henry’s life, to learn to interpret Patrick Henry?

Richard: Well, I’ve been portraying Mr. Henry for seven years, and I’m still learning. Again, I think I’ve read everything, all the biographies that have been written since the time of his death through these 200 years. But now that I’ve gotten to know all of that, I have to get to know his friends. So, I also am given to study Richard Henry Lee. I am presently working on him. John Adams. George Mason. These are Mr. Henry’s friends, and I’ve got to know them, too.

Lloyd: Was Adams a friend of Henry?

Richard: Yes, they hit it off real well at the first session of the Grand Congressâ€¦spent a lot of time togetherâ€¦had a lot in common. After meeting John Adams for the first time, Henry described him as, and I quote, “my kindred spirit.”

Lloyd: That does not sound like the John Adams I know.

Richard: Oh yes, I know what you mean. John Adams was almost proud of being obnoxious and disliked, by even his own family. But then, that is something else they shared in common. There were a lot of people who weren’t too fond of Mr. Henry, either. (Laughs.)

Lloyd: I guess they had that in common. If you don’t want to answer this, you don’t have to, I’m just curious, do you ever get tired of being Mr. Henry?

Richard: No, I don’t. Again, I think that Mr. Henry speaks better than anyone else to the times of today. He is a fascinating individual, a very principled and virtuous man. And, I have come to really, really love him â€“ truly.

So that things don’t get stale, I don’t just say the same speech, if you will, every day, I mix it up. That’s why I’m constantly looking for new things, not only current events and their relevance to the 18th century, but I like to find little amusing stories or anecdotes about people that were somehow tied in to Mr. Henry. I might throw out a Ben Franklin story, for example. And, I keep it fresh for me that way, and so it translates to the people. My audiences can sense that I am not bored, or tired of this same old thing, because I mix it up.

Richard: Ohâ€¦ well there’s certainly the nature of his character as compared to Mr. Henry’s. Mr. Henry is a devout orthodox Christian. He is most abstemious as to spirituous drink, and other earthly pursuits. Dr. Franklin is believed already to have embraced the deistical philosophy and that to Henry is just another word for vice and depravity. And Dr. Franklin is quite fond of all those earthly pleasures, quite the randy fellow, so I like to speculate as to what their time in Philadelphia was like together at the second session of the Grand Congress. But there are certain tales that Dr. Franklin has published in many of his almanacs, and they’re just hysterical, some of them, so I’ll relate some of those stories.

Lloyd: Talking about Henry now, as you have studied him, he seems a brilliant orator, and rather a person you would not really want to be around too terribly much.

Richard:  That is a curious thing. There’s a story told by St. George Tucker, who as a young man here in Williamsburg, he was the commissary for the military, the Virginia army. He had the responsibility of buying provisions for the army. He also had to get the governor’s signature on the receipts. So, in his diary one night he writes that he’d gone to visit Governor Henry, and Governor Henry was the meanest, most brusque man he’d ever met. First of all, he took a real long time to even acknowledge St. George Tucker in his presence. And finally, St. George Tucker, after clearing his throat a number of times to get Governor Henry’s attention, puts down the receipts and says, “Here sir, these require your signature.”

Henry very abruptly looked at them, threw them down on the desk, and said “You paid too much!” and went back to writing his letter, or whatever he was doing. Well, St. George Tucker was not used to being treated this way by anyone. He was a gentleman. And that night in his diary, he writes, “Mr. Henry looks as though he’s a man who never smiled nor told a jest in all his life.”

Well, a few weeks later there’s the celebration at the governor’s palace for the battle of Saratoga â€“ a great victory, the news had just come in, and Governor Henry decided to have a big party for the whole city.   St. George Tucker was there. And he saw Governor Henry â€“ a different Governor Henry â€“ in action, dancing and being very gracious, and very kind, and laughing.  And that night in his diary, he wrote this, “I’ve never seen a more socially affable man in all of my days.”

Mr. Henry wasâ€¦it’s not like he was bipolar or anything, but he was a man who was very focused on business, and when it was time for pleasure, why there was that side of him, too, but when things are business, he’s quite stern.

Lloyd: Do you portray that?

Richard: Oh absolutely, even when I throw out my subtle jokes that bring sometimes knee-slapping guffaws, I do not allow myself to smile.