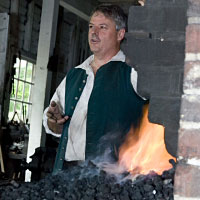 Lloyd Dobyns: Hi, welcome to Colonial Williamsburg: Past & Present. The stuff is new and you won’t hear it anyplace else. This is Behind the Scenes, where we let you meet the people who work here. That’s my job. I’m Lloyd Dobyns, and mostly I ask questions. This time I’m asking Ken Schwarz, and at Colonial Williamsburg he’s a blacksmith.

Lloyd: What does a blacksmith do at Colonial Williamsburg?

Ken Schwarz:  Blacksmiths work with iron and steel, so with those raw materials and a fire, we use the fire to soften iron and steel and a hammer and an anvil to hammer the material into useful shapes.

Ken: Horseshoeing was sometimes part of the blacksmith’s business, but in an urban setting like Williamsburg, you find that as a specialized trade â€“ a farrier’s trade. In rural area, it wouldn’t be uncommon for a blacksmith to include horseshoes as part of the work.

Lloyd: How many blacksmiths are there?

Ken: Within our shop, we’ve got five full-time blacksmiths. Within the United States, there are probably thousands â€“ many of them doing the work as a hobby. The professionals in the blacksmithing world probably number about one hundred.

Lloyd: As a hobby, let’s seeâ€¦you’ve got a fire, so you’re hot all of the time, except in the winter when you’d be cold because the fire isn’t big enough. That doesn’t sound like a very nice hobby. (Laughs)

Ken: (Laughs) I think a lot of people that work in offices and at desks really feel the need to do something physical and creative in a material way. To interact with a material like iron and see a physical result of their efforts has become very popular as a hobby in recent years.

Lloyd: I imagine it would be quite noisy.

Ken: It can be. There are certain types of anvils that produce more noise than others. So an anvil that’s made completely out of steel that has been forged or cast has a high pitched ring to it which makes a lot of noise. But there are also anvils that are made out of cast iron that have a “thud” when you hit them, so they’re not nearly as noisy.

Lloyd: You’re working in an 18th century forge, so which one do you have?

Ken: We have a forged steel anvil.

Ken: It is rather noisy. It’s interesting to see this large industrial building in the heart of what you’d think of as a residential area in the capital city of Williamsburg. The shop is literally right off the main street, behind the workman’s house.

Lloyd: What question, or questions, do you get mostly?

Ken: The first obvious questions are about what’s happening right at the moment. What’s he working on? What is that thing over there? The nature of question has changed over the years. The questions we used to get all the time related to horseshoes, because most people associated horseshoeing with blacksmiths work. Recent Hollywood releases have changed the nature of the question. They show blacksmiths doing different activities. Those that appeal to kids primarily involve work on weapons. So the biggest question we’re getting nowadays is about sword making.

Lloyd: Are you making swords?

Ken: We don’t currently. Most of our work relates to the peacetime operation of a blacksmith shop. But the Anderson Shop here at Colonial Williamsburg was an armory during the Revolutionary War, so swords were part of the mix. As we look to the future, we’re looking at talking more and more about the war effort, and we’ll hopefully be including gun work and sword work in that.

Lloyd: As people stand there and watch you, do they ever comment on the dreadful conditions â€“ the heat, the sweat, the dirt, and the things that you’re whacking at with your anvil?

Ken: Yes, they often comment on the physical nature of the work, especially in either extreme. When it’s really, really hot, they always comment that they bet we like the wintertime. Wintertime has its own challenges. We have a fire there, and most people think that the fire would heat up the entire building. But most off the heat goes right up the chimney. So in the wintertime it’s extremely cold in the shop and in the summertime it’s extremely hot. Spring and fall are really the best times to do the work.

Lloyd: You said it’s really cold. Does that change the nature of the metal you’re working on?

Ken: It does. When the temperatures drop well below freezing, the anvils get cold at night, and so the next day when we come into work we’re pulling hot iron out of the fire into a room that might be 30 or 35 degrees and holding it against an anvil that might be 25 degrees. The anvil acts as a heat sink and draws the heat out of the iron. You have to work a little more quickly in the winter than you do in the summer.

Lloyd: What attracted you to blacksmithing?

Ken:  I had a chance to try blacksmiths work when I was in high school and I fell in love with it immediately. I began working for the smith that taught the first class that I took, and in the meantime I set up my own workshop. I ran a business as a blacksmith right out of high school. My real interest was in historical restoration work. I loved early technology. I loved the early style of American ironwork. I loved the utilitarian nature of the objects that were being made. I focused primarily on restoration ironwork. I worked for building contractors â€“ in my home â€“ that were restoring old buildings. Through that interest in historical ironwork, I met up with smiths that work here at Williamsburg and I joined the crew here in the early 1980s.

Lloyd: You said “in high school” and then you said “the man who taught.” Was there a high school class?

Ken: The class was actually in a museum, a small county-run museum. They were looking for volunteers in the museum, and one of the ways they attracted people was to teach classes. In exchange for the class, you were to volunteer at the museum several days a month. I took the class and I enjoyed it immensely. They had no problems encouraging me to volunteer within the shop. Once I got my own set-up, I’d go to school during the day and I’d work on my homework in the evening. Weekends and holidays I was in the shop, hammering away.

Lloyd: What were some of the things that you made for the builders?

Ken:  As buildings were being restored, often what would happen is that the contractor would find an original hinge or original set of hinges and the people that owned the house would want other hardware made to match the original, so that all the hinges within the house would be similar in style. Hinges, door latchesâ€¦also at that time in the late 1970sâ€¦woodstoves and fireplaces were making a comeback. I did a lot of fireplace equipment. It was primarily building hardware, fireplace equipment, and occasionally odd tools or objects like that.

Lloyd: I don’t mean to get too personal in your life, but can a guy make a living like that?

Ken: He can. It’s hard to break into the industry because it takes a long time to really develop the skills. You can make a living at it â€“ you can make a good living â€“ if you’re a good smith. It just takes years to develop the skills. Just like someone who is a musician and wanting to break into that industry. It takes years and years of hard work to develop and refine your skills, and as long as you can support yourself during those learning years, the payoff comes later on.

Lloyd: Was there an apprentice in blacksmithing? Could you apprentice out?

Ken: In the 18th century, that was the case. That’s the way most hand skills were taught. As a minor, in your mid-teens, you would sign an indenture which binds you to a particular business until you turn 21. For that five or six years, you work within the business, you learn the basics of the trade, you learn how to operate the business. Once you turn 21, then you’re free to go out and earn wages. In the modern world, it’s a little more complex than that. Federal labor laws require payment of a minimum wage, limiting teenage access to industrial sites make it much more difficult to learn. So today the trade is usually taught through craft schools that offer week-long or a sometimes little bit longer courses. You have to have the discipline to set up the shop and practice on your own.

Lloyd: So the five blacksmiths at Anderson Forge are all blacksmiths? There are no apprenticeships?

Ken: Well, we do have an apprenticeship within the shop, also. It’s one of the few formal opportunities for an apprenticeship. Typically when I hire somebody into the shop, I look for somebody who already has background in the trade. The training that we do then relates specifically to 18th-century technology and 18th-century form. If I bring somebody into the shop who has already got a background in working with hot iron and fire so that they know the fundamentals, I can then re-align their skills to 18th-century forms.

Lloyd: Is it much different?

Ken: Much different from the period?

Ken: It is in that we’re a museum, so there are many distractions that go along with the learning. We have many guests that come into the shop, and we welcome them, but at the same time it slows down the learning process.

Lloyd: Is it a popular place?

Ken: It is popular, yes. We keep it popular by maintaining a very active shop. We try to always have forge work going on. People really love seeing the fire and the hot iron and we use that to teach them more about American history.

Lloyd: (Laughs) You left out the noise.

Lloyd: That’s Colonial Williamsburg: Past and Present this time. Check history.org often. We’ll post more for you to download and hear.