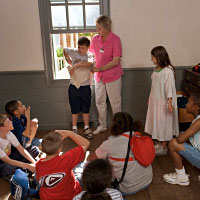 Dawn Lunn has learned to expect the unexpected as she guides school groups through Colonial Williamsburg’s Historic Area.

Lloyd Dobyns: Hi! Welcome to Colonial Williamsburg: Past & Present. The stuff is new, and you won’t hear it any place else. This is “Behind the Scenes,” where we let you meet the people who work here. I’m Lloyd Dobyns, and mostly I ask questions. This time I’m asking Dawn Lunn who works with school groups â€“ a group interpreter. The first question obviously is “What does a group interpreter do?”

Dawn Lunn: I lead tours of groups of 25 children around the Historic Area, and I show them a little bit of everything â€“ in just three hours.

Lloyd: And you obviously have not yet gone insane. How long have you been doing this?

Lloyd: Oh, my.  That, to me, would be just a terrible job. I don’t really like kids that much. Obviously you must have made some accommodation that [allows] you to deal with them.

Dawn: I love kids. They are honest. It’s fun. I don’t think I have to make any accommodation, because they’re just a ball. They’ll ask you any questions. We play. We do 18th-century games, and we sneak in all the history that we can. So, it’s a lot of fun for me, too.

Lloyd: What sort of questions do they ask?

Dawn: They ask anything from personal questions about Thomas Jefferson, “Did he wear a wig?” to bathroom facility situations. You get everything from kids. They’re real “up front.”

Lloyd: Have you ever worked with adults?

Dawn: Yes, I work with adults, too, but mostly children.

Lloyd: I was going to say, which is more fun?

Lloyd: I can’tâ€¦ there’sâ€¦ you have to know everything about everything. For instance, “Did Thomas Jefferson wear a wig?”

Lloyd: There’s no way you can really prepare for that. It’s just a matter of experience.

Dawn: Well, the training so is extensive. The basic training for group interpreters is 12 weeks, 40 hours a week; and they cover virtually everything. So, we are like the jacks-of-all-trades in the Historic Area. We know a little bit about everything, and if you don’t know, you know who to ask, which is really important.

Lloyd: I guess with the kids, there’s no way you can’t slough off a question. You couldn’t say, “I don’t know that, kid. Leave me alone.”

Dawn: Actually, every single day I have to say “I don’t know” to something. (Laughs) Because I don’t think anyone knows everything. But, like I said, we know who to ask. We know the experts in every building and in every trade, and if they are really curious, we can even email them later, and tell them the answer to their question, and we do, we do that from time to time.

Lloyd: You go to that much trouble just to be sure that there is an answer?

Lloyd: That is a lot of work!

Dawn: But it’s fun. But it keeps us on our toes, and we get to walk through the whole Historic Area, so we stay in good shape.

Lloyd: How many tours do you do?

Dawn: Two three-hour tours a day. Especially this time of year â€“ in May â€“ is a very busy time for us.

Lloyd: So, for six hours every day you are walking!

Lloyd: Group leaders, group instructors, and interpreters have to be in the best physical shape of anybody.

Lloyd:  You obviously have fun doing this. Is there any part of it that you don’t like, that’s sort of trying for you? Have you ever had a child who is just rotten?

Dawn: Personally, I’m really good at drawing out good things. I know some of my friends have had some really bad experiences, but I’ve been really lucky. I do a lot of hands-on things, and I’m very interactive so that I them on their toes. I’m constantly moving, and I’m really good at reading a group, their body language and everything, so I know where I stand with them almost instantly, and I know what to do with them.

Lloyd: You say “a lot of hands-on things.” Such as?

Dawn: We draw water from the well. We play games. And just this morning I was doing a dry run of a cannon shooting with a group from Denver, Colorado.

Dawn: We don’t use gunpowder. We just go through the steps, so the kids know what it was like. That’s one of my favorite things to do.

Lloyd: It sounds like kids would really get a kick out of that.

Dawn: Yes, it’s fun. And then I time them. Today was my all-time record of 38 seconds, and they did all the steps. They were excellent. From Denver.

Lloyd: Okay. What else would you do with them? I am having a hard time imagining three hours with 25 children walking around Colonial Williamsburg.

Dawn: Well, we teach them colonial manners. We take them through the Capitol building and do court trials and vote for independence. We lock them in the jail, of course, and take them to different trade sites and show them buildings and all kinds of stuff. We give them the whole town in a nut-shell.

Dawn: The kids think it’s really cool and the teachers always comment, “Let’s just leave them in there and go to lunch.” We can’t really do thatâ€¦it’s like a running joke.

Lloyd: 25 kids! How much help do you have? How many teachers, generally speaking, with 25?

Dawn: A minimum of one, but sometimes it’s up to 50 percent adults with their kids. Different schools have different rules as far as how they organize their school trips and how many adults have to be there. But there’s at least one adult with us.

Lloyd: Yes. You just couldn’t keep your eye on 25 children the whole time. It would be impossible. Actually, from your description of it, there’s more to do walking around than you would think. Who got the idea of drawing water from a well? That would never have occurred to me.

Dawn: I don’t know whose idea it was, but we have a man who is totally focused on that. His name is Jim Hollins. He actually went out and measured how deep it was and got all kinds of statistics and history about the well. So we can do a little more than just draw water from the well. We can tell them all about it â€“ the temperature and everything.

Lloyd: How deep does a well have to be?

Dawn: In Williamsburg, you hit water around 20 feet.

Dawn: You couldn’t drink it today, but they used it for cooking purposes back then.

Lloyd: Have you ever had a child just decline to doâ€¦ just say no, he doesn’t want to do that, he wants to stand there and do nothing?

Dawn: Sure! We just let him. Unless the teacher has a rule, we really work with the kids. We don’t want to embarrass anybody or single them out, or anything like that.

Lloyd: Well, you have to be something of a psychologist and educator and historian â€“ all sorts of stuff. It’s a demanding job, but clearly you like it.

Dawn: Fortunately, I’m a mom, so I pretty much know the next move of a kid â€“ what it’s going to be. They don’t get anything over on me. So, that’s my advantage.

Lloyd: I hadn’t thought of using your motherhood experience as part of the exhibit, but it is.

Lloyd: How many children do you have?

Lloyd: And their ages?

Lloyd: So it’s past experience with you. You’ve got the history down pat.

Dawn: I know all the age levels and how they’ll act. 12-year-old girls will giggle for a period of two years.

Dawn: And it doesn’t stop. It’s very interesting. Expect that when they come.

Lloyd: What are the ages of your groups?

Dawn: We start them in kindergarten on a tour called “The Mother Goose Tour,” where I get to be Mother Goose. We do nursery rhymes throughout the Historic Area. And we go all the way up through college.

Lloyd: Where you don’t do nursery rhymes!

Dawn: No more nursery rhymes. We get into more hard core laws and situations like that, and more important history, that kind of thing.

Lloyd:  And that, too, you learn all that in your 12 weeks of orientation.

Dawn: Well, not all of it [but] as much as they can fit into 12 weeks. For specialized tours there is additional training. For Mother Goose, if you don’t know your nursery rhymes, you go through a little more training.

Dawn: You’d be surprised. They are everywhere you can find them, like “Jack be Nimble.” We have candlesticks everywhere.

Dawn: “Little Boy Blue.” We have hay for the horses in the stables. We take the them in there and talk about Little Boy Blue. In the kitchens, we have patty pans and we can do “Patty Cake.” We can be creative, but we do have a basic outline with the rhymes.

Lloyd: Do you have 25 children for the kindergarten tour? Or fewer Children?

Dawn: Usually they have a few more chaperones. It’s a 25 total with a child-adult mix.

Lloyd: So they wouldn’t give you 24 kindergarteners and one teacher?

Dawn: Actually, when they are young, at that age more of the parents want to go on that trip.

Lloyd: So you have volunteer parents coming forth.

Lloyd: Where is the . . . I’m not sure I should ask you, but I’ll ask you anyway. Of the ages â€“ kindergarten through college â€“ which is the most fun to take?

Dawn: For me, it’s the fifth graders.