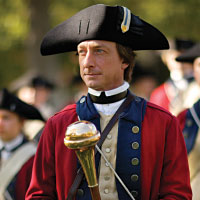 A passion for the music and a love of history motivate Lance Pedigo to work with young people entering the Fifes and Drums of Colonial Williamsburg.

Lloyd: Hi, welcome to Colonial Williamsburg: Past & Present. This stuff is new and you won’t hear it anyplace else. We want to take you Behind the Scenes and let you meet the people who work here. That’s my job. I’m Lloyd Dobyns, and I mostly ask questions. This time I’m asking Lance Pedigo who is the drum major of Colonial Williamsburg’s Fifes and Drums.

Lloyd: The first thing I have to ask isâ€¦why is there a Fifes and Drums Corps?

Lloyd: I never knew that. Yes! So it’s a communications thing?

Lloyd: I always thought it was ceremonial. Clearly I’m wrong.

Lance: Well, ceremony is definitely a part. We also have the morale issue of playing familiar tunes for the soldiers to keep them happy on the march. Basically, your whole day could be regulated by the fife and drum. We draw kids from the local community and have a bigger presence than would have been here in the 18th century. But we use that presence to uplift the spirits of Colonial Williamsburg.

Lloyd: That raises the question of where do you get fifers and drummers? It’s not like they’re standing on every corner.

Lance: They do need to live in the local area, the Williamsburg area, because we do perform year round. Parents sign on their kids at five years old to be on the waiting list. It’s just from the reputation of our program that has allowed that to be. At ten years old they come in not having had any prior experience and we use peer teaching where the older kids are teaching younger kids. We have three full-time staff â€“ adults â€“ that teach them and supervise the program. They work themselves up through rank. It’s set up on a military system. They go right through the senior corps and graduate at 18 years old.

Lloyd: Members of the group are 18 and under?

Lance: Five years oldâ€¦for the possibility that they’ll want to do this and they are ready to make the commitment. It’s an absolutely huge commitment for the kids.

Lance: At 11 years old you’re spending Wednesday afternoons after school with us, from about 4:00 to 6:00. And you’re spending Saturdays from roughly 9:30 to 1:30. The assignments that need to be practiced should be done daily at home.

Lloyd: How hard is it to learn to play a fife?

Lance: I must say the learning curve on the fife is harder than the drum, initially. Just to make that sound out of the fife. Once you get it you can progress quickly. The main thing is marching and playing the instrument at the same time. (Laughs).

Lloyd: (Laughs) Like walking and chewing gum at the same time?

Lloyd: How many young men do you have at a time?

Lance: We have two full-sized groups, there’s a junior group and a senior group. Each has about 35 members. Each of those groups will perform two to three times a week. Then we have smaller subsets of that group to play for special events. For example, if you are visiting with your company and staying at one of our hotels and you want to go to a tavern one evening, you may want the Fifes and Drums group, four or five drummers, to lead you to dinner. That actually has historical precedence for making a dinner call.

Lloyd: What’s the difference between the junior group and the senior group?

Lance: The junior group represents militia field musicians from about 1775, prior to the war for American independence. They are wearing the hunting frocks and the civilian clothes that would have been worn prior to an organized army and an organized uniform. Our senior corps represents the state garrison regiment, which was raised by an active assembly here at the Capitol building in 1778. They are wearing the red regimentals, the formal dress. One of the first things that people sometimes mistake us for are British soldiers. It is the red uniform. They say, “Here come the lobster backs.” But that’s not the case. The red coats were the opposite color of the infantry that these musicians played for. This helped ensure their safety on the battlefield; they were truly noncombatants.

Lloyd: There really was a fife and drum corps?

Lance: Yes, it was known as field music. They would mass together to play for ceremonies throughout the day for the regiment.

Lloyd: What are some of the ceremonies you play for?

Lance: We have Reveille to wake the men up in the morning; we play Inspection, which would take place at some point throughout the day to inspect the condition of the troops and to make sure they are ready; Retreat (not what we think of as “running away from the enemy”) was the end of the soldier’s work day and that usually coincided with sunset; and Tattoo, which is basically a “lights out” ceremony that today is known as Taps. We replicate not all those ceremonies, but throughout the year we’ll do various portions of those ceremonies for the guests of Colonial Williamsburg.

Lloyd: Do the guests ever talk to the Fifes and Drums members?

Lance: We try to allow that opportunity. We do have a program that is more interactive. We always encourage guests to come up and ask questions. The fifers and drummers are more than willing to share their enthusiasm about what they are doing.

Lloyd: So you really have to train them in history and music?

Lance: That’s exactly right. They get that training through performing in the Historic Area and being trained by their peers.

Lloyd: What sort of things do people ask them?

Lance: (Laughs) Are you hot in those clothes?

Lloyd: (Laughs) Are you hot in those clothes?

Lance: The typical answer is they are natural fibers so they breathe very well. But obviously a wool coat in 90-degree summer heat, you’re going to be a little warm. They are interested in how old fifers and drummers would have been in the 18th century. We have references to 12 and 13 year olds playing in the army. Every able-bodied man between 16 and 60, depending on which militia law was in effect at the time, was required to bear arms. But obviously if you had skilled fifers and drummers they are going to carry on that tradition past that age of 16 and 18.

Lloyd: So even to the degree of the people who serve, you try to make it as accurate as you can.

Lance: Yes. Exactly. We’re trying to provide about the same age group that would have been depicted in the 18th century.

Lloyd: That’s interesting. Why is it harder to learn the fife than it is the drum?

Lance: It’s a strange embrasure. The blowing acrossâ€¦it’s similar to blowing across a bottle to make a sound out of that. You have to make that air stream very tight and compacted and forceful to get those sounds out of the fife. And you have to roll it back and forth to get that tone. The fife has no keys on it. Some people know what a modern flute looks like where you have lots of external keys on it. This is just six holes in the fife where you place your fingers on and blowhole. It’s a simple instrument, but to be able to play through the entire range you have to have some dexterity and cross-fingering patterns that you have to use. It’s pretty complicated.

Lloyd: And you say a boy of about ten will learn this?

Lance: They are required to practice a lot. Our highest-ranking members are teaching those younger members. They are highly skilled. The drummers are relying on the teaching methods that would have been used back in the 18th century. There would not have been a lot of drum music available to the musician back then. Fife music, lots of it. Lots of collections. Drum music, no. They had rudiments â€“ seven, parididdle, flam, ratamaque and all of those rudiments transfer to what it sounds like to play. Ratamaque is a pattern that you play. We can tell the drummers the patterns we want them to play. Seven, parididdle, flam, flam, flam.

Lloyd: Parididdle I like. Flam, flam, flam has a certain charm to it. I guess after they practice enough and work together, they figure out what each other is going to do. If everybody is doing his own thing, that wouldn’t work at all.

Lance: No, we’re not marching to your own drummer. We’re definitely playing as a group. That’s the whole lesson hereâ€¦ensemble playing, playing together. Matching the sticking, matching the tempo and the speed because we need to be one, unified unit marching down the street.

Lloyd: Guests like to see that, don’t they? I have seen the Fifes and Drums playing and guests stand around and stare.

Lance: (Laughs) It’s amazing. They come out of the woodwork, so to speak, of all the buildings. Marching down the Duke of Gloucester Street is very exciting. We do generally attract huge crowd and they’ll start to follow us down the street and they’ll fall right in marching down the street. You were asking about asking the fifers and drummers questions, is there a chance for that? At the end, when we dismiss, there’s a chance the guests can come up and talk to usâ€¦say helloâ€¦and get a picture taken.

Lloyd: Oh, I hadn’t thought about that.

Lloyd: They would love that, with the red jackets. I may go do that myself.