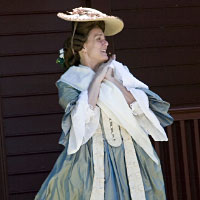 In the pursuit of American independence, Betty Randolph played the role of lady and wife, enabling husband Peyton to fight for freedom.

Lloyd: The Randolphs were one of the first families of Virginia.

Carolyn Wilson: Indeed they were. Actually, the Randolph families that we interpret were the ones who were the descendants of Sir John Randolph, the only Virginian knighted by the crown.

Lloyd: That I didn’t know.

Carolyn: In a way, they are descendants of some proud Virginians, not necessarily nobles, but titled.

Lloyd: Was the family united behind American independence even though they were descendants from the titled?

Carolyn: I don’t think anyone, even in individual opinion, was united. The family certainly wasn’t. It’s actually a tragic story. When you think of the American Revolution, you think of the “good guys” and the “bad guys.” Those who wish for independence and those who insist on imposing tyranny.

In the Randolph family, it’s much more complicated than that, just like the whole story is more complicated than that. They are loyal to the crown, obviously, that’s where their fortune and entire livelihood came from. But when it gets down to actually making a decision as to “Who will govern me, who will control me?” the Randolph men have a decided split. One of them is very much in favor of supporting the king; the other one, while he’s not against supporting the king, is not supporting Parliament in any way. That’s where the break begins. It’s very slight. It’s not that they are at each other’s throats all the time, it’s that they don’t agree about the way that they are going about things. It’s not about freedom or liberty&ndashthose words are far too grand. They are actually more against the method of which they discuss these matters.

Lloyd: My brother and I, when we disagree, simply don’t speak about it. Did that occur to the Randolphs?

Carolyn: (Laughs) I have no idea, but I’m afraid that we have to play that they do speak about it because that’s what we do here. John Randolph, who goes down in history as being known as John “The Tory,” speaks frequently and loudly on his opinions&ndashthat if you are going against civilization, you’re going against your loyalties; that if you’re going against the greatest empire in the world, then you are a traitor. You have no reasonable sense of understanding of how civilization operates. You must have order. You must have those who obey the laws. If you don’t like the laws, you change the laws. It’s not that his side is actually wrong, it’s that his side is different. That’s the story that we like to tell here. When you think of the American Revolution, you may think it’s clear cut. It’s not. It’s a civil war. The story of the American Revolution as a civil war is played out entirely in the Randolph family. It’s very tragic.

Lloyd: Peyton Randolph, Betty’s husband, was at one time called by the Williamsburg militia, the “Father of His Country,” which sounds very much unlike John.

Carolyn: If you were to hear Jack Flintom [Colonial Williamsburg interpreter], playing John Randolph, he would say my brother is the most popular man in Virginia. He would follow up with by saying I [John Randolph] never sought for any sort of popularity. Taking the higher road, in a way, is his “take” on it. When you speak about your country, you’re speaking of Virginia. He is indeed the highest elected official in Virginia. He’s a man who has a great deal of power with that popularity, and we all know how much power goes with being popular. He’s always the one who is the front of everything. He’s always the one who is in the lead. That’s almost inherited, in a way. The Randolph family has to be there. The son of Sir John naturally would be at the front of everything. The son of Sir John, who’s educated in England as a barrister, the son of Sir John who has a personality that is charismatic and strong and is a good leader and able to bring different sides together to help them serve their countryâ€¦that’s the person Peyton Randolph was. So when the militia welcomes him back in that way, they are honoring him, but in a way they are honoring themselves. This is their government. This is their system. They are proud of him for using his constitutional right to speak his mind, to protect his rights and liberties, to look after the people of Virginia.

Lloyd: The Randolphs were, among other things, quite wealthy. They had slaves. Betty Randolph had domestic help, or slaves.

Lloyd: Do you know how many?

Carolyn: Oh, sure, there were 27. We have a detailed inventory of everything Peyton Randolph possessed. The inventory was taken just after he died. That’s what is needed to probate the will. Twenty-seven slaves in the household with Peyton Randolph, his wife Betty, and their niece Elizabeth Harrison.

Lloyd: Was there any discussion of freedom and liberty and independence while there were 27 slaves in the house?

Carolyn: Isn’t that the irony of it all? As a 21st-century person, that’s one of the hardest things that we portray. It’s hypocritical. It’s wrong. Everything we know about this story is just wrong. But, by the same token, we’re not in the 21st century when we’re in character. We’re in the 18th century and we have to speak with 18th century values.

When we speak of liberty for ourselves, we’re speaking of it in very specific terms. While of course liberty is our lifeblood, we’re not saying that it is necessary for slaves. They are property. They have absolutely no rights&ndashthey have no reason to even consider that liberty is theirs for the taking. The same thing holds true for women, actually. A woman in the 18th century, at least the way I portray her, is one who is accepting of her role. She is given certain perimeters and her duty is to be the best she can be in that role. So Betty Randolph, while she may not be able to vote or hold public office, and she has no political privileges, she has all the rights of a British subject. Liberty isâ€¦ahâ€¦.

Carolyn: In a way, in our perspective, but in the 18th century, that’s not it. They are speaking for everyone, but within the confines of their beliefs. If we free our slaves, and this is the way that I play it in character, I would be doing them a disservice. I would be putting them out in the street where they would be hungry, where they don’t have a roof over their head, where if they are sick, there isn’t anyone to take care of them. That’s the life they enjoy as a slave in one of the most powerful men in Virginia. They live better than the average Virginian.

Lloyd: Really? I guess money is money, whenever you have it.

Carolyn: That’s the truth of it. They are well dressed, they are well fed, and they are cared for when they are infirm. When I make that argument “in character” to people in our time, they are appalled. And they should be. But that’s what I want to draw out from them. I want them to know, absolutely, that slavery is an absolute evil. And I also want them to know why it happened. Because they just let it. Because they accepted it as part of society&ndashit was part of their lifestyle. If Betty Randolph wanted to live in that big house and throw all those parties and have her hair done and be dressed and everything she wanted at her beck and call, she had to own human beings. That’s a tale that’s very hard to tell.

Lloyd: Oh, yeah. On the other hand, you seem to be trying and enjoy trying it. You obviously enjoy your character.

Carolyn: (Laughs). I have the greatest job because I have many important stories to tell and I feel like I’m helpingâ€¦I’m educating. If we didn’t tell the story, we wouldn’t be honoring the people of the past. I’m not talking about the people who are necessarily our nation builders. They receive plenty of honor and, in their own way, they should. What I’m talking about are those people, just like today, that make things happen and who get no credit. If you want to look at it from another perspective, why did Peyton Randolph or any other founding father have the time to do what he did? Especially the Virginian? How on earth would he have the time to pursue natural philosophy, religious philosophy, political philosophy, whatever it is that makes him have these grand notions to stand up against a power that’s greater than anything they could possibly imagine confronting? That’s because there are people behind the scenes. Peyton Randolph has a manservant at his side all of the time. If he needs something he just looks at Johnny and he’ll go fetch it for himâ€¦he hardly has to say anything. Just as his wife. She’s the one who makes the home. She’s the one who makes it ready for him. She’s the one who relieves him of that burden. Everyone plays a role, but not everyone plays a role that is famous.

Lloyd: I was curious about that. I read a book about a year ago and it said that the hardest job at any plantation was the woman who ran it&ndashthe wife of the master. Do you think that Betty Randolph would have agreed with that?

Carolyn: Because she’s a lady. In my interpretation of Betty Randolph, completely made up, but I will say that my mother taught me that a lady’s duty is to see that her home is in good order and that everything about the home is just as it should be. That she knows how to cook and clean, that she knows how to manage servants, to keep household accounts, to see that the household is well supplied, that all of her husband’s entertainments are conducted properly and to put all of the guests at ease. The definition of a true lady isâ€¦she may work from dawn to dusk, but she never looks like it and she would never act like she labors in any way.

Lloyd: That’s Colonial Williamsburg Past and Present this time. Check history.org often. We’ll post more for you to download and hear.