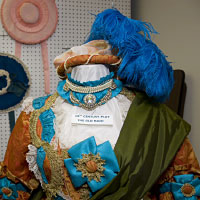 Brenda Rosseau, supervisor of Research and Design at Colonial Williamsburg’s costume center, dresses interpreters in the right clothing “from the skin out.”

Lloyd Dobyns: Hi. Welcome to Colonial Williamsburg: Past & Present. The stuff is new, and you won’t hear it anyplace else. What we want to do at first is get you “Behind the Scenes” and let you meet the people who work here. That’s my job. I’m Lloyd Dobyns, and mostly I ask questions. This time, I am asking Brenda Rosseau, who is supervisor of Research and Design in the Costume Design Center.

Lloyd: You get all the actors dressed.

Brenda: Essentially yes, we call them interpreters. We costume about â€¦I think we have well over 1000 positions that we costume at this point in time. And, that is every strata of society in the 18th century from head to toe and from the skin out.

Lloyd: Do you do any other period other than the 18th century?

Brenda: We do haveâ€¦mainly our target date is around 1775, it’s generally in the third quarter of the 18th century. But we do some special programming, such as the special programming we do before the battle of Yorktown, where we costume 1781 â€“ Washington and his troops. And then we also have special evening programs where we do some earlier things. There is a program called “Cry Witch,” which takes place in 1706, and the clothing is significantly different. And we have another evening program that we costume called “ToGo A’Pirating” which is about a pirate trial that took place here in Williamsburg in 1726. Recently, we just started costuming another program called “Prime Time History Hour,” which is about the Barbary Pirates. We call it the Barbary Pirate Play, since pirate plays seem to be very popular. That takes place in 1803.

Lloyd: How did you learn all this? Obviously you have to know what 1781 does.

Brenda: Right. Actually, I majored in theatrical costume design in college. My background is primarily theatrical before I started working in museums. My first job in museums was about 15 years ago, where I worked for another site, a 17th-century site, and then nine years ago I came to Colonial Williamsburg.

Lloyd: You must study all the time.

Brenda: I’d like to, (laughs) but unfortunately, I don’t have that luxury. We are very busy. I really would like to study all the time, but when I do get to study, we get to look at objectsâ€¦ we get to look at antiques, documentsâ€¦so it is pretty diverse and very interesting.

Lloyd: It just occurred to me, how many of there are you? To do a thousand people?

Brenda: I am the head of research and design, and I’m the primary designer. There are 30 people at the costume design center. We have an operations section which takes care of the day to day maintenance. We have two cutter-fitters who do both men and women, and they will do the initial fittings. We have an issuance department to take care of the 45,000 pieces of clothing that are out there in circulation.

Lloyd: Talk about a big closetâ€¦

Brenda: (Laughs.) Right. And, we have a daily laundry service, which is essentially contracted out, but we do all the daily maintenance. So, it’s a pretty extensive operation.

Lloyd: So, if one of the interpreters got caught on a door and ripped a coat pocket, he has to come back to you.

Brenda: Right, generally what would happen is he would come in to the laundry counter; it would be dropped off to be cleaned, and then when it was checked the next day after it came back from the laundry, we would repair it. We have a pick-up and drop-off service; we have a maintenance service. We provide them with shoes, eyeglasses â€“ everything you need for an 18th-century appearance.

Lloyd: You are worse than a department store.

Brenda: Yes, (laughs) we are actually.

Lloyd: An interpreter couldn’t put his own wallet, for instance, in his pocket, because it’s notâ€¦

Brenda: Well, he could, things that are hidden from the public you can use. Women especially have voluminous hoops where they can hide all manner of things. With men, it’s a little difficult, because the pocketsâ€¦people today â€“ unlike the 18th century â€“ carry all manner of stuff around with them â€“ keys, identification, money, all sorts of things. In the 18th century, that really wasn’t necessary. You didn’t have that much paper or things that you had to carry around with you. So we do have to make accommodations for modern wallets, and purses, and pockets, and things like that, and generally, you can sort of hide a lot of stuff within the clothing.

Lloyd: I think I would be scared I would pull it out at the wrong time.

Lloyd: It seems to me it would just be easierâ€¦ don’t do it. What do people ask you when you are talking about costuming?

Brenda: Primarily, they want to know if it’s hot.

Brenda: Yes, it is hot. And, it is layered, but I think it is what you get used to. I think the problems we have dressing modern people are that today everyone is used to wearing relatively loose clothing, that’s loose fitting. In the 18th century, it was very form fitting. And that takes a little getting used to for most of our interpreters.

The other thing is this idea that clothing today, fashion today has been democratized and globalized, so you can choose to identify yourself in any way, shape, or form you wish if you have the money to do it. It is much more common. Fashion spreads up from the street now rather than trickling down from above. And that is one of the primary differences between dress now and in the 18th century. People have a difficult time grasping that you are identified by your clothing in the 18th century. It is sort of said who you are, what you did, where you came from. That’s not necessarily true any more, because you can choose to dress any way you want. 30 or 40 years ago, you could tell a European from an American. You can’t now just by the way they dress. That’s not necessarily true any longer.

Lloyd: Was that true in the 18th century?

Brenda: Yes, it was true. I think that clothing is a cultural marker in the 18th century. It can also mask who you are. You could change it and alter it to pretend you were somebody you weren’t. In the 18th century, it was pretty clear by how you dressed what your aspirations were, what your social strata you came from, and what you did for a living.

Lloyd: In “The Story of a Patriot” they were all in 18th-century costumes.

Brenda: Well, they were in Hollywood 18th-century costumes (laughs).

Brenda: There were things about those costumes, specifically John Fry â€“ that particular article of clothing I don’t think ever existed in the 18th century. It was modernized, the way the lapels fell on the coat. It was pretty obvious that was done by a costume designer and not by someone who had actually studied 18th-century dress. Some of the things were lovely. There is a suit that Thomas Jefferson wears in the tavern scene that is absolutely perfect. But there is some unevenness there.

You can tell that the film was done in the fifties, by their hairstyles, specifically by the way the women dressed. That’s pretty obvious in a lot of films. You can pretty much tell when period films were doneâ€¦

Lloyd: (Interrupts, laughing.) No, you can pretty much tell. I can’t tell.

Brenda: (Laughs.) Well, a friend of mine once said “If you absolutely want to ruin a period film, take Brenda to the film with you.” (Laughter.) But you can, specifically by the hairstyles, you can probably tell. Even if it were not obvious to you by the clothing styles, the hair always gives it away for some reason.

Lloyd: Why, I wonder?

Brenda: Because people are enamored by their hairstyles. Even if you look at photographs of women here. We have that problem today, because people want to wear their hair down and not up under their caps. But if you look at pictures of interpreters in Colonial Williamsburg in the 50s and 60s, it is very obvious from the little Jackie Kennedy hairstyle and the little doilies they put on top of their head, you can pretty much date when they were done by the hairstyles.

Lloyd: That’s Colonial Williamsburg: Past & Present this time. Check www.history.org often. We’ll post more for you to download and hear