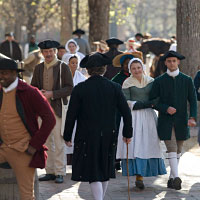 Lloyd Dobyns: Hi. Welcome to Colonial Williamsburg: Past & Present. The stuff is new, and you won’t hear it anyplace else. What we want to take you is “Behind the Scenes” and let you meet the people who work here. That’s my job. I’m Lloyd Dobyns, and mostly I ask questions. This time, I am asking Rose McAphee at Colonial Williamsburg, where she is a training specialist for the department of interpretive training, which means what?

Rose McAphee: Wellâ€¦which means that I help to train the interpreters who come here to Colonial Williamsburg to teach our guests about the colonial life in the third quarter of the 18th century. So, I get to come in contact with the new interpreters as they are just coming in the door and give them what we call introduction to interpretive training, a 10-day course that they take before they even talk to the public.

Lloyd: Did you have to be an interpreter before you were a trainer?

Rose: I didn’t have to be, but I actually was, and I think that helped somewhat because I had an idea of what the interpretive experience is, and I can bring that knowledge to the training. A number of my colleagues were also interpreters, but there are a few that have come straight in to work with us who were teaching in universities, junior colleges, colleges, high schools, things like that as well.

Lloyd: This is a question you probably can’t answer simply. Do interpreters tend to be young?

Rose: Well actually, with Colonial Williamsburg, we get all across the board. We do get a lot of young people that are coming particularly fresh out of college like William & Mary, and places like that. But we also get a lot of people who are retired, who say “I came here with my kids; or I honeymooned here; or I came here on a vacation and always loved it, and I said when I retire I am going back to Colonial Williamsburg.” That’s really nice, because there we get experiences of people who have been former principalsâ€¦ We had one young man who was a chemical engineer and had retired from that job, who said “I wanted to do something totally different,” and we said “This is definitely totally different.” So we get a wide range of folks. We get some teachers, former teachers, some who come work for us just in the summer, or who do part-time work with us. We have a wide, wide range of folks who come to work here.

Lloyd: Who makes the best interpreter? Is there a rule?

Rose: I would think the best interpreters would be people who like people, because you can always learn the history, and that’s where we come in. We help to teach you history, we get you comfortable with presenting it and talking in front of people, but you really have to love people and love history. Then you’ve got half the battle won, I think.

Lloyd: When people come here and they talk to interpreters, basically, what do they want to know?

Rose: Oh my goodness, they want to know what life was like in this area in the colonial time period. They want to know where they would have fit in, what station in life or what area would they have been in. They are very interested in the trades, and how those things work; how you make a silver bowl; what do the blacksmiths do; what do the cabinetmakers do. They are also interested in our character interpretation and people who actually portray people of the past. They really find that fascinating, because they are also stepping back into time. I think others are attracted to just the outdoor history atmosphere. It’s beautiful; it’s an actual town recreated in this 18th-century setting; the people are friendly. Most often they really come just to learn the history and see what life was like, where this America started, if you will.

Lloyd: Do you ever go out on the street and just walk around and listen to the interpreters?

Rose: I sure do, not as much as I would like toâ€¦

Lloyd: It’s just helping them get it right?

Rose: Well, that and getting a feel for the types of things they need out in the field, because that changes from season to season. When it is hot and sticky, there are different challenges than when it is very cold or rainy. When we have school groups â€“ this is our school group season, which we are really excited about because our school group visitation is really growing â€“ how to make sure they have the amenities they need, they can get into the rest rooms and into the restaurants and the taverns, and things like that. But mainly just to see how we can help them transfer the knowledge they get in the training courses to making a great guest experience.

Lloyd: Do you ever get the interpreters asking you how they should answer a specific question they’ve never heard before?

Rose: Yes, in fact, I am doing a project now. We polled our interpreters back in December and again in March to ask them “Have you had situations, sensitive issues, controversial interactions with guests you need some help in how to deal with?” We had very, very good response, and from that we are making a little booklet that will give them some ideas on how to address certain things that may come out of the blue, that we don’t necessarily teach in training. And, it also gives us ideas on what type of training we can develop.

Lloyd: What sort of thing would that be; give me an example.

Rose: For instance, some of our guests are really not sure, for instance, when they see a female working in the trades. They say, “Well, women would have been at home taking care of the kids.” So, we are helping our interpreters to craft an answer to that that would tell our guests that yes, most women did indeed take care of children, that was the woman’s role in the 18th century. But we have evidence of people like Christiana Campbell who ran a tavern, Jane Vobe who also ran a tavern, the Hunter sisters who were milliners. So we can really point to working women. Clementina Rind took over The Virginia Gazette when her husband died. So, we can say typically you would not see a woman in trades, but it is not unheard of. And, we are tying to represent the 18th century as opposed to recreating it. So those are the types of advice we can give our interpreters on how to address that question

Lloyd: So you can actually name names of women who did that in those years.

Lloyd: I knew about the sisters who were milliners, but tavern owner you don’t expect â€“ 18th-century tavern owner. Do people ever just get tired of it â€“ just don’t want to do it any more? Interpreters?

Rose: It all depends if you come in the door with that love of people and that love of history, you always find something to re-energize you. Some folks get into it and realize it is not really for them. You do have to be able to stand for long periods of time, you have to be able to work in all types of weather, and you have to be able to work around dust and mold because some of the buildings are original, so they’re over 200 years old. So there are some people who have challenges that limit their ability to really get the full experience of an interpreter here.

Lloyd: I would never have thought of that â€“ you have to be able to stand for hours. I wouldn’t do that.

Rose: It is hard for some people. It really is.

Lloyd: Have you ever been questioned by a guest who did not believe that the interpretation he or she was being given was an accurate one?

Rose: Oh yes, sometimes, because we (Americans) do have a lot of misconceptions about history. So, yes, there are sometimes when people are not sure for instance about the women in trades. Or, in our trades we do use rare resources as they would have in the 18th century, and some folks are a little uncomfortable with that.

Some are not quite sure when we talk about the issue of slavery. Because our (most people’s) main images (of slavery) are (from the) 19th century. When we talk about the 18th century and the differences, sometimes guests say, “Well they couldn’t read or write,” but that was not until 1832 in Virginia. In the colonial time period, there were some slaves and free blacks who could read and write. So there are some things like that. But once we try to give our interpreters that knowledge â€“ like the names of those women who were actually in trades â€“ to give them actual people, actual incidents, actual 18th-century documents, that they can show to the visitor and say, in essence, “Don’t just take my word for it, here is some 18th-century people who have said something similar.” They wouldn’t say exactly those words, but something to the effect of, “Well let me show you what William Byrd said about this very subject, or let me show you what Philip Fithian, who was a tutor, said about that very subject.” So that is very helpful for the guests, and the interpreters. And sometimes you have some folks who believe what they believe, and it is very difficult to change that belief, and you just agree to disagree and continue to have a good learning experience.

Lloyd: About how long does it take before you think maybe you ought to pull somebody back in and give her or him some retraining? Is there some sort of standard time?

Rose: We don’t really have a standard time, but in that first introduction to interpretive training I was telling you about, they have to “clear” at the end of that 10-day training, which means they have to stand up and actually give an interpretation. So we can tell right then if there are some people who may need a little bit more help in presentation skills, or a little bit more help in the knowledge, and we pass that on to their supervisors, and then we work with the supervisors to get them the information they need.

Lloyd: Last question, I think, how long do you know, generally speaking, will an interpreter stay with you?

Rose: Wowâ€¦hmmmâ€¦I would say about five to10 years.

Rose: When folks come and get in their niche, they really, really enjoy it. As a matter of fact, I came here looking for a summer job 20 years ago, and this is my 20th year. I just got so fascinated and so impressed by all the things that Colonial Williamsburg has to offer, both behind the scenes and to the guests. The learning package, the way I was trained, the library facilities, educational facilities, and I just stayed. I always wanted to teach, and so now I am teaching in a different type of setting.