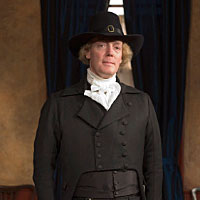 Lloyd Dobyns: Hi. Welcome to Colonial Williamsburg: Past & Present. The stuff is new, and you won't hear it anyplace else. What we want to do at first is get you "Behind the Scenes" and let you meet people who work here. That's my job. I'm Lloyd Dobyns, and mostly I ask questions. This time, I'm asking Bill Barker, who at Colonial Williamsburg is Thomas Jefferson.

Lloyd: How long have you been the interpreter for Jefferson?

Lloyd: This is an insulting question and you can react that way if you want to. You live it 24 hours a day. You live on Duke of Gloucester Streetâ€¦have things in your house that remind you of himâ€¦do you ever get confused?

Bill: (Laughs) No, and if I should be confused, who better to be confused with than Thomas Jefferson.

Lloyd: That's true. I did a little acting as a kid, and I know what it is to get into character. So when you are out and about you have to be Thomas Jefferson; you can't even think about being Bill Barker.

Do you ever have a moment when you would say to yourself "Gee, I'd just like to go drink a cup of coffee now."?

Bill: Oh sure, but then so did Thomas Jefferson. So the mundane things that we take for granted every day we should realize in our interpretations have been the mundane things that people have done for centuries, so when I feel thirsty and want to get a drink of water or get a cup of coffee or a cup of tea, I know that Mr. Jefferson would do the same thing, so I just follow it through in character when I am in the public.

Lloyd: Do you ever break out of character?

Bill: Only in special occasions, I break out of character in programs we do for our donors in the Tucker House to help them understand a little bit about what we do to create the character. The use of primary documents, things they might not normally know about and furthermore in exposing it, to treat them to the opportunity to go in search of that, to help them go into the Rockefeller Library if necessary and look up primary documents, or become more acquainted with the character through history books and eyewitness accounts of the period.

Lloyd: How closely do you try and keep up? There's been a lot of new scholarship about Jefferson - new books, do you read them or are you afraid that you'd go outside the time frame?

Bill: That's an excellent question, because what does happen in reading contemporary authors is you have a propensity to go out of the time frame of his life, and to almost subject yourself to what we call "presentism," which is to put upon the past what we take to be quite obvious today or second nature to us today. The past was a different world, and so therefore in character interpretation, it is necessary to stay within that world, to acquaint yourself as much as possible with that world, and yet to understand that many things do not change, the more things change they remain the same as the statement goes. So, we can talk about things that are occurring today from the past. And, yet staying in the past helps to remind people well, these are the continuing arguments as they have been from even the ancient times.

Lloyd: What year, or what period do you try to stay in?

Bill: Well, fortunately, I am able to interpret Thomas Jefferson not only in his revolutionary years - the 1770s - but also in his presidential years, or at least that's applicable the presidential years for this time - 2005 - because we are 200 years to the date that Mr. Jefferson was president.

I interpret the revolutionary Jefferson for the most part in the mornings in our Historic District - in the Palace Gardens, in the Capitol, in the Raleigh Tavern, Wetherburn Tavern. But in the afternoon, I am able to interpret President Jefferson, move out of the revolutionary period in Williamsburg's modern venues - the Kimble Theatre, for instance, or the Hennage Auditorium in the DeWitt Wallace Gallery, or even in the St. George Tucker House, which was not here in the 1770s. St. George Tucker did not build his house nor purchase the property until 1788.

Lloyd: So you've even got segments that you do.

Lloyd: That makes it a little tougher.

Lloyd: When people ask you questions on the street, what do they tend to focus on, what are they curious about?

Bill: They are curious about Mr. Jefferson's personal life, of course, as everyone is curious about someone else's personal life. We want to know about one another, inquiring minds want to know. They are curious about what they've always heard to be the Jefferson hypocrisies. "You speak on behalf of the rights of man, natural rights, and yet you own slaves. You were said to be an atheist and yet you wrote a statute of Virginia for religious freedom. Do you believe in God? What is your religious opinion?"

These sorts of things were actually in Jefferson's lifetime. He was accosted about these things, accused of this sort of thing while he was alive. So to understand it in his day is to help answer it today.

Lloyd: I had not thought of that, that obviously no one left him alone when he was president. Let's see, they gave him a Supreme Court Justice he didn't likeâ€¦

Bill: Absolutely, who was his second cousin twice removed, John Marshall. And he said later on in life, this is when he was in his late 70s, in the 1820s, he said "the argument over religion has been the most severe of my entire life," and I find that to be a recognition even today that this is a severe argument that we are having over this today. And yet, happily, because of Mr. Jefferson, we are able to contest it; we are able to offer our opinions freely over it, and imagine we have gone two centuries without a war or bloodshed fought over a difference of religious opinion in the United States. That's remarkable.

Lloyd: It is when you think that most of wars fought throughout mankind have been for religious reasons.

Bill: Or religion is the excuse.

Lloyd: Yeah, quite often it was the excuse that was used. I was just curious, has anyone ever just refused to accept what you said when you were speaking as Thomas Jefferson about religious freedom?

Bill: Oh absolutely. Just as they would not accept what he said 200 years ago. They had their minds set, and that is what they are going to think and what they believe, and when they hear Mr. Jefferson speak, it is as if they were reading the same in a book and so just the way they received it in a book, they are not going to receive it any more in real life, so to speak.

Lloyd: Now that I had never thought of, that they just don't believe you.

Bill: No, but at the same time, it provides a great energy. I mean it really does, to say hey, you know this is as real today as it was 200 years ago, and the fact that Jefferson knew this was as real in 1805 or 1775 as it was 200 years before that, or a thousand years before that. Jefferson used to think of himself as an antique Roman, and these were concerns that he knew the ancient Romans contended with thousands of years ago.

Lloyd: And we are still at it.

Bill: And we are still at it; it's the nature of man, but you know we've progressed. We are thankful to Mr. Jefferson, and many others. Mr. Hamilton, I daresay Mr. Hamilton, perhaps; George Washington - all of those who really did help install what they call the new order of the ages, that now we are giving mankind a chance to pursue self government rather than subject himself to monarchy, and I think there have been many improvements in 200 years, which is an awfully short time in human history to make such improvements.

Lloyd: It is a short time in human history, and I was trying to remember the quote from Ben Franklin about that we would some day turn to despots to lead us. I found it about two years ago, and I have just clung to it ever since.

Bill: Yeah, but then Mr. Franklin, or Dr. Franklin, I suppose we should say, also mentioned to a lady when he came out of the Statehouse in Philadelphia after the Constitutional Convention, she asked of him, "What were you doing in there? What have you created?" He answered "A republic, madam, if you can keep it."

Lloyd: That's Colonial Williamsburg: Past & Present this time. Check www.history.org often. We'll post more for you to download and hear.